The United States has had a rich history of coins, and considering the rarity of the old ones, most of them are priced quite high nowadays. But some represent special historical events and hence hold even more significance. One such coin is the George Washington bicentennial quarter produced during the 200th independence anniversary in 1975. The cultural changes in America that began in the 1960s were carried on to the 1970s when America celebrated two centuries of the Declaration of Independence through bicentennial quarters with the dual date of 1776-1976 featured over it.

History Behind the Production of 1776-1976 Quarter Dollar

As the United States of America was ready to celebrate the 200th anniversary of the Declaration of Independence, these coins were in production a year before their release. The production of these commemorative 1976 coins began on July 4, 1975. Mints were ordered to produce them in billions.

Moreover, some different silver quarter compositions and special finishes were designed for coin collectors. Over the course of eighteen months before their release, several billion of the 1976 Bicentennial quarters were made. Let’s roll through the production of both business strike and special edition coins in detail.

* The 1980s saw millions of silver Bicentennial quarters melted or demolished, leaving very few and rare ones behind. Even though there are still plenty of them, the number is nowhere near the original 15 million.

Most people don’t know, but these valuable coins only hold a premium value if they are in uncirculated condition. If you have 1776-1976 clad quarters in standard circulated condition, they are only worth their face value, which is $0.25. On the other hand, if your 1776-1976 S proof quarter is in mint state or Proof 65(PR 65) condition, it can be worth around $5 or a lot more.

Value of Silver Quarter with Errors

A coin with errors has a high chance of getting sold at way over its face value. Depending on the condition and type of error, you can sell it at a good price, starting from five dollars and thousands of dollars. A perfect example would be a recently sold 1976 D 25C Bicentennial quarter graded MS65. The coin titled DDO FS-101 (doubled die obverse) was sold for almost $4000 during an auction.

Another example is a 1976-D 25C Bicentennial quarter graded MS67 that went for over $5000 during an auction. It was struck on a nickel planchet mint error. While the dual dates and mint mark are quite visible, much of QUARTER and LIBERTY are invisible.

The three coins announced to proclaim the bicentennial in 1975 included quarter, half dollar, and one-dollar coins. George P. Schultz, then Secretary of the Treasury, asked the Director of the Mint, Mrs. Mary Brooks, to design three coins that could honor the 200th anniversary of the American Revolution.

The production began on July 4, 1975, for these new commemorative coins that Treasury Department discontinued earlier in 1954 due to some special interest groups and politicians that abused the commemorative coin program back then.

Who Designed the Reverse Side of Washington Quarter 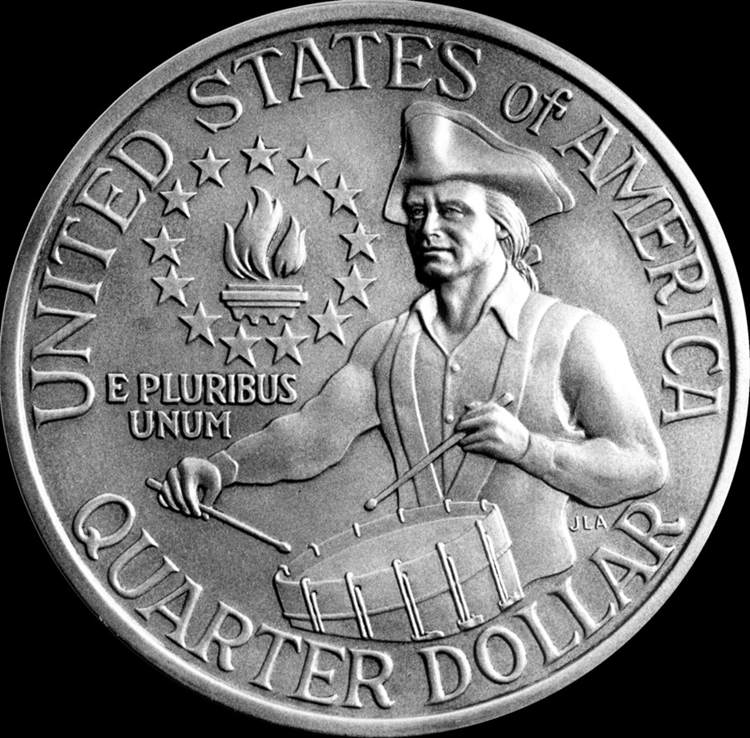 The early 1970s were full of great triumphs for Americans since the country celebrated its bicentennial Independence anniversary in a multi-year event. Apart from thousand other things, the Treasury Department decided to roll out the first-ever circulating commemorative coins to make the 200th anniversary of the signing of the Declaration of Independence memorable forever.

The department took help from the National Sculpture Society, directing them to conduct a nationwide design contest among its members. A jury of experts was appointed to judge several thousand designs submitted for each denomination.

Finally, the design selected was from Jack L. Ahr, who won the contest in 1975. We can say that the first ever bicentennial quarters were made with Ahr’s design.

Later in 1976, Seth Huntington and Dennis R. Williams were also invited to design half-dollar and dollar reverse. There were later controversies over the design when Ahr was accused of copying from a 1973 stamp from William A Smith. Even then, the design is already in circulation and still remains over the 1776 to 1976 quarter dollar.

Since most bicentennial coins are in circulation, not many coin collectors are attracted to the standard 1776 1996 bicentennial quarter. Additionally, most of the special edition coins were either melted or not kept properly by collectors.

The special edition silver bicentennial quarters were made and mostly purchased directly from the United State Mint by individuals or collectors. But lack of ideal storage conditions ended up damaging most of the special edition quarters.

Some of them might still be inside boxes that ended up in basements or attics. Moisture and inappropriate temperature cause corrosion and toning in these silver quarters. If you are looking to collect bicentennial uncirculated coins, avoid buying the ones with a haze on their surface.

How to know if I have a silver bicentennial quarter?

Coins have special markings that define the material used to create them, especially coins made for special events such as the 1976 bicentennial quarter. The usual 40% silver coins are easy to identify due to a thin line of grey silver blended with white nickel found in the coins. If the thin line you see on your bicentennial quarter is a whitish nickel mixed with reddish copper, you probably have a copper-nickel clad coin.

Are there any rare Bicentennial quarters?

With over 1.6 billion coins made only worth face value and distributed just between Denver and Philadelphia mint facilities, it’s not rare to find bicentennial quarters as pocket change. Many predicted them to be valuable in the future for honoring such a big occasion, but you can easily buy some collector-quality quarters from your local coin dealer.

Still, it’s also important to know that most of these were business strike coins meant for circulation. Nicely struck, high-quality bicentennial quarters are still rare to find. Since the United States mint was under pressure to increase the quantity, they had to sacrifice the quality in most.

Where is the Mint Mark on a Bicentennial Quarter?

What year of quarters have the highest value?

Quarters have been manufactured with similar face values since the 1970s, but coins manufactured in 1964 or before were made of 90% silver alloy, making them worth much more than their original face values. If you have quarters dated anywhere from 1796 to the 1890s, you may have the rarest ones in the USA.

What are bicentennial dollars worth?

Kennedy Bicentennial Half Dollar Worth 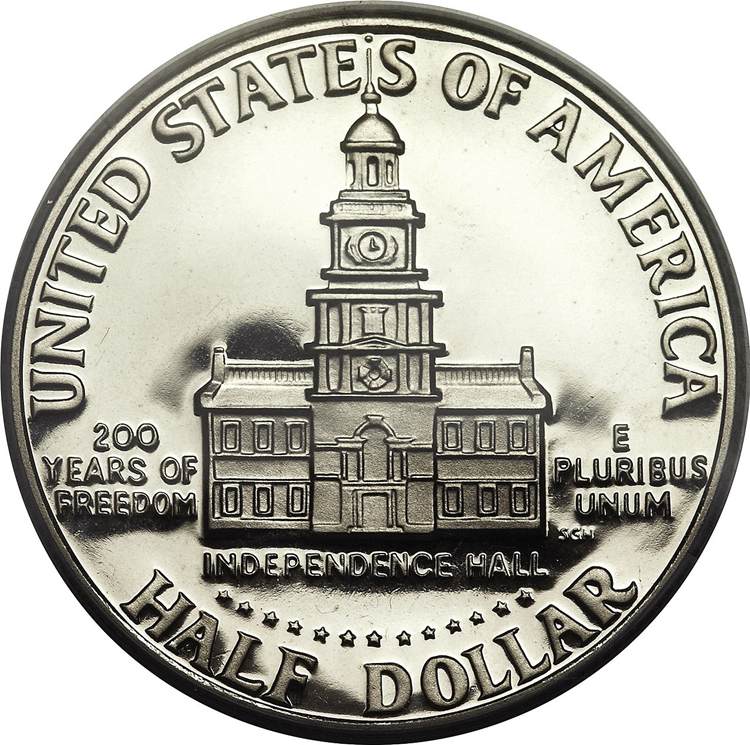 As mentioned earlier, most standard coins are worth face value only in circulated condition, and this includes the $0.50 Kennedy 1776-1976 half dollars. However, if you have Kennedy bicentennial S proof half dollars in PR 65 condition, it carries a value of around $4.

The reason these are also popular as Washington quarters is because they feature a bust of President George Washington. The reverse of the coin features thirteen stars encircling a victory torch on the upper left side along with a left-facing Colonial drummer.

The obverse remained the same for the Washington quarter, the Eisenhower dollar, and the Kennedy half dollar with the only change of dual-date of 1776-1976. The reverse, however, was different, with winning designs by Jack L. Ahr on the Washington quarter, Seth Huntington on the Kennedy half-dollar, and Dennis R. Williams on the Eisenhower dollar.

How to Determine Your Silver Dollar Value?

A silver dollar’s melt value determines how much it’s worth. When melted, the mass and rarity of the silver found in the coin can give its exact value. The year manufactured can provide a lot of information about a coin’s value. For instance, the 1794 Flowing Hair Silver Dollar, which is also the first ever silver dollar struck by the United States, can value in millions. In fact, a coin dealer named Bruce Morelan spent $10 million to own one of these in 2013.

Top 5 most expensive quarters ever sold

Here is a list of the top 5 most expensive quarters

Highest Worth Quarters in Circulation

While mostly uncirculated quarters hold the premium value, there are few in circulation quarters sold very high than their face value.

What’s the most expensive coin in the world?

Value of a Gold Sacagawea Coin

Minted in billions since 2000, the regular Sacagawea coin still has the same value of worth $1. However, a few special varieties, such as the 2000-P Cheerios, attract coin collectors and may have a little higher worth than the face value.

Here we conclude everything about the famous 1776 to 1976 quarters while also shedding some light on other expensive antique coins. Coins often cross their face value as the material used in minting reaches a higher value in the market.

Bicentennial quarter and other coins with silver are not common now, but they have been around earlier and now have a special value among collectors. To get more information on coin worth, keep following our blogs.