Do you have a 1776 to 1976 Silver Dollar? If you do, you may be wondering what its value is. While the answer to that question can vary depending on a number of factors, such as the condition of the coin, generally speaking, these coins are worth quite a bit of money. In fact, some collectors are willing to pay hundreds or even thousands of dollars for one!

So if you have one (or more) of these coins sitting around, it might be worth your while to take a closer look at it and see how much it could be worth. Who knows? You could end up with a nice chunk of change in your pocket!

Dwight D. Eisenhower was an important figure in American history. He served as the 34th president of the United States from 1953 to 1961, and led the country through a period of economic prosperity and Cold War tensions. As such, Dwight D. Eisenhower was a crucial leader during a pivotal time in American history. Through his actions, he helped to shape the country into what it is today. 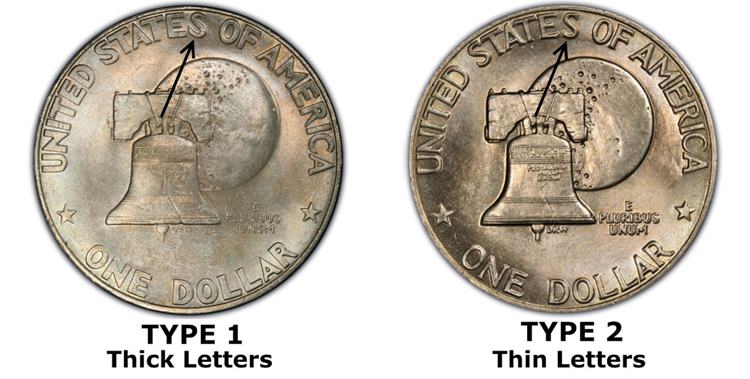 The Mint produced two types of clad dollar coins – Type I and Type II. The main difference between the two is the lettering on the tail’s side of the coin. Type II dollars have crisper, more refined lettering than their Type I counterparts. They are also much more common, which is why you’re likely to see more of them in circulation. So, if you’re ever lucky enough to find a 1976 dollar coin, be sure to check the lettering

Many people believe that all 1776-1976 Eisenhower dollars are silver coins. However, this is not the case. With a little research, it’s easy to tell the difference between the two types of coins and avoid paying too much for a base metal coin masquerading as a silver dollar.

Here’s an overview of the numerous Eisenhower Dollars and their mintages from 1776 to 1976:

A lot of silver dollar coins were melted after 1982, which means their real number is much lower than reported.

How to Know if You Have a Real Silver Dollar Coin?

Many people don’t know the difference between a copper-nickel coin and a silver coin. Here are a few things to look for when trying to tell the difference. First, Eisenhower silver dollars usually have a little S mint mark between Ike’s portrait and the date. Also, silver coins will generally look shinier than copper-nickel coins. This is because silver is a much more reflective metal than copper.

When it comes to collectible coins, there are many factors that can affect their value. One of the most important is the condition of the coin.

The Sheldon Scale is the most common way to numismatically grade United States coins. Coins are graded on a scale of 1 to 70, with 1 being the lowest grade and 70 being the highest. The Sheldon Scale is an important tool for numismatists because it provides a consistent way to evaluate coins. When two people are looking at the same coin, they can use the Sheldon Scale to agree on its value.

When it comes to Eisenhower silver dollars, there are some grades that are most valuable:

Whether you’re an experienced collector or just getting started, familiarizing yourself with the Sheldon Scale is a good way to ensure that you’re always getting the most out of your hobby.

Before we take a closer look at the silver Ike dollar coin values, let’s take a look the regular bicentennial dollars. 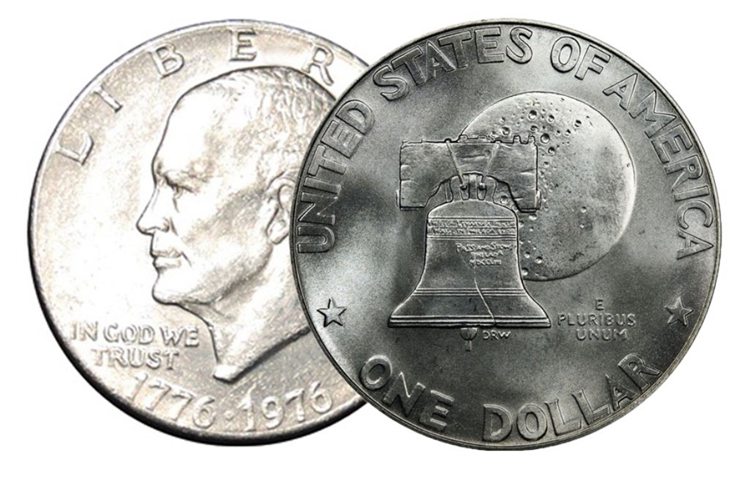 The Type I clad dollar was minted at the Philadelphia Mint, with a total of 4,019,000 being produced. These coins do not have a mintmark, and are typically worth around $2 in circulated condition and $10 to $20 in uncirculated grade.

However, if the coin has an error, it can be worth significantly more. The most expensive Type I clad dollar sold for an amazing $28,200, as it was overstruck with a 1976 Bicentennial Quarter. Of course, these are really rare examples and most Type I clad dollars won’t be worth that much.

Let’s take a look at some of the more common examples sold recently on eBay: 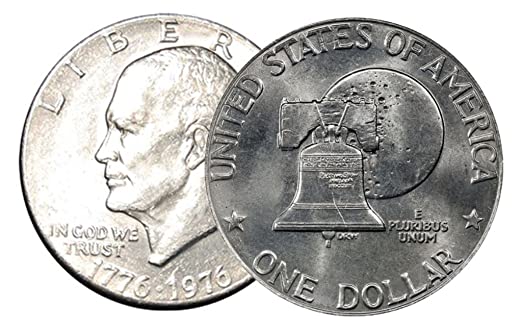 These coins are worth around $1, but can be worth $4 to $10 in uncirculated condition. Interesting errors can raise the price tag, for example a double struck coin sold for $8,050 in 2007. So, if you come across one of these coins, it might be worth taking a closer look!

The D Type II dollar has the same price. It has the mint mark D on the obverse, which signifies that it was made at the Denver Mint. These coins are worth around $1, but uncirculated pieces can take $4 to $10. The most expensive one was sold for $3,600, but these are one-of-a-kind examples.

The 1976 S Type II clad proof dollar coin is a highly sought after collector’s item, with a limited mintage of just over four million coins. These coins are now worth between $8 and $12 dollars each, depending on condition. The most expensive coin in perfect condition has sold for over $20,000.

Let’s take a look at some of the more common examples sold recently on eBay: 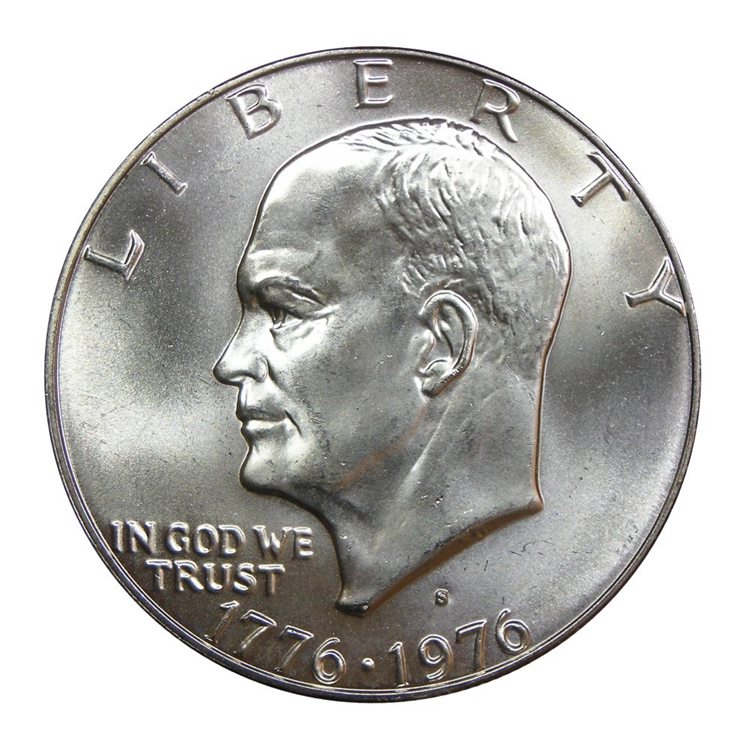 While most Bicentennial silver dollars are worth around $12 to $15, some coins in pristine condition can be worth hundreds or even thousands of dollars. Errors can also add to the value of a coin, so collectors should be on the lookout for these rare gems.

Let’s take a look at some of the sold examples:

This coin was graded MS-69 by Professional Coin Grading Service (PCGS), meaning it is virtually flawless. It also exhibits what is known as “satin luster,” a highly desired trait among collectors. In addition, the coin’s design features are exceptionally well-defined, making it a truly outstanding example. Given its condition and attributes, it’s no wonder this coin sold for $4,560.

In 2011, a 1976-S dollar coin sold for $3,737. This coin is a non circulating Type I Silver Proof PR70, which is a very rare type of coin. The coin’s surfaces are perfect and there are no flaws, even when examined under a microscope. A similar coin sold for half the price a few years later.

What is the Most Expensive Eisenhower Silver Dollar Sold? 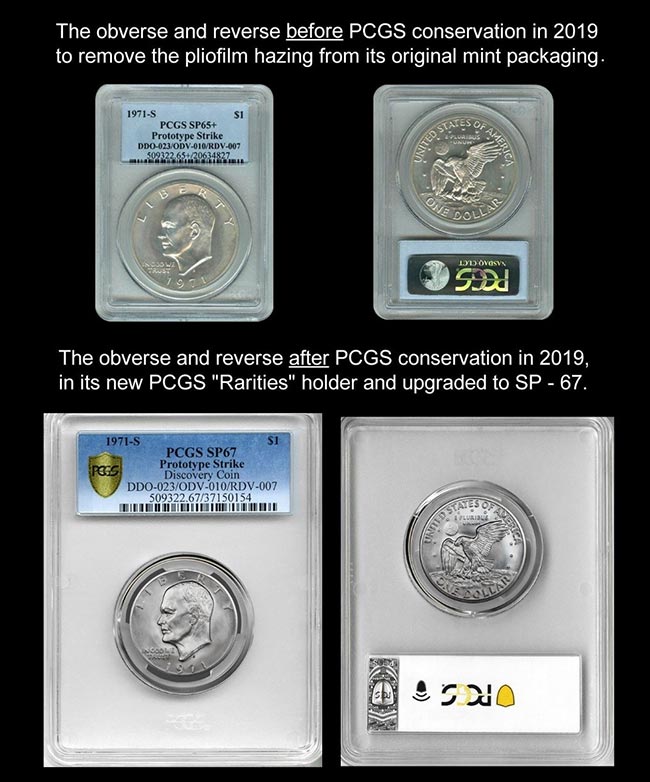 A prototype coin is a sample of a proposed coin design. They are usually minted in small quantities and are not circulated. Prototype coins are often created as part of the process of designing a new coin, and they can be used for testing or for promoting the new design.

The coin pictured is a stunning example of high relief medallic art, with beautiful doubling evident on the motto and date. This coin was graded SP-67 (Specimen) by Professional Coin Grading Service and labeled as “Discovery Coin”, signifying its rarity and desirability. It is truly a collector’s item and would make an excellent addition to any collection.

Heritage Auctions is generally considered to be the best option for selling Eisenhower silver dollars. They have a large network of potential buyers, and they are able to get top dollar for coins in perfect condition or with errors.

Ebay is another great option. This online marketplace is a popular destination for coin collectors, and you can reach a wide audience of potential buyers by listing your coins here. Plus, eBay makes it easy to set up your listings and track your sales.

Another option is to sell them through a local coin dealer. Coin dealers typically have a knowledge of the Eisenhower dollar market and can offer guidance on pricing and marketing the coins. Apmex is a great website that can help you find coin dealers near you.

Finally, bicentennial dollar coins can also be sold directly to collectors. This option allows for the greatest degree of control over the sale, but it may be more difficult to find interested buyers. You can find collectors on dedicated forums like the Coin Talk and the Coin Community.

If you have 1996 Eisenhower silver dollars to sell, there are a few things you can do to maximize your profits:

By following these tips, you’ll be well on your way to making a successful sale.

Which Eisenhower dollars are 90% silver?

The limited-edition Eisenhower Centennial Proof Silver Dollar is the only Eisenhower dollar that is 90% silver. This coin was created to commemorate Dwight D. Eisenhower’s birth on his 100th birthday and features a portrait of Ike on both sides of the coin.

While most of these bicentennial dollar coins were struck in copper-nickel, only a small number were made with silver.

Just like any other coin, the value of a silver dollar is based on a number of factors, including rarity and condition. Generally speaking, the rarer the coin, the higher its value will be. The same is true for coins in good condition – those that have been well preserved will typically be worth more than those that have been damaged or show signs of wear and tear.

The mint mark on a 1776-1976 silver dollar is located on the obverse, beneath Eisenhower’s bust. The mint mark indicates which USA Mint produced the coin. Coins from the Philadelphia Mint do not have a mint mark, while those from the Denver Mint have a D mint mark. The San Francisco Mint produced some of these dollars for special collector sets, and those coins have an S mint mark.

In 1976, the United States Mint released a special dollar coin to celebrate the bicentennial of the United States. While regular circulated coins aren’t worth much, silver coins are minted in limited numbers and can be worth a lot.

The value of a 1776 to 1976 silver dollar depends on several factors, including the condition of the coin and the current market price for silver. In general, most bicentennial silver dollars are worth around $12 to $15, but some coins in pristine condition can be worth hundreds or even thousands of dollars. As a result, the value of Eisenhower dollars can vary significantly depending on its individual characteristics. Thanks for reading!

I have a Eisenhower silver dollar type 2 that's in good condition. Would like to sell.