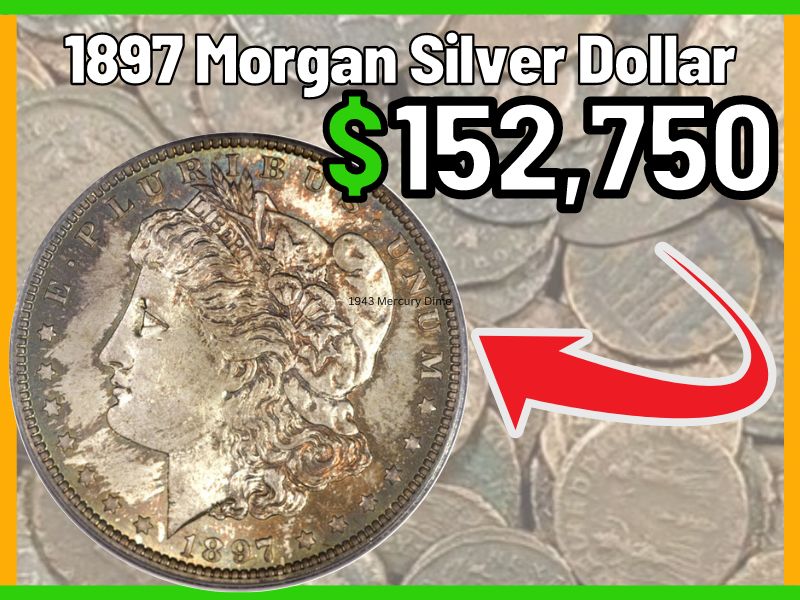 The value of a coin depends on several factors such as its condition, date and mintmark. If you have ever wondered how much is a 1897 Silver Dollar Worth, keep reading. This article is packed with a lot of information about the 1897 Morgan Silver Dollar. 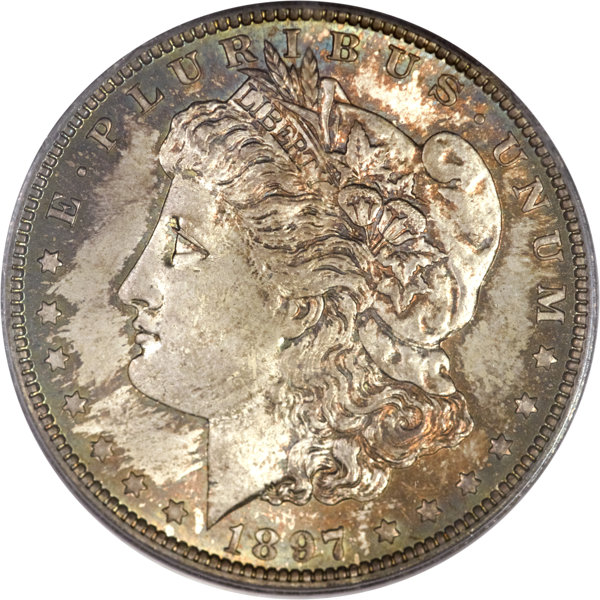 The Morgan Silver Dollar is among the most popular and widely collected coins in the world. It was first minted by the US federal government back in 1878 and has been struck every year since then. The series of silver dollars was originally designed by George T. Morgan, hence the name we use today.

Collectors cherish the Morgan Silver Dollar because of its historical significance and enduring design. The coin was originally introduced in the late 1870s and was an immediate hit with the American public. This is because its design was superior to that of previous Silver Dollars.

Unfortunately, due to the age of these coins, there will never be enough for everyone who wants one. That is why now is the best time to get your hands on these coins.

The Morgan dollar is a United States dollar coin created in 1878 and minted until 1904, as well as again beginning in 2021. It was the first standard silver dollar minted since the passage of the Coinage Act of 1873, which ended the free coining of silver and production of the previous design, the Seated Liberty dollar.

The Bland–Allison Act, passed in 1878, authorized the dollar. Mining interests lobbied for free silver, which would require the Mint to accept all silver presented to it and return it, struck into coins. The Bland–Allison Act, passed instead, required the Treasury to purchase between two and four million dollars’ worth of silver at market value each month to be coined into dollars.

Production of the coins did not start until March 11, more than a week after the passage of the Bland–Allison Act. The first acceptable strike was coined at 3:17 p.m. at the Philadelphia Mint.

In 1897, the Philadelphia Mint struck only 2.8 million Morgan dollars after striking nearly 10 million the year before. Most of these coins were not put into circulation at the time. Until the “Great Treasury Release” of silver dollars in the early 1960s, the 1897 Morgan silver dollar was a major rarity.

PCGS estimates that approximately 280,000 Morgan dollars minted in 1897 are still in existence today. Of these, 100,000 are Mint State. The population of coins at grades MS65 and above is thought to total only 6,550 coins.

The Morgan Silver Dollar is a treasured relic from America’s western frontier. Its historical significance and outstanding design make it appealing to collectors. English engraver George T. Morgan, 30 years old in 1876, had studied under Leonard Charles Wyon of England before coming to America and was ready to revamp American silver dollar coinage. From the fantastic design on the Morgan Silver Dollar, we can all agree that he did a great job. 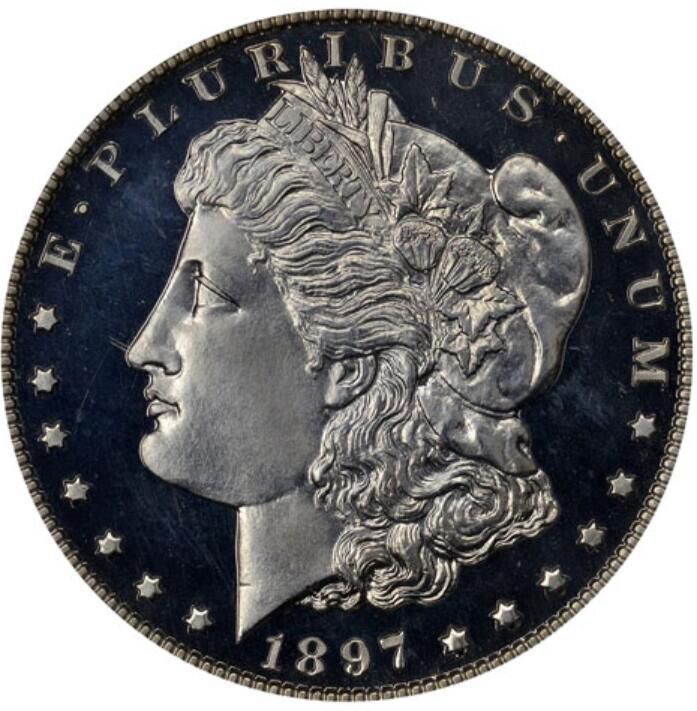 The obverse of the coin is a profile of Lady Liberty. Her cap includes a ribbon inscribed with the word “LIBERTY” and two cotton blossoms and two heads of wheat to represent American agriculture. The thirteen stars bordering the circle are symbols of America’s original thirteen colonies.

Look closely at the neck of Lady Liberty in your coin collection. You’ll likely see a tiny “M” at the base of Lady Liberty’s neck. That’s the initial for George T. Morgan, who designed the model for this coin. Above Lady Liberty’s head, the Latin motto “E Pluribus Unum” stretches. It is the unofficial motto of the United States and means “Out of many, one.” 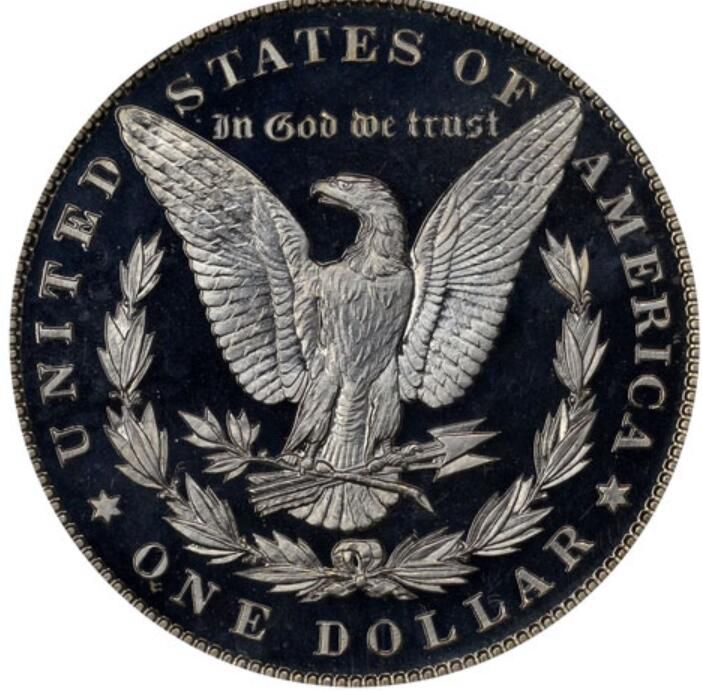 The eagle on the back of a quarter depicts an American symbol of freedom and peace. In one talon the eagle holds an olive branch while the other talon holds arrows, symbolizing that the United States is willing to defend itself if necessary.

Above the eagle’s head is the motto “In God We Trust.” Above that are the words “UNITED STATES OF AMERICA.” George T. Morgan’s initial “M” is on both sides of the coin, one tiny letter at the center of the laurel wreath on the reverse.

The mint mark, if one is present, will appear at the bottom of the design, between the laurel wreath and the words “ONE DOLLAR.”

Coins struck in the Philadelphia mint will not have a mint mark on the reverse. Only in some rare cases would you have the P mint mark appear on the reverse of some coins like the Lincoln Cent and a couple of other coins.

The Denver mint didn’t produce Morgan Silver Dollars until 1921. The New Orleans mint on the other hand produced a lot of silver dollars from 1879-1904. The “O’ mint mark on the reverse of the coin means the coin was struck at the New Orleans mint.

4,004,000 coins were struck in the New Orleans mint making the mint the second highest to strike Morgan Silver Dollars bearing the 1897 date.

Collectors of coins more than 100 years old are concerned with the condition of their coins—and with good reason! The condition of a coin influences its value, so it should come as no surprise that pieces in better shape are worth more. Additionally, the type of coin can affect the value, and it will have an impact on the asking price.

Because it contains a large amount of silver, your coin could be worth more than other dollar coins minted in 1897. The three mints that struck silver dollars that year were Philadelphia, San Francisco, and New Orleans.

Many people collect Morgan dollars struck at the New Orleans Mint, and those coins are hard to find today. Add in their popularity and the prices of these coins can be above their silver value.

As of September 2022, according to the NGC Price Guide, a Morgan Dollar from 1897 in circulated condition is worth between $28.50 and $52. The coin would be worth more on the open market, with pristine, uncirculated condition selling for as much as $16,000.

When determining the value of a coin like the Morgan Silver Dollar, many factors must be taken into consideration. Collectors tend to pay much more attention to a coin’s condition than they do to its denomination or year of minting.

Uncirculated: A coin described as Uncirculated is one that has never been used in circulation. Because it never exchanged hands like typical coins do, these coins will be extremely well-preserved and free from any damage. Collectors who purchase these coins are getting the best of the best, and they make an excellent addition to any collection.

Extremely Fine: If a coin is determined to be in Extremely Fine condition, it was circulated for a time, but not long enough for the coin to become noticeably worn or damaged. Some coins in this collection may have some light surface damage that is visible only upon close inspection. Other coins are in great condition, so they’re perfect for a variety of collector’s needs.

Fine: If a coin is in Fine condition, it means that it was circulated quite extensively but avoided most damage. These coins will have had their surfaces worn down to the point where they are smooth to the touch, but you’ll still be able to notice the images and inscriptions on them.

Good: A coin that has received this grade has been heavily damaged and is usually considered unfit for circulation. Deep scratches, severe bending, and loss of detail are just some of the problems that may afflict a circulated coin in this condition. In spite of all this, circulated coins like these are still worth collecting—especially if you can get them for a good price!

The 1897 Morgan silver dollar is worth $30 in average condition, but can be worth up to $374 in uncirculated (MS+) mint condition. Proof coins can be valued at $3,218 or more. The 1897 is fairly common in circulated grades, with most of them being VF, EF, or finer. Apparently, well-worn examples are rare.

In grades of Mint State (MS) 65 and below, the 1897 Morgan dollar is common. However, in MS-65 it is not among the top 10 most common Morgan dollars. It is well struck and has satisfactory luster. Others can have grayish, greasy surfaces in grades from MS-60 through 63.

The 1897 Morgan dollar is plentiful by the “new” PL criteria used by the grading services. Most are low-contrast and have unappealing surfaces. High grade DMPL coins are somewhat elusive; about 10% to 15% of the DMPLs are above MS-64.

The 1897-O Morgan dollar, like other New Orleans Mint Morgans, is fairly common in circulated condition but becomes rare in uncirculated condition. Some Gem specimens have poor strikes, and uncirculated coins rarely have much luster. Thus, Gems are rare, though a handful survive up to MS67. PLs and DMPLs are very rare, and none are known in the grade of MS65 or higher. 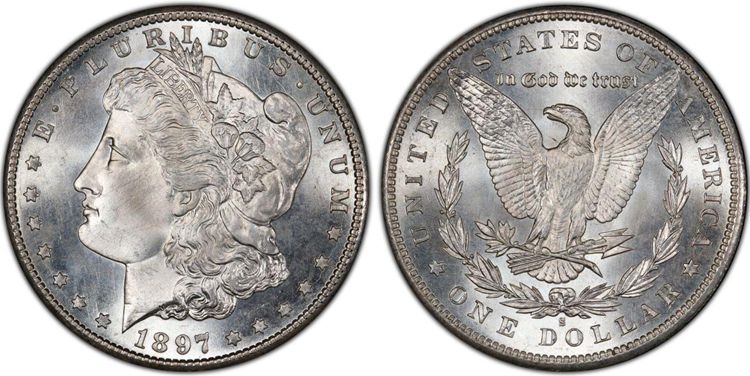 The San Francisco Mint is known for producing some of the rarest Morgan dollars in the series, but the 1897-S is among the San Francisco issues that are readily available in circulated grades and lower levels of uncirculated quality.

The 1897 Morgan silver dollar is a popular coin among collectors, but it can be difficult to find one in pristine condition. These coins were made for circulation, so they often show signs of wear and tear when you see them in person. If you have an 1897 Morgan silver dollar that’s worn out or damaged, you might want to consider selling it. If so, check out these tips on where to sell your coin.

eBay is a great place to start looking for buyers for your Morgan dollar. You can also use it to research prices and trends for this particular coin. If you’re considering selling your Morgan silver dollar, you might want to check out eBay’s “completed listings” feature first. This will allow you to see what other people have been asking for similar coins recently. It’s also a good idea to look at the “buy it now” prices on eBay and see what they are offering for different coins in different conditions of wear and damage.

If you’re interested in getting top dollar for your Morgan silver dollar, contact a reputable coin dealer who specializes in rare coins. The dealer will know the current market value of your 1897 Morgan silver dollar and give you an idea of what they think it might be worth in the future based on current trends and demand for coins like yours. Most dealers will offer free evaluations and give you their best price up front so there won’t be any surprises later on.

Online auctions are another great way to sell your coins and make money off them! eBay is probably the most popular place for selling coins online, but there are other sites out there as well if you want more options. Just make sure that whatever site you use has good reviews from people who’ve used them before so you know what you’re getting into!

Here are other online auctions to get good value for your 1897 Morgan Silver Dollar;

Today, we see the Morgan Silver Dollar as one of the most sought after coins in American numismatics. I’m not going to lie, your Morgan Dollar silver coin is likely worth a fair amount of money. Seeing as it was minted right around the turn of the century…that’s not too surprising. But how much? We can only estimate what its actual value would be.

As you can see from the price chart in this guide, the 1897 Morgan silver dollar value is highly influenced by its condition. Getting an accurate Morgan dollar value requires a few details before you can do the calculations. That includes grading your coin.

Bottom line – you’re Morgan Dollar in average condition is worth between $16 and $52 today.