A 1952 wheat penny falls in the category of low-value coins, but some varieties can sell for several thousands of dollars. Common ones with no mintmark go for around $0.11 in very fine condition, while you can get up to $3.30 for one with an MS63 grade.

On the other hand, 1952D wheat pennies have the lowest value of the series, with one in very fine condition selling for $0.11 and another with an MS63 grade going for $2.28. The pennies have similar values at lower grades, with a significant difference at the highest grades.

1952S wheat pennies are worth around $0.17 in very fine (VF-20) condition. However, they can fetch as much as $4.52 for an MS63 grade. The difference in value is mainly because this variety has the lowest mintage of the standard ones. 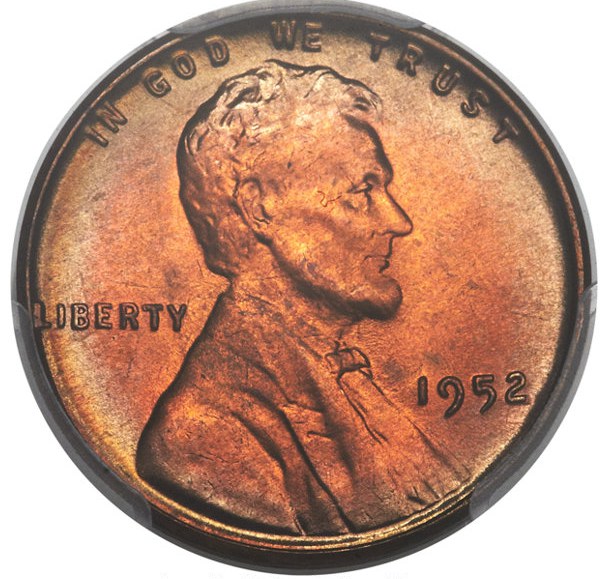 When it comes to popular coins among collectors, the Lincoln wheat penny remains one of the most acknowledged. As such, it is quite common to find almost all of this series in the category of low-value coins.

Nevertheless, this does little to undermine its importance to collectors, and finding any of the rare ones in pristine condition can yield surprising prices at auctions.

Although the series has undergone a few redesigns for its reverse, its obverse remained the same throughout the years. That makes it quite easy to recognize and differentiate from a counterfeit.

Production of the Lincoln wheat penny started in 1909 when it replaced the Indian Head penny. While Victor David Brenner designed the coin, late President Theodore Roosevelt initially contracted Augustus Saint-Gaudens for the project.

Saint-Gaudens was contracted to redesign the double eagle ($20), eagle ($10), half eagle ($5), quarter eagle ($2.50), and the cent. However, he could only submit designs for the gold eagles before his death in 1907, leaving the cent’s redesign unfinished.

This incident created a vacancy for the cent’s project, prompting the late President to recommend Victor D. Brenner for the redesign. The year featuring the centennial of Abraham Lincoln’s birth and with several citizens urging the need for a coin to honour the late President, the opportunity presented itself.

However, Brenner’s first submission was rejected by the mint director, who found out that the reverse design looked exactly like the one on French silver coins. Fortunately, Brenner’s next submission got approved, and the Mint swung into action, working swiftly to produce the first of a series that would have a place in every American’s heart.

The 1952 wheat penny had the composition of the more popular coins with 95% copper and 5% tin and zinc. It weighed 3.11 grams and measured a diameter of 19mm with non-reeded edges.

Familiarizing with the 1952 wheat penny features is important for grading the coin and even recognizing fakes.

A right-sided profile of Abraham Lincoln dominates the center of the coin, with its production year struck on the right area. The word “LIBERTY” lie on the coin’s left area, with the words “IN GOD WE TRUST” struck along the top of the profile.

The coin’s denomination “ONE CENT” is the first feature you will notice on its reverse, with the “UNITED STATES OF AMERICA” directly under it. Both inscriptions are flanked by an ear of durum wheat on either side of the coin.

Finally, the Mint’s famous motto “E PLURIBUS UNUM” is engraved along the coin’s top. The sentence is Latin for “Out of Many, One.”

Three facilities struck the Lincoln wheat penny in 1952 with a combined mintage of over 1 billion in the same year. 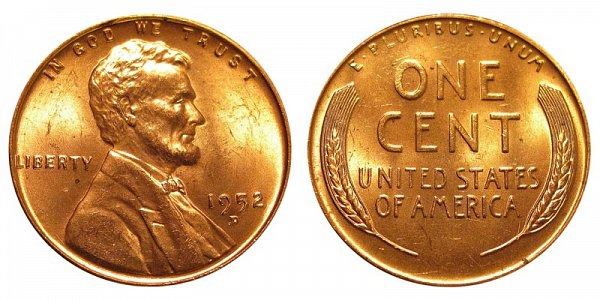 The Denver mint struck the highest number of 1952 wheat pennies with a total of 746,130,000. You can recognize coins from this mint through the ‘D’ mintmark present on either its obverse or reverse.

In this case, the mintmark is struck directly under the coin’s production year on its obverse. 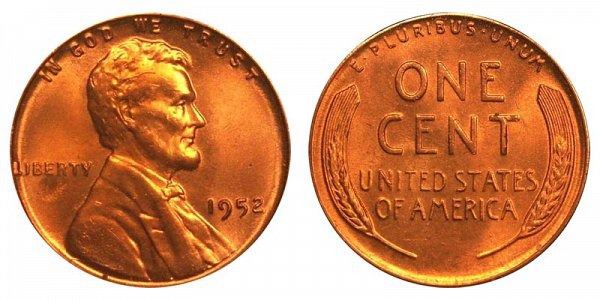 With a mintage of 186,775,000, the Philadelphia mint struck the second lowest of the series. Coins from this mint generally don’t carry a mintmark, which is true for the 1952 wheat penny.

The San Fransisco mint struck this variety with a total of 137,800,004, making it the lowest mintage of the wheat pennies produced in 1952.

Coins from this mint always carry the ‘S’ mintmark, making it easy to recognize them.

The Philadelphia mint also struck proof 1952 proof wheat pennies for collectors. With a total of just 81,980, this variety is the rarest of the struck 1952 pennies. As such, collectors value it more than the others, and you can sell one with a PR63 grade for as much as $55.

Any series with high enough mintage is bound to have multiple errors in all its production runs, and the 1952 wheat penny is not an exception. While collectors have identified several errors, only about three types are common to find.

The 1952 wheat penny is a common coin to find today because of its high mintage. With such numbers, the coin circulated well enough to remain easily accessible several decades later. However, most of the wheat pennies you will find will have a low grade as the ones in mint states are rarer.

When it comes to the proof variety, those might be quite challenging to find. First, because of their low mintage of just over 81,000 in total. Also, since the mint struck them specifically for collectors, you won’t find them in pocket change or circulation. Your best bet is an auction or online sale.

Furthermore, certain factors influence a coin’s rarity, and we will touch on them briefly below.

This term refers to the total number of coins struck throughout the production of a given series or variety. As such, it directly affects the availability of said coin. The reason is that a coin with a low mintage will not be as common as one with a high mintage.

Collectors generally agree that for a coin to be considered rare, it has to have a mintage lower than 10 million. In this case, it is around 1 billion in total, making it very common.

Even though errors are inevitable in every production run, they occur in significantly smaller percentages. For example, a production run of about 500,000 coins can have a total of just 800 with a particular error.

As a result of this, such coins are considerably rarer than standard error-free ones.

At low grades, the attached value to a 1952 wheat penny is similar regardless of the variety. Significant price differences show at higher grades, making the 1952S wheat penny the most valuable of the standard ones because it has the lowest mintage.

However, you will realize that these values remain different from the prices at which these coins sell at auctions. The reason is that certain factors and attributes play vital roles in determining a coin’s worth.

Factors that Affect a Coin’s Value

We mentioned earlier that knowing the features of a coin helps with grading it. Grading refers to categorizing a coin based on its physical appearance and level of preservation. It goes a long way to determine the amount that collectors would pay to acquire the coin.

Coins are graded based on the Sheldon Scale, which provides a comprehensive way to categorize them between the numbers 1 – 70. Each number represents a grade and has a set of attributes centred on physical appearance.

While we will not include the full breakdown in this post, we have compiled a simplified and broad version of the scale.

This condition covers every coin that has been exchanged or spent, hence the ‘Circulated’ title. We can break it down into three broad grades.

Coins with good grades have sustained heavy damage over the years and in the course of circulation. Features like Abraham Lincoln’s chin and hair have worn off completely, and you can observe discoloration with the naked eye.

Generally, this grade has the lowest value because you can no longer discern the coin’s distinct features.

The fine grade covers coins with slightly better physical appearances than the ones with the previous grade. While you will still observe discoloration and wear, other features like the words and dates are more vivid.

Most 1952 wheat pennies fall in this category.

This grade represents the best a coin can have in circulated condition. As such, all features remain intact and discernible, including a decent degree of intricate details on Lincoln’s hair and chin.

However, the coin no longer has the luster associated with freshly minted ones.

As its name implies, this condition exists for coins that have never been in circulation or spent. There are mainly two grades in this condition, and one is specifically for collectors.

Coins with this grade retain all the features from production, and higher levels also have the luster associated with freshly minted coins. Observing a coin in mint state under a single light source will reveal uniform coloration across its surface.

With all their features intact and vivid with luster, coins with this grade have the highest value of standard ones.

This grade is reserved for proof coins meant for collectors. It is usually associated with numbers equal to or higher than 60. A proof coin can fetch impressive prices at auctions depending on its total mintage.

We established earlier that mintage directly affects a coin’s rarity. However, this attribute further influences the coin’s value. The reason is that the rarer an item is, the higher its worth to collectors.

In this case, the 1952 wheat penny had up to 1 billion mintage across three minting facilities, making it common. Therefore, the coin has a low value because of its low rarity.

The presence of an error will increase a coin’s value regardless of the type. However, some errors had a significant increase than others. The famous 3-leg error is an example of a high-valued error.

Where to Sell Your 1952 Wheat Penny

There are a couple of options if you are looking for a place to sell your 1952 wheat penny. Since where you choose to sell also plays a role in potentially increasing the amount you get, it is important that weigh the various options.

Firstly, you can take the it to a local coin dealer or pawn shop. This option is not bad for low-value coins and if you are looking for some quick cash. On the upside, the coin dealer can also grade the coin for you if needed. However, there is a possibility that you will get less for the coin or simply its attached value.

The second and better option is to list your coin on an online platform that supports bidding. This way, you can get more value for selling the coin because several people can bid on it, with the sale going to the highest bidder.

Websites like eBay and Heritage Auctions are excellent choices.

The 1952 wheat penny is a popular coin and an excellent addition. You can start with the 1952D wheat penny when building your collection because it is the easiest to acquire among the standard coins.

After getting the others, you can then concentrate on getting the proof variety which is available on eBay.