While a 1957 silver certificate only goes for its face value, collectors find it more valuable than its equivalent worth in federal notes. Furthermore, you can sell it for a much more significant price if it has certain value-adding features.

This silver certificate is one of the most popular among collectors, making it quite easy to acquire. However, this does not reduce its importance in building a collection for those interested.

This article will cover its history, worth, and even the best places to sell one.

What is a Silver Certificate?

A silver certificate is a form of legal tender printed to represent its value in silver. This bill looks just like a regular federal note but with a number of differences. Firstly, the earlier notes were larger than regular notes but were later reduced to small-sized silver certificates.

Also, printed on the bill’s obverse is the sentence “IN SILVER PAYABLE TO BEARER ON DEMAND.” This indicates the note’s purpose in acting as a stand-in, allowing its bearer to own silver without carrying the precious metal around.

The bearer could redeem their certificates for silver or raw bullion.

History of the Silver Certificate

When the Coinage Act of 1873 was passed into law, it didn’t authorize the coinage of silver dollars, effectively ending the United States bimetallic standard. Two years after, individuals and corporations with investments in silver wanted the standard restored.

The reason is that the Act led to the demonetization of silver because it prevented people from having their silver minted into coins. Since the US only used the gold standard, the Act did not affect those with business interests and wealth accumulated in gold.

On February 28, 1878, Congress passed the Bland-Allison Act to respond to the situation. While it did not authorize free unlimited minting of silver into coins, the Act required the US mint to mint silver into coins. The United States Treasury would purchase the silver from Western mining companies at a volume of between $2 million to $4 million in silver bullion every month.

With the return of value to silver, people needed a way to own the precious metal without having to be in physical possession of it because of its weight. This led to the printing and issuing of silver certificates as legal tender starting in 1878.

While the certificates solved the problem, people started to distrust them, especially for individual transactions. The reason was that it was quite easy for anyone to pay to have them printed and used.

With a size of 3 inches wide and 7 inches long, these certificates were larger than standard federal notes. They circulated in denominations of $1, $2, $5, $10, $50, $100, $500, and $1000. Denominations lower than $10 were introduced later to help the certificates become suitable for small transactions.

During the 25-year run of large-size silver certificates, the bills carried portraits of past presidents, patriots, first ladies, and even artistic representations, as seen in the educational series.

Fun Fact: The educational series silver certificates are still considered to have one of the most beautiful and artistic obverse designs of United States notes.

These series are significantly smaller than the previous one. They went into production in 1928, about three years after Andrew Mellon, the Treasury Secretary, appointed a committee to investigate the upside of redesigning and reducing the size of US banknotes.

The committee carried out this directive and reported the advantages that included faster production speed, reduced cost, and lesser resource consumption. These findings led to the adoption of a smaller size for US banknotes, including silver certificates.

However, these certificates circulated in only denominations of $1, $5, and $10. They lasted for 29 years till production stopped, and they featured portraits of Abraham Lincoln, Alexander Hamilton, and George Washington on their obverse. 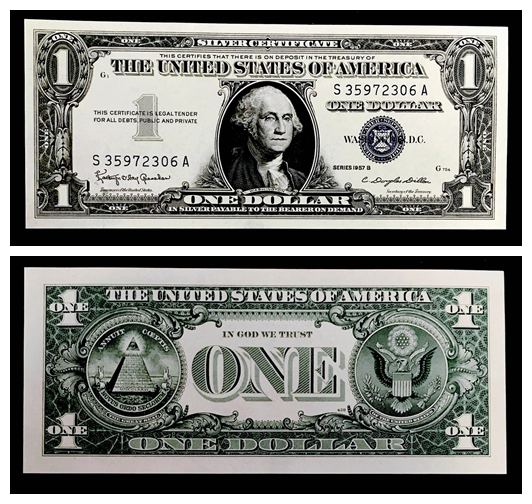 The 1957 silver certificate one dollar bill falls under the small-size silver certificates. In fact, it was one of the last issued ones. Its series carried the same features with only a difference in signatures and was only printed for $1.

Knowing the features of a currency or bill is important in recognizing a counterfeit. The following features are prominent on a 1957 silver certificate dollar bill.

The 1957 silver certificate carries a portrait of George Washington at its center, with a blue seal on the right side of the portrait. You will find the words “SILVER CERTIFICATE” boldly printed on the bill’s topmost area.

Finally, you will find the sentence “THIS CERTIFIES THAT THERE IS ON DEPOSIT IN THE TREASURY OF THE UNITED STATES OF AMERICA ONE DOLLAR IN SILVER PAYABLE TO THE BEARER ON DEMAND” printed on the bill.

The sentence is printed in two parts above and below the portrait. It differentiates a silver certificate from a standard federal note.

You will find the famous sentence “IN GOD WE TRUST” at the center and above the word “ONE.” Also, “THE UNITED STATES OF AMERICA” is printed at the top, while its denomination “ONE DOLLAR” lies at the bill’s bottom.

The seal is printed on the left, and an eagle with outstretched wings is on the right. The eagle clutches arrows in its right talon and an olive branch in its left talon, with a ribbon with the motto “E PLURIBUS UNUM” in its mouth.

Furthermore, you can perform a quick 1957 silver certificate serial number lookup to confirm if the bill is genuine or not. This is quite important for rare notes as counterfeits exist too.

How Rare is the 1957 Silver Certificate?

None of the 1957 silver certificate series are scarce. They are all quite easy to encounter today. However, this availability gives the bill a low value among collectors because rarity is one of several factors that influence a collectible’s worth.

One of the reasons why this bill is quite common is the large volume of its run. The 1957 silver certificate was by no means scarce during its days, and surviving notes are still abundant enough to meet the demand among collectors.

On the other hand, notes with unique features like errors or printing mistakes are not as common and, therefore, have a significantly higher value than standard error-free ones. Another type with higher rarity is the star notes.

Star notes serve as replacements for standard notes with errors identified during printing. While they are not common, you can easily recognize one through the presence of a star in front of the bill’s serial number.

Silver certificates with unique serial numbers are also quite valuable because they are not common and make cool additions to collections.

How Much is a 1957 Silver Certificate Worth?

We mentioned earlier that silver certificates are only worth their face value today. However, several factors contribute to a certificate’s value among collectors. Finding one with the right features and grade can fetch you a good price.

A silver certificate’s grade is the most crucial attribute influencing its value. The reason is that its grade represents how well preserved it is, including its physical appeal. Collectors use the Sheldon Numerical scale, which grades bills on a scale of 1 to 70, with the latter figure being the best grade/condition.

However, we have collapsed this comprehensive grading into four broad categories for easy understanding.

Good: A silver certificate in good condition has sustained heavy wear over the years due to frequent use or exchange. You will observe wrinkles and fading of its colors. Depending on the level of damage, some letters and features might not be recognizable anymore.

Nevertheless, the bill remains sellable since the most important and prominent features remain intact.

Fine: Although these bills in fine condition are visibly better than the previous one, they also show significant signs of wear and damage. Their colors lack the pristine nature of new or well-preserved notes.

Extremely Fine: This condition loosely covers up to four grades representing the best condition a bill can have in a circulated state. All the details and features remain intact and easily discernable to the naked eye.

However, the bill lacks the crisp feel of fresh mints.

Crisp Uncirculated: A bill with the highest grade of this condition has the highest value among standard silver certificates. As its name implies, the grade depicts a bill in excellent condition with its colors and features still intact.

Bills in the higher grades also retain the crisp feel of fresh notes, further increasing their value to collectors.

These are features that increase the value of a silver certificate. They add substantial value to the bill because of their uniqueness and rarity. Value-added features include the following

Collectors value rarer silver certificates than common ones because they are not easy to find and are limited in availability. Generally, the value of a collectible rises with its rarity because people are no longer paying for only the item; they are also paying for its uniqueness.

A collectible with low demand will naturally have a lower value than one with high demand. The reason is that demand indicates the level at which collectors desire a collectible and are willing to pay for it.

However, demand can only do so much when the item is abundant. This is why common silver certificates sell for less than rarer ones, regardless of the demand for them among collectors. 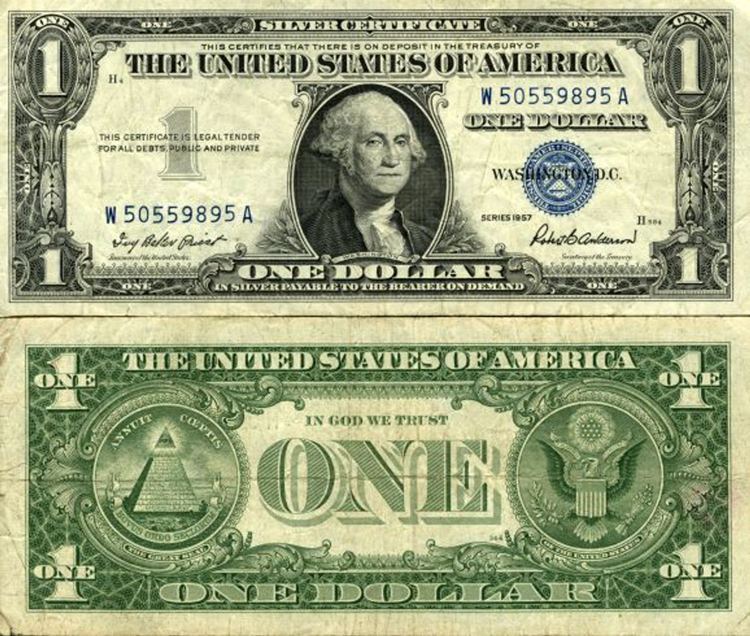 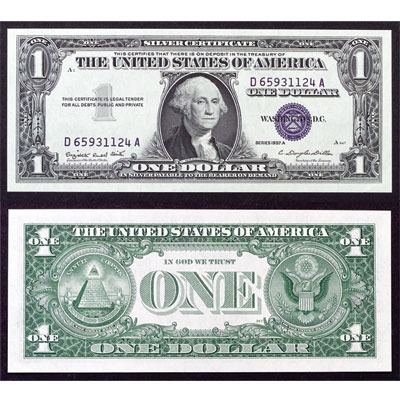 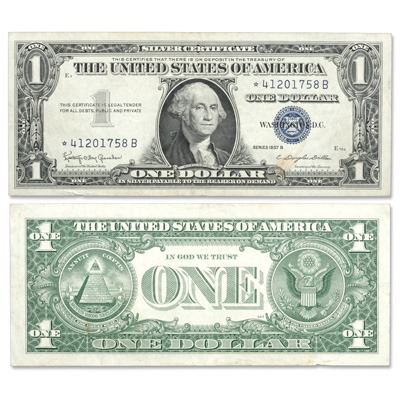 Selling your 1957 $1 dollar silver certificate in the right places will fetch you more than just its face value. We mentioned earlier that collectors value these notes, and you should ensure that you sell them through the appropriate avenue.

This way, you can get a good price because you are selling to people who value it more.

Local pawn shops are good for some quick cash, especially if you want to sell a low-value certificate. Some of them can also grade the note for free and are easily accessible if you have one in your neighborhood.

Another option is to use an online platform like Heritage Auctions or eBay. These platforms allow collectors to bid on different items of choice, opening up the possibility of getting more value for your silver certificate.

Don’t forget that it is always good to grade your certificate beforehand and indicate its condition when listing it for sale.

The 1957 silver certificate is a small-size one similar to federal notes. While its face value is $1, interested collectors can pay more for it. The reason is that the certificate’s worth isn’t tied to its monetary value but rather its historical value.

Ensure to get used to its features so you can recognize a counterfeit. Better still, performing a quick 1957 silver certificate serial number lookup on the internet will indicate if the bill is original or not.