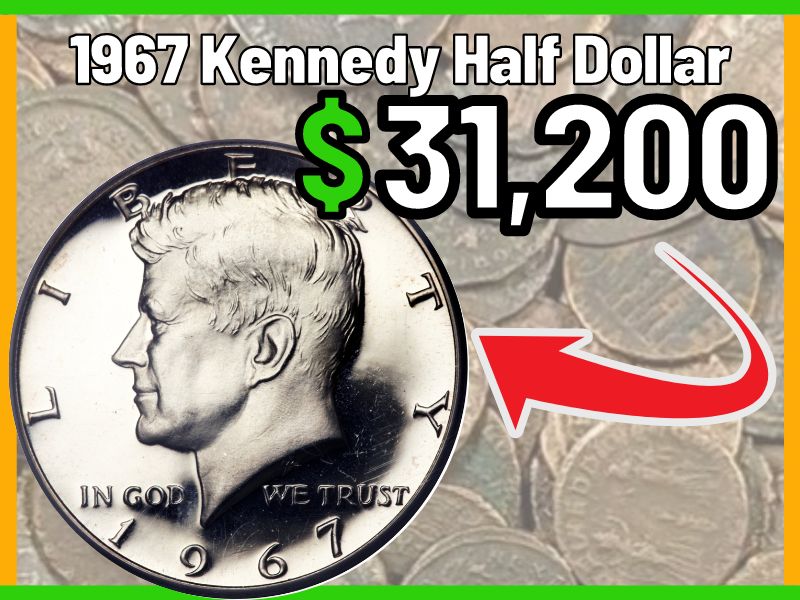 Kennedy half dollars with a silver component are generally worth their weight in silver because of their very high mintage, and the 1967 Kennedy half dollar is no different. The ones in circulated condition usually sell for around $5, while higher grades can fetch anywhere between $7 – $25.

The Kennedy Half Dollar

Production of this series started in 1964, with the coins having a composition of 90% silver and 10% copper. However, the US Mint later reduced the silver component from 90% to 40% for Kennedy half dollars struck between 1965 to 1970.

Subsequent mints after 1970 have a composition of 75% copper and 25% nickel, with no silver component.

Following the assassination of John F. Kennedy, the United Mint Director, Eva Adams, informed Gilroy Robert, the Chief Engraver, about the consideration of honoring the late President by depicting him on either the silver, half, or quarter dollar.

Adams later authorized the project for the half dollar on November 27, 1963. The decision came because Jacqueline Kennedy, the late president’s widow, didn’t want to replace George Washington on the quarter and, therefore, picked the half dollar.

Roberts had to improve on an existing bust of Kennedy used for the Kennedy medal because of the time constraint since the production would begin in January 1964. With Roberts working on the coin’s obverse, Frank Gasparro handled the reverse and modified the designs he created for the same medal.

Since the US Mint needs approval from Congress for any design change within 25 years of the previous one, Texas Representative Henry Gonzalez introduced the bill for the new design featuring Kennedy. Congress endorsed the call on December 10, and the bill passed on December 30, 1963, giving the mints full approval to strike the coins. 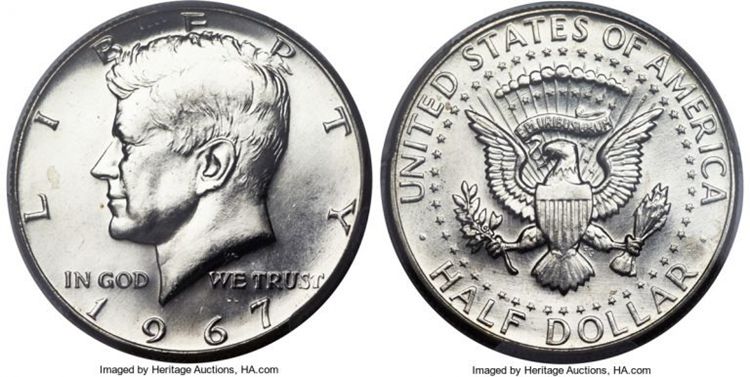 The coin is a part of the Kennedy series, and it circulated in 1967. Even though it carries similar designs as previous mints, its year of production and mintage are different.

Features of the 1967 Kennedy Half Dollar

With the intent to honor the late president and the country he died serving, this coin depicts Kennedy on its obverse and the US eagle on the reverse.

Knowing the coin’s features go a long way in avoiding counterfeits and even performing some measures of self-grading. 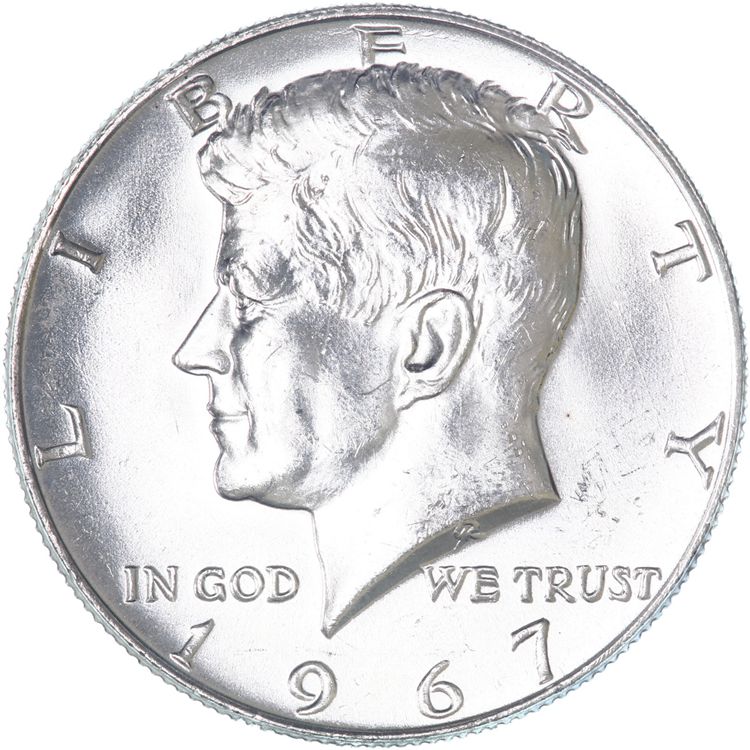 The coin’s obverse carries a left side profile of the late president with the word “LIBERTY” struck along its top. Underneath Kennedy’s profile, you will find the coin’s production year, which in this case is “1967.”

You will find the famous motto “IN GOD WE TRUST” and the coin’s production year below the late president’s profile. It is important to note that the profile’s neck splits the sentence into two halves across the coin. 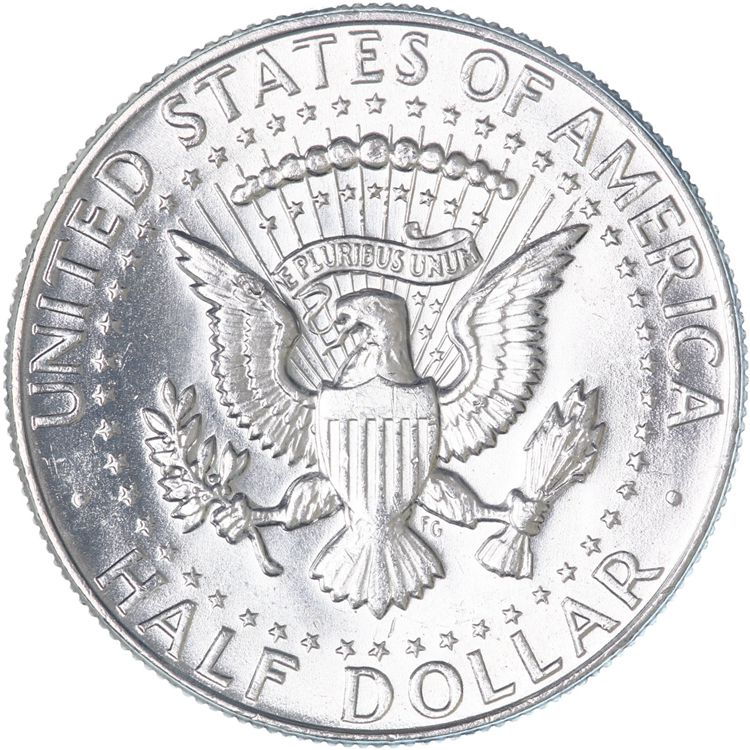 You will find the American bald eagle struck at the center of the coin with outstretched wings. The eagle has an olive branch in its left talon and arrows in its right talon. This depiction symbolizes the United States’ readiness for both Peace and War.

Above the eagle is a ribbon with the words “E PLURIBUS UNUM,” while stars surround the eagle. The “UNITED STATES OF AMERICA” lies struck along the top of the coin with its denomination “HALF DOLLAR” struck at its bottom.

Finally, the coin’s edges are reeded.

You might wonder why the 1967 Kennedy half dollar carries no mint mark, unlike other Kennedy coins. The reason is that the Philadelphia mint struck the 1967 half dollar, and the mint doesn’t use any mark.

Even though the coins carry no mint mark, they were struck in high numbers. The Philadelphia mint produced a total of about 295,046,978 1967 half dollars. However, such high mintage did not guarantee efficient circulation.

The Kennedy half dollar never circulated well. First, because of the massive hoarding during the early years of production. Also, most of the coins were melted down for their silver during those times.

However, although Kennedy half dollars are still in production, you will rarely find one in everyday circulation. The reason is that the coins are sold in mint sets and are intended only for collectors.

Just like other coins of high mintage, the 1967 half dollar has its share of errors and defects that can increase its value.

This error occurs when there is an issue with the coin’s outer coating during manufacture. It causes discolouration, peeling, and uneven surfaces.

As its name implies, coins with this error have ragged edges because the collar used during striking has become dull.

However, this error adds to the coin’s value as a 1967 silver half dollar with a ragged edge clip can sell for as much as $95.

This error is a result of striking a half dollar on a quarter or .25 cent planchet. Since the quarter planchet is smaller than a half dollar’s, the coin ends up with incomplete features, especially words.

A quarter planchet error increases a coin’s value significantly. A 1967 Kennedy half dollar with this error can sell for anything between $400 to $100+.

Clipped planchet errors occur because of a misfeed when feeding the metal strip through the blanking machine. This causes the punches to overlap the metal when striking, creating a clean break or clip.

This error has two types, namely Straight clip and Curved clip, with the former being rarer than the latter. The two types also increase a coin’s value significantly.

A planchet becomes defective if it’s damaged before or after punching it from the original metal sheet. If this damaged metal then makes it to the dies, it will end up as a defective planchet.

Therefore, coins with this error were struck on such planchets.  On the upside, it also increases a coin’s value by up to $100+.

Generally, strike-throughs happen when a foreign object, material, or substance comes in between the die and planchet during striking. The result is the foreign material getting imprinted on the coin.

A strike-through error usually occurs when only one Mint struck a series. The mint comes under unusual pressure to meet mintage demands and try to apply excess grease to lubricate the dies.

In the case of the 1967 silver half dollar, the foreign substance was grease, and it caused one or more defects to the coin.

This error also adds to the coin’s value.

A DDO/DDR error happens when the die strikes the planchet twice or more. The result is the coin having double letterings or extra edges because the features were struck multiple times.

The planchet used can sometimes be too thin, causing the coin to have lesser weight than regular ones.

How Rare is the 1967 Kennedy Half Dollar

The 1967 Kennedy half dollar is not rare to find because of its high mintage. However, the series in general never quite circulated, with most still sitting in bank vaults to date.

Sometimes, high mintage does not guarantee a coin’s abundance in circulation. There are several reasons for this, with hoarding being one of them. Other causes include demand and spending power.

Half dollars are no longer in circulation mainly because of inflation and the use of cashless means to make purchases. This is why Kennedy half dollars are now minted solely for collectors to obtain through mint sets.

Until the government decides to stop their production, the half dollars will remain in bank vaults. While this looks far-fetched, it might happen in the nearest future because of how fast we are moving towards a  cashless society.

On the other hand, 1967 silver half dollars with errors generally have significantly lesser numbers and, as such, will not be as common as regular ones. This also explains their higher value compared to error-free coins.

Although a 1967 Kennedy half dollar value does not fall below its weight in silver, it can fetch more prices, especially in top conditions. Speaking of which, a coin’s condition plays a huge role in its value.

There are a number of factors that influence the amount your 1967 silver half dollar will fetch.

A coin’s grade refers to its condition, and while it is broadly divided into two types (circulated and uncirculated), it is more intricate than that.

Circulated: Coins in circulated condition have been spent, and because of this, they have visible signs of wear and discolouration. The damage is mainly due to hand-to-hand exchanges.Grades that fall under this condition include

Uncirculated: Coins in this condition show extremely little to no signs of damage. The reason is that most have never exchanged hands and never been spent. Some in this condition remain the same as the moment they were struck.

This category also covers the ones minted for collectors i.e. Proof.

1967 silver half dollars in mint states (MS) can sell for up to $50, while those with PR grades can go for much more.

This factor not only influences a coin’s worth but also affects its demand among collectors. If your coin has a mintage above 10 million, it is generally not considered very rare. In the case of the 1967 Kennedy half dollar, a mintage of more than 295 million means it is quite common.

As a result, collectors can acquire it with relative ease and that makes its value low. However, 1967 Kennedy half dollars with errors are less common and therefore fetch more prices.

The more the demand for a coin, the more it’s worth. This applies to both demands among collectors and for circulation.

If a coin is rare, its demand would be high, which will increase its value too. However, if the coin is common, that means people can obtain it with ease, which will lower its value, hence the low value of 1967 half dollars.

Other factors include where you choose to sell your coin and how you present it too.

Note: All the 1967 half dollars were struck at the Philadelphia mint, hence the absence of a mint mark.

5 Most Valuable 1967 Kennedy Half Dollar Ever Sold 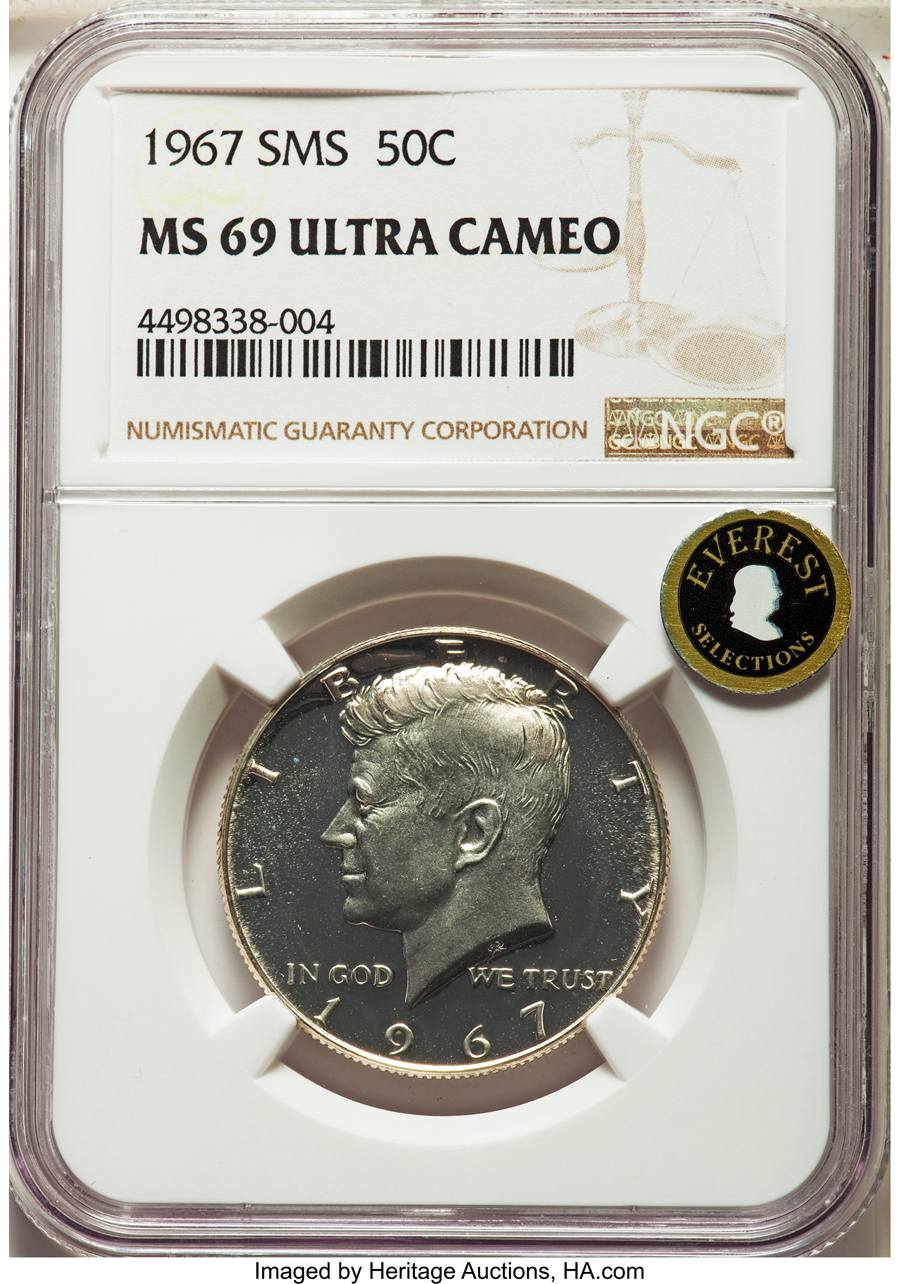 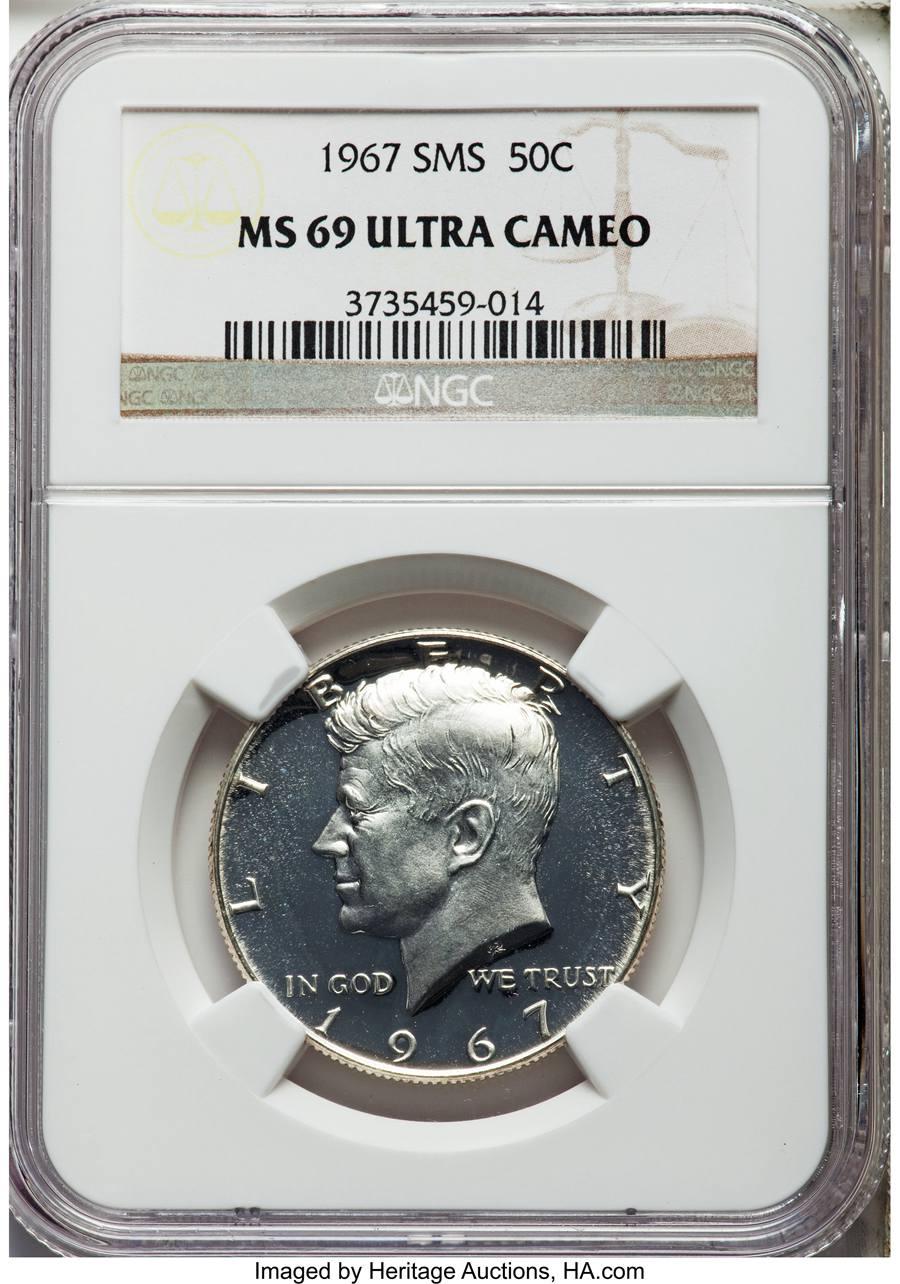 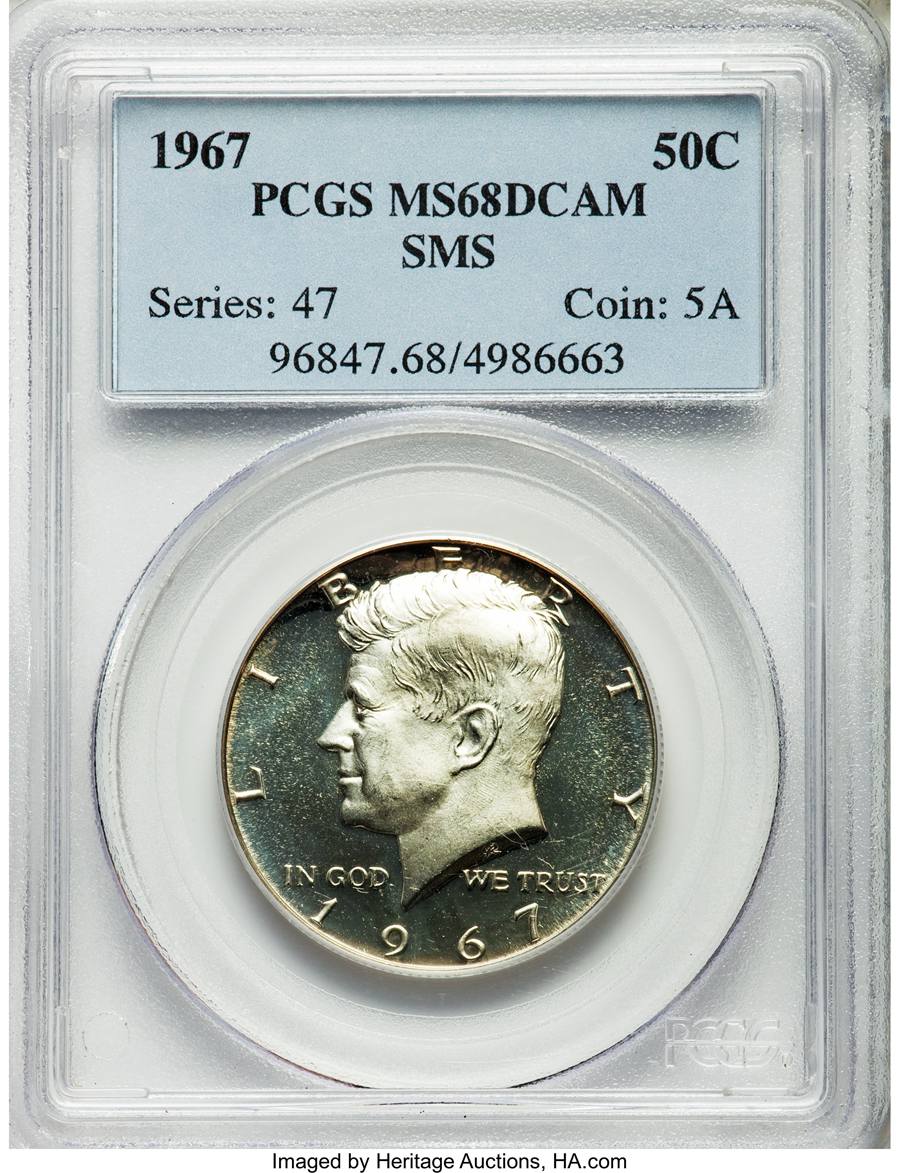 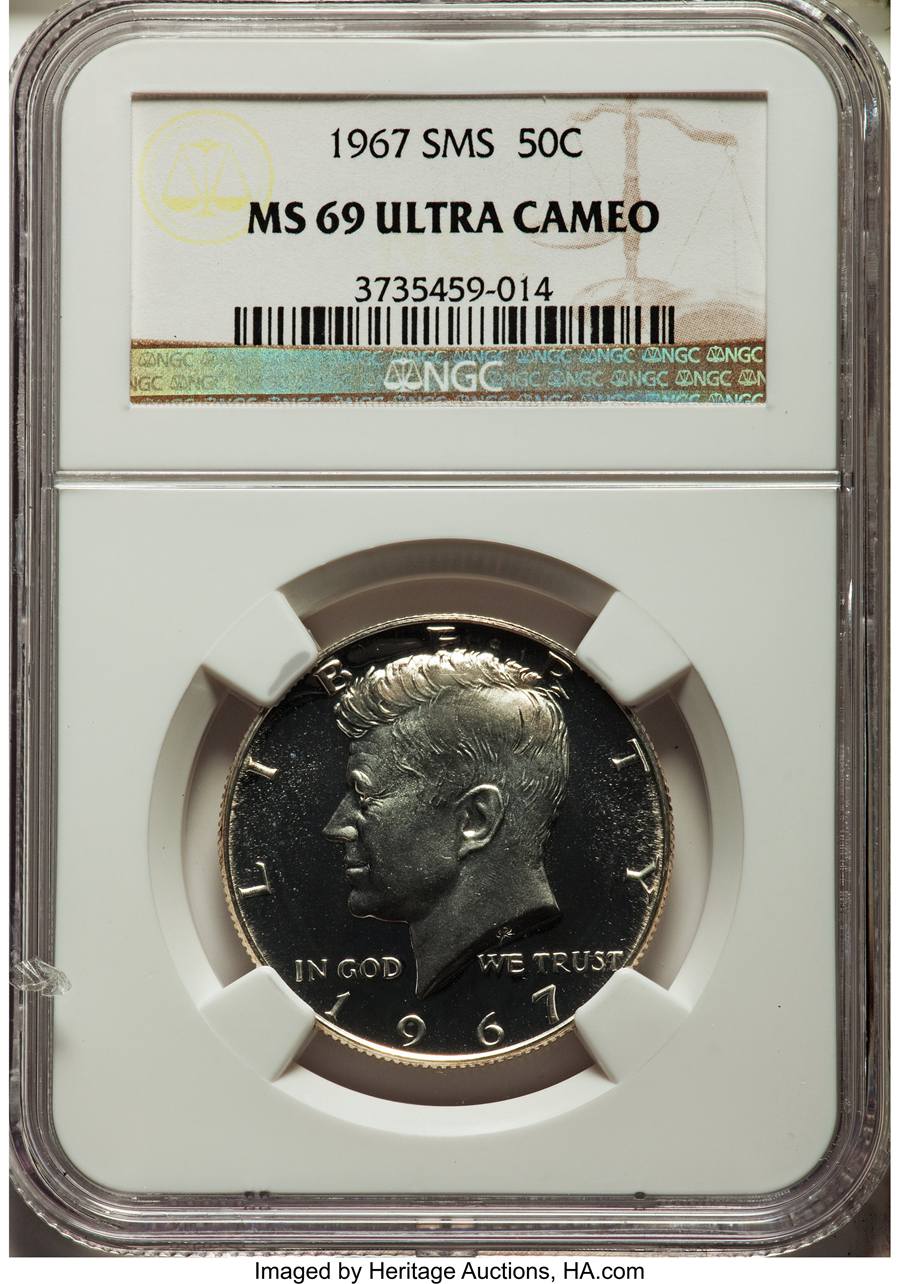 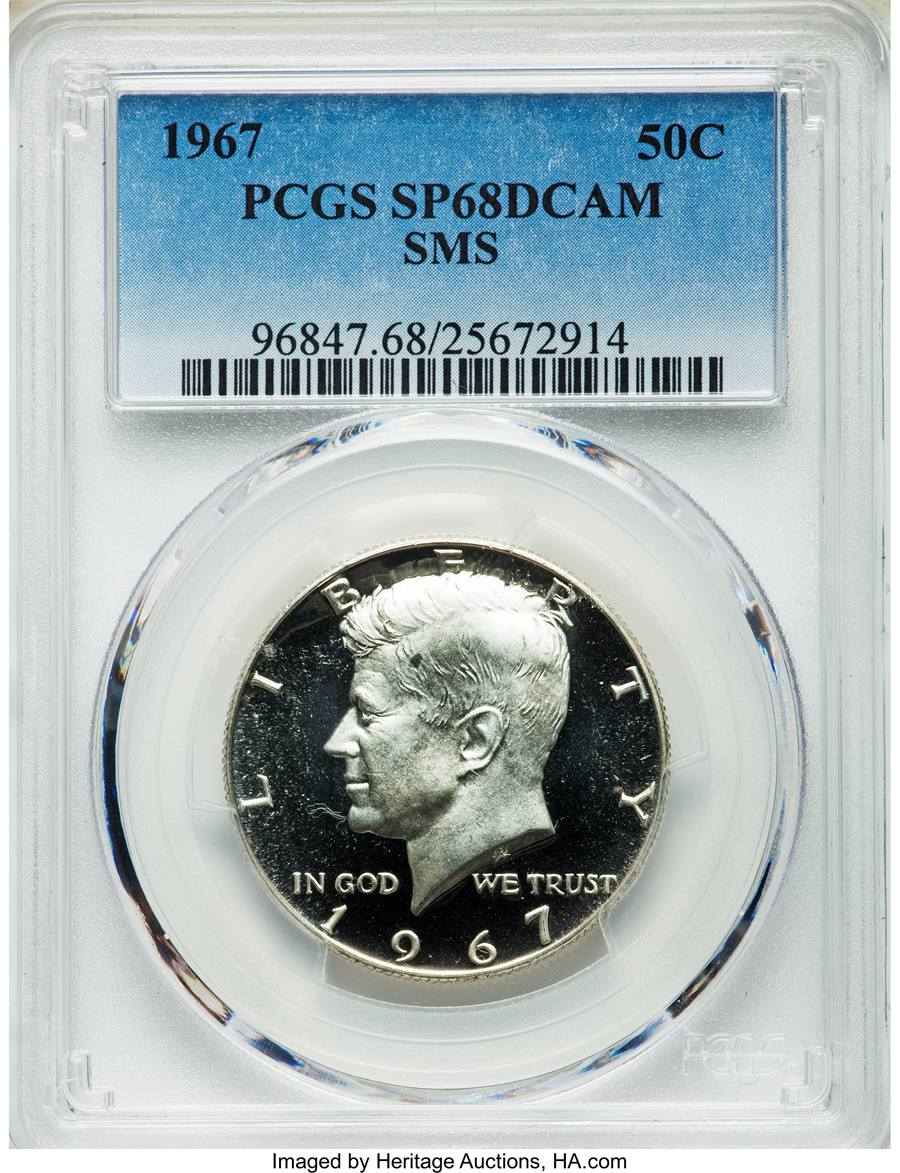 Best Places to Sell Your 1967 Kennedy Half Dollar

As we mentioned earlier, the place or outlet you choose to sell your 1967 silver half dollar can play a vital role in getting you more value. There are some options to pick from based on convenience and worth.

These places are more convenient for most people, and they can even grade your coin for free. You might want to use them for quick cash, especially for low-value coins like the 1967 half dollar.

However, you might get even less for your coin compared to other options.

Websites like eBay, Etsy, and Heritage Auctions allow people to put things for sale. They are especially useful for collectors mainly because they make bidding processes easy and comfortable. You will have to create an account and then follow the necessary steps for placing your coin on the market.

A good way to fetch more value for your coin is to grade it beforehand. You can have a coin dealer or appraiser take a look at it. Another great idea is to take clear pictures of your coin and put it in casings or transparent wrapping with good eye appeal.

Online platforms will generally yield more value for your coin because several people will bid on it.

Note: If you are wondering if there is a different option for buying, you can get one from the bank. However, it might come in a mint set like in the case of some other Kennedy half dollars.

Every coin collector will have to obtain the 1967 Kennedy half dollar because you cannot complete a Kennedy collection without it.

As a part of a series that honors a great and beloved president, this coin’s value is not in the amount it can fetch but rather in what it represents to American society.