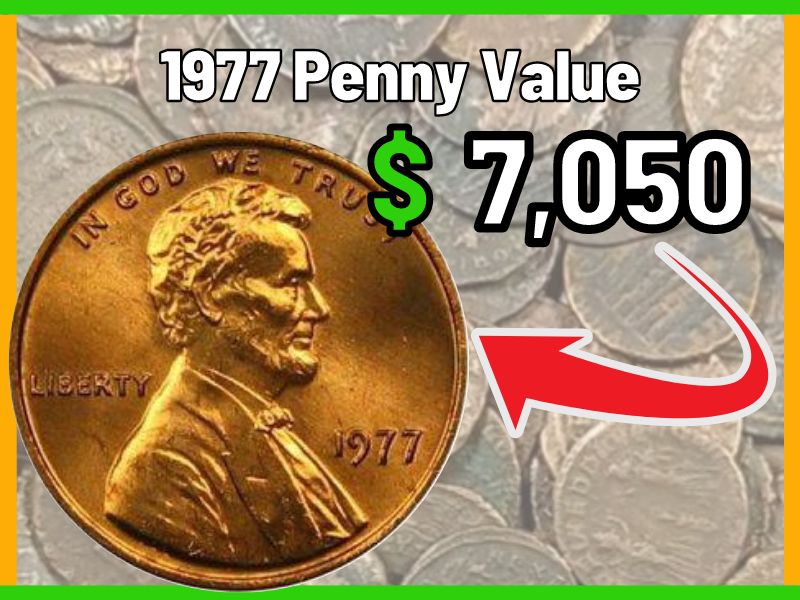 Do note that these coins can be worth much more. This article will break down the various coins with mint marks, the varieties of 1977 pennies, and what to do if you have this coin in your possession. 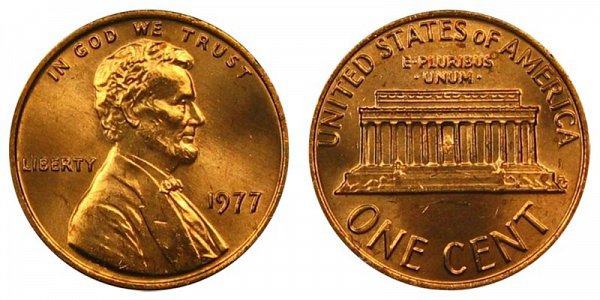 The 1977 penny which has Lincoln’s head on it is a one-cent coin that was produced in 1977, a very interesting year as this article will show you.  First, get acquainted with the value. The truth, contrary to what you may have heard, is that this penny is worth something more than face value.

The 1977 penny is a member of a family of pennies that has the head of Abraham Lincoln on it. Together, these coins are referred to as Lincoln pennies. The penny is a one-cent coin. The first one was struck in 1909 with an obverse designed by Victor David Brenner.

In 1959 the United States mint came up with what was called the Lincoln Memorial design which saw a change in the design of the reverse. President Eisenhower’s administration contracted Frank Gasparro to create what turned out to be the new reverse design, the Lincoln Memorial.

This design replaced the original design which depicted the stalk of wheat. Even though many in the circle of the US mint offices thought the design was a terrible one, “an artistic disaster” according to some, the design was accepted.

We have the opportunity of coins with mint marks now because in 1968 the mint marks which had been previously stopped were restored. The penny nickname was the result of coins struck in England. They went to decimals in the US in 1971.

Lincoln pennies changed in composition and design a few times. They were originally struck in 95% copper but changed for one year in 1943 when it was made with steel and a core of zinc because copper was needed for war efforts in the second world war. The mint reverted to 95% copper again until around 1982 when copper became too expensive so they changed to a core of zinc and a copper layer.

Copper prices rose in the 1970s when the face value of the coin reached a cent. People started hoarding the cents hoping to make profits from later sales. To continue to produce coins the mints decided on aluminum cents. In 1973 over a million of those were minted. The mints told congress that the aluminum coins jammed their equipment and a stop was put to the production of aluminum coins. It became difficult to retrieve distributed aluminum coins. 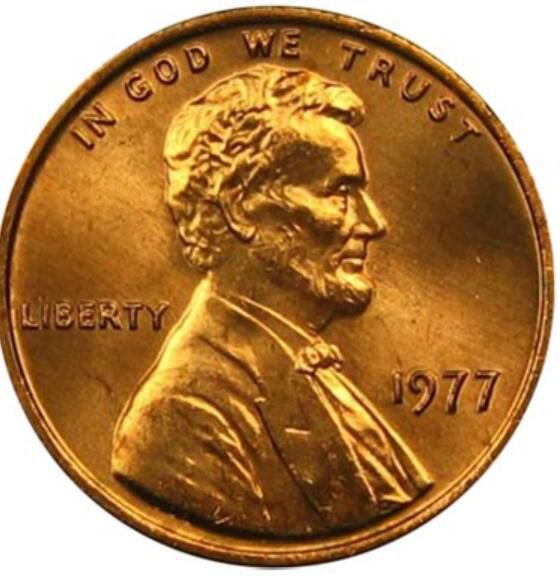 The obverse of the 1977 cent was designed by Victor David Brenner. It features the side view of Abraham Lincoln. He is seen facing left. One of the significant things about this design of Lincoln is that it features his figure from his head to his chest. The words on the obverse are:

IN GOD WE TRUST, the motto of the United States of America. Behind Lincoln is the word LIBERTY, and in front of him is the word 1977. In the example above you can see the fine details in the hair and face. 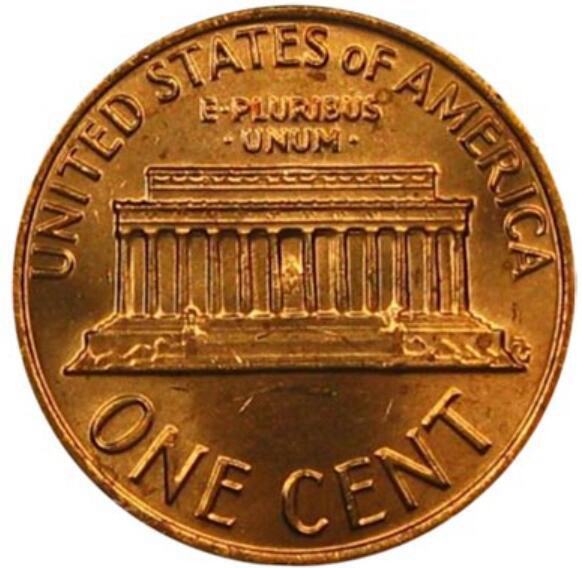 The reverse of the coin features a design made by Frank Gasparro. This design was ordered by the Eisenhower administration. Frank Gasparro never saw the building itself in real life. He drew this design from his own imagination. Many people thought it was a dreadful design. Oddly, the administration that authorized the design accepted it.

The reverse here shows the Lincoln Memorial building with its columns and the figure of Abraham Lincoln standing between the sixth and seventh columns. The words on the coin’s surface are UNITED STATES OF AMERICA, E PLURIBUS UNUM, and ONE CENT.

This one-cent coin was produced in the three US mints:

The D is located under the date 1977 in the coin that was made in Denver. The size of the D is big enough not to miss it. So if you have the D coin you have a penny that’s likely more valuable than its face value. The S coin is a proof coin, that is, it was produced for the benefit of collectors to have them. You would not have any mint mark indicating that a 1977 coin was made in Philadelphia.

When it comes to the value of the 1977 penny different coin experts have done the work of grading and valuing them. Sometimes you’d notice a slight variation in the prices of the same coin. The reason for this is that pennies do not wear uniformly. Experts pick a coin, grade it and assign an estimated value to it. Consider some of the values from experts.

Cointrackers value the 1977 penny without a mint mark to be worth from $0.1 to $8 depending on the condition of the coin and how far up it is on the grade scale. In Average Circulated (AC) it is worth $0.1 in the certified mint state. At auction, this same coin can rake in $8.

Usacoinbook estimates the melt value of the 1977 penny at $0.0218. and in brilliant uncirculated condition, it is estimated to be worth $0.33 when graded MS 65. To show that the 1977 penny can sell more than estimated above if the condition of the coin is over the top and graded accordingly, below are the most valuable ones:

If you have any of the coins mentioned above and you are new to coin collection, your interest should be piqued. Curiosity should move you to consider having your coin graded.

You can do it yourself. Get yourself a coin magnifier that allows you to examine the details on your coin. You can at least have an idea of how much your penny can make at an auction before an expert takes a gander at them.

When checking your coin, you are looking for the following:

You need a magnifier of more than 20X power to magnify the surface of a coin. One of the reasons you need such is to be able to tell if your penny falls among the different varieties of coins.

When a coin exhibits irregular attributes its price and value increase greatly. There are regular strike coins and there are those called varieties or error coins. Below are a few of the known 1977 error coins. 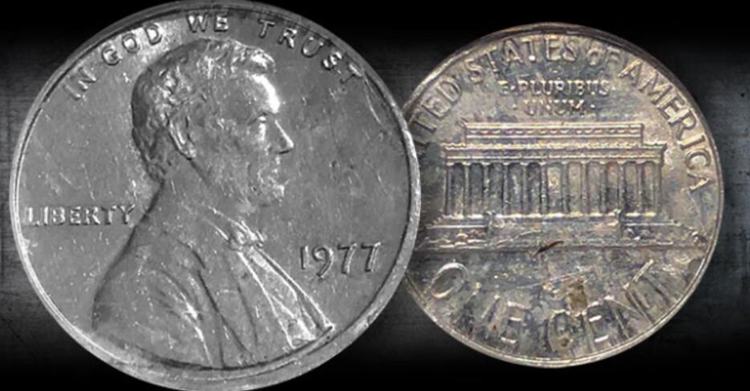 The above coin is an aluminum 1977 penny that was discovered and graded by NGC. It was struck at the time the mints were short of copper and they had to explore other materials for production.

The penny is unique, and some have said it was likely struck intentionally with errors. It weighs 1.04 grams. Since there were no coins struck with aluminum for public circulation, the aluminum pennies struck in 1973 during the copper scarcity were distributed to congress members and were all recalled shortly after to be destroyed.

If you ever find this aluminum coin, you should have it graded. Who knows, you just might make a fortune off it. 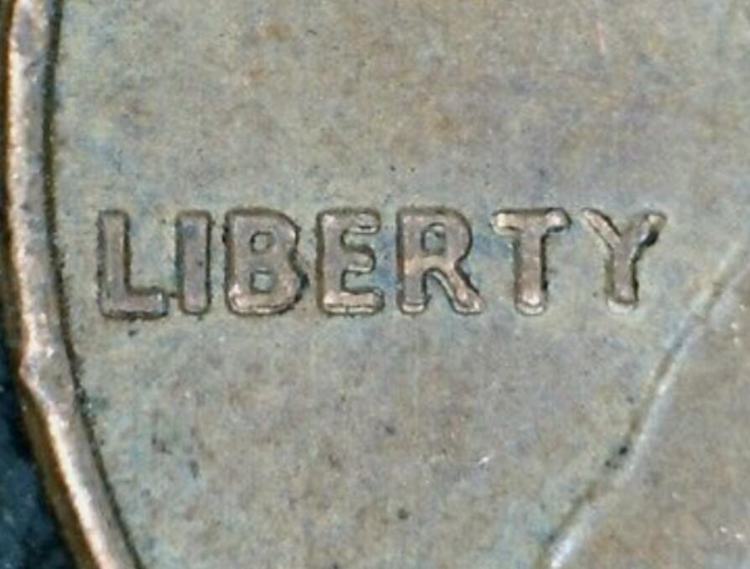 These are incorrectly produced coins with the doubling in either the image or the letterings on the obverse and reverse. There are only minor examples of the 1977 penny double die in existence. You do not need a magnifier to see some while others are obscure until you catch them with a magnifier. 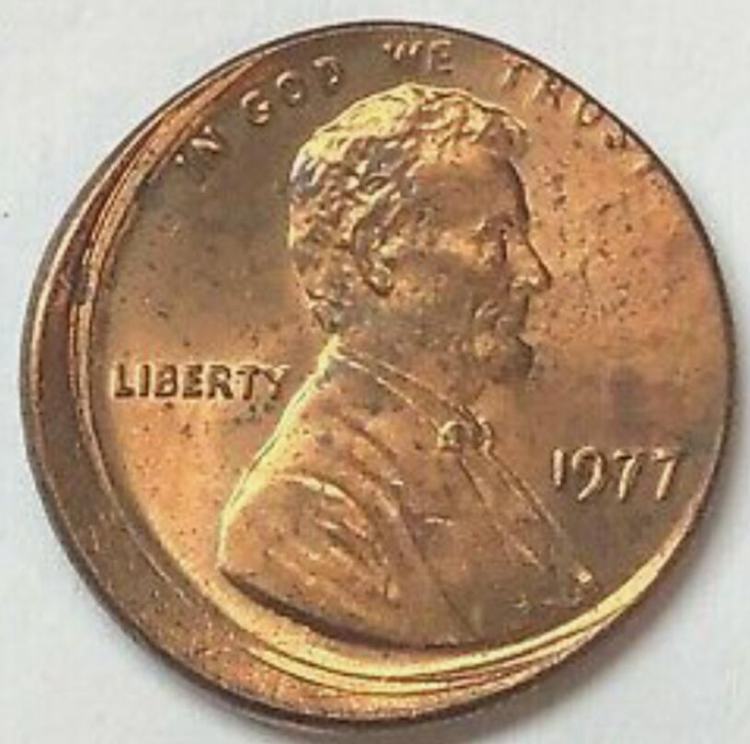 This error is created when the coin is not properly centered under the die. They are usually strange looking and not hard to spot, neither do you need a magnifier to find this error on your penny. Below you can see a sterling example of a regular strike 1977 coin showing the strange off-center appearance.

This one is up for sale on eBay for $46.50. Note though that not all off-center coins are valuable. It has to be of more than 3% to be considered really valuable since anything less is already a common phenomenon.

Human error commonly affects the way a con is punched. Back in the 1970s mint marks were hand punched into dies. The person doing the work may miss the mark the first time and have to repunch, or he may punch it upside down. The penny is valued at $6.

The 1977 penny is hardly a rare penny since more than 4 million coins were produced and circulated. Only a few are rare because they have attributes that make them valuable. For example, the 1977 penny with repunched mintmarks is rare, double die coins are also rare.

It is the condition of the coin that makes it worth so much. If the D penny is a double die, then it certainly may be worth more than face value. To determine how valuable the penny is, you have to have it graded. The fact that it’s been more than 43 years since this penny was produced doesn’t make it necessarily valuable. It has to be significantly different from its peers.

There is not only one error on the 1977 penny. The foremost error on the penny is the aluminum pennies that were made in the Philadelphia mint to test what it would look like to have an aluminum coin. They were made and distributed to members of congress.

But workers from the vending machines complained about the coin and production of it was discontinued. The coins were presumably created using an aluminum planchet from 1974 to 75.

Other errors for this penny include double die, repunched mintmark, and off-center pennies.

Yes, they are worth something in different conditions. Both 1977 with no mint mark and the D penny are $1 in uncirculated condition and graded MS 65. The S-proof coin graded PR 65 is worth $2.50.

The D penny is worth $1. It can be worth more depending on the grade. Some D pennies have sold for premiums.

Are pennies with no mint mark valuable?

Yes, pennies with no mint marks can sometimes be valuable. There are several known pennies like the 1922 No-D Lincoln penny, the 1968 No-S Roosevelt proof dime, and the 1971 No-S Jefferson proof nickel. All these coins are worth thousands of dollars.

In average condition the 1977 D penny is worth $0.1 and one in mint state can be valued at $8.00, according to cointrackers.

What Penny years have errors?

Almost all pennies have error coins, however, these are some of the most valuable pennies with errors:

The 1978 penny has a large break in the die. It is a 40% break on the obverse which results in most of Lincoln’s body missing—neck and shoulders and parts of his chest.

Another one was double struck, 65% off center.

How much is a gold-colored penny worth?

There’s only 0.583oz of gold in the gold penny. That is just $5 according to the present price of gold.

Pennies like the 1977 Lincoln cent makes the art of collecting interesting. If you are new to the field and looking to make a foray into collectibles, make sure to read this article more carefully.

It saves you time and effort to understand, especially how coins are graded. The 1977 penny is one of the less complex coins you can begin with. Its varieties are well established and do not come with too many complexities in their identification.

It is also one of the few pennies whose minting does not present researchers with difficulty. There are just three main sets of coins: the one without a mint mark, the D penny, and the S penny.