The National Park of American Samoa coin has become highly desirable. It is one of the last releases in the line of America the Beautiful Quarters. The 2020 American Samoa quarter has made headlines all over the United States. It has intrigued entry-level collectors, animal lovers, and life-long coin enthusiasts.

It’s a beautiful quarter, but finding one may be tricky. Read this guide below if you want to attain one of these rare 2020 national park circulating coins.

What is American Samoa?

American Samoa is a collection of six volcanic islands off the coast of Hawaii in the Pacific Ocean. Originally used as a U.S. naval base in the late 1800s and again during World War II to facilitate communications among American allies, American Samoa has been an integral part of the United States military. Though the United States still has jurisdiction, the territory drafted its own Constitution in the 1960s.

What is depicted on the 2020 Bat Quarter Coin? 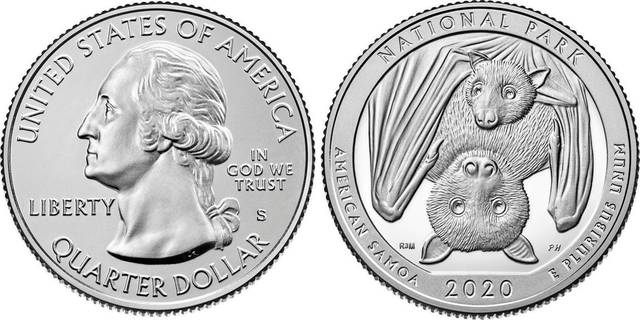 Like all quarters, George Washington appears on the obverse side of the 2020 bat quarters. To his left, the quarter says “Liberty.” To his right are the words “In God We Trust.”

This beautiful quarter also features a mint mark on the reverse side just to the right of the bat. This letter corresponds with the United States mint facility that printed the quarter. Typically, the mint mark letters on a 2020 national park quarter will be one of the following:

Why was the Samoan Fruit Bat Mother Chosen for the 2020 Quarter-Dollar Coin?

The Samoan fruit bat originates in American Samoa and is endangered due to habitat degradation in the area.

The American Samoa National Park is the area’s only park, but it spans 8000 miles across three islands. This park of American Samoa is one of the most awe-inspiring in the United States national park system. It preserves wetlands, forests, and native fruit bats. It also protects reef species from habitat loss.

According to the United States Fish and Wildlife Service, the Samoan fruit bat was moved to species threatened status in the 1980s. Since then, deforestation, commercial hunting, and natural disasters have affected even more of the bats’ habitats.

The endangered status of this species puts the entire ecological preserve in the National Park of American Samoa at risk. The bats play a vital role in plant pollination on the islands.

Are there any other 2020 National Park Quarters?

The American Samoa quarter is one of 56 in the United States Mint America the Beautiful Quarters program. Since the U.S. Mint started printing commemorative bat quarters, the coins have soared in popularity for collectors across the country. The historical sites these quarters represent are crucial to ecosystems across the country.

The U.S. mint released four other national historical park designs along with the American Samoa coins in 2020. Other 2020 national park quarters include:

Is a Bat Quarter Rare?

For coin collectors wondering if they have a shot at scoring a national park coin, you are in luck. If coin collectors look specifically for a National Park of American Samoa quarter, they may not be so lucky.

If you want a rare silver-proof version, get ready to spend even more money to snag one.

Fortunately, there are multiple versions of the bat coinage. Each version consists of different materials. Some versions are worth more to coin dealers. The market for National Park of American Samoa coins is hot, with enthusiasts worldwide hoping to find one.

There are millions of American Samoa quarters in circulation. The mint in Denver printed the most at more than 200 million bat coins. The West Point mint, where silver reserves are stored, printed less than Denver at about two million pieces.

The mint in San Francisco printed the least amount and rarest versions. There are around 570,000 2020-S San Francisco bat coins and less than 430,000 of the rare 2020-S silver-proof quarters from San Francisco.

Coincidentally, the bat quarter was released during the coronavirus pandemic. Rumors suggested that the quarter was explicitly made to hint at the connection between coronavirus transmission and the bat species.

This rumor was quickly debunked, but the headlines made the quarter more popular than the other America the Beautiful releases in 2020, including the highly-detailed Weir Farm quarter and the Salt River Bay quarter.

How Much is a 2020 American Samoa Quarter Worth Today?

Like most collector’s items, The 2020 bat quarter value of an American Samoa National Park coin heavily depends on the coin’s condition and amount in circulation. There are quite a few factors to consider that affect its worth and some major focal areas to note.

If you were to contact a coin dealer, the price varies. At the low end is the circulated condition clad quarter version. At the high end is the most expensive version of the American Samoa coin, the West Point mint quarter.

The 2020 National park of American Samoa standard circulation versions sell for face value at $0.25. These are the easiest to find.

What are Clad Quarters?

Clad quarters contain multiple layers of metal. Most clad money in circulation consists of a mix of copper and nickel. These are the majority of the National Park of American Samoa coins and sell for the normal value of $0.25.

To fetch the highest value for one of these coins, you’ll have to find one in uncirculated condition. These sell for higher than $0.25. The value rises depending on the mint location and the material used. Uncirculated condition 2020 commemorative bat coinage can range from

The West point versions fetch top dollar for many reasons. Some 2020-W bat quarter versions are printed with a V75 privy mark on George Washington’s left side to commemorate the end of World War II, a turning point for the American Samoan islands. Professionally graded 2020-W versions in mint condition with a privy mark have sold for more than $1000,00.

The National Park of American Samoa quarters in mint condition will be closer to the high-end price range. Those in uncirculated condition will be in remarkable care with only the smallest of imperfections seen under a magnifying glass. Mid-range priced quarters will have some blemishes and light contact marks. Lower price-range coinage will have the most contact marks and may be losing their shine.

A 2020 America the Beautiful Silver-proof quarter is not clad. These are made with real silver and are therefore worth their exact weight in silver. The prices for silver-proof national park currency will vary as the price of silver varies, but they generally range from $12.00-$24.00.

What is Silver Melt Value?

The melt value of silver-proof national park commemorative currency refers to the weight and value of the silver once melted. The melt value changes based on the composition of silver in the currency, so it varies from version to version.

Will the 2020 Bat Quarter value grow over time?

If you have your hands on a 2020 National Park of American Samoa quarter, hold onto it. The silver-proof versions are the most scarce and well taken care of. These will continue to hold the highest value.

For other versions, most coinage will only lose value as they continue to circulate and blemish. The less circulated the currency, the higher the value.

It is important to remember that the world of collecting ebbs and flows and the secondary market for coinage is unpredictable.

Is the 2020 National Park American Samoan bat quarter worth the investment?

Since the America the Beautiful commemorative coin program has concluded, it’s a wise investment to hold onto these coins if you find one for a great price. Collecting and holding onto the complete set of 2020 coins is even better. The set can bring an even bigger price if sold together and in good condition.

Though the untrained eye passes these off as loose change, a savvy collector would not. If you find a coin in circulation, don’t let it go easily. Chances are you won’t find another any time soon.