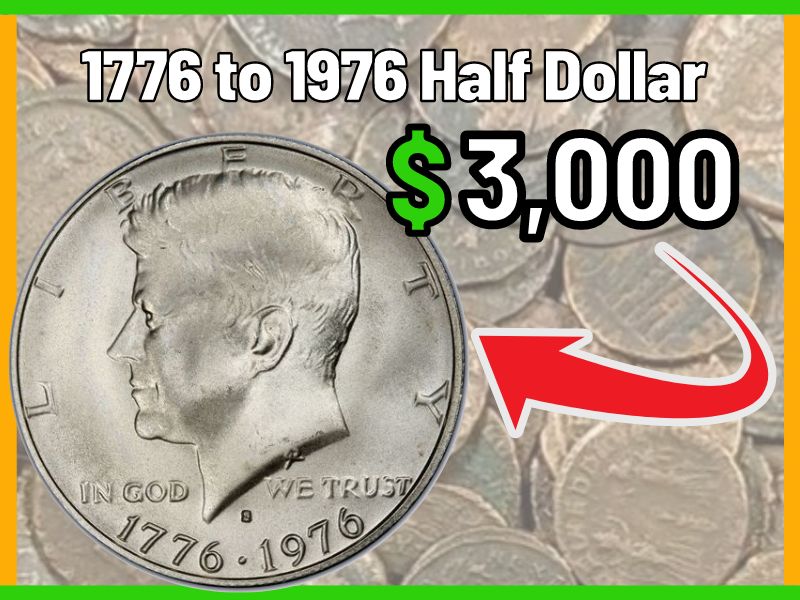 A 1776 to 1976 half dollar can sell for as low as $0.50 in circulated condition, $2.6 in uncirculated condition, and $4 for proof coins. The reason is that the coin is by no means rare, hence its low value. However, it represents an important element of American history and, therefore, has a unique place in every coin collection.

This coin has a composition of copper and nickel for its circulated series and about 40% silver for both the uncirculated and proof series. As expected, its composition also determines if the coin will sell for more or less. 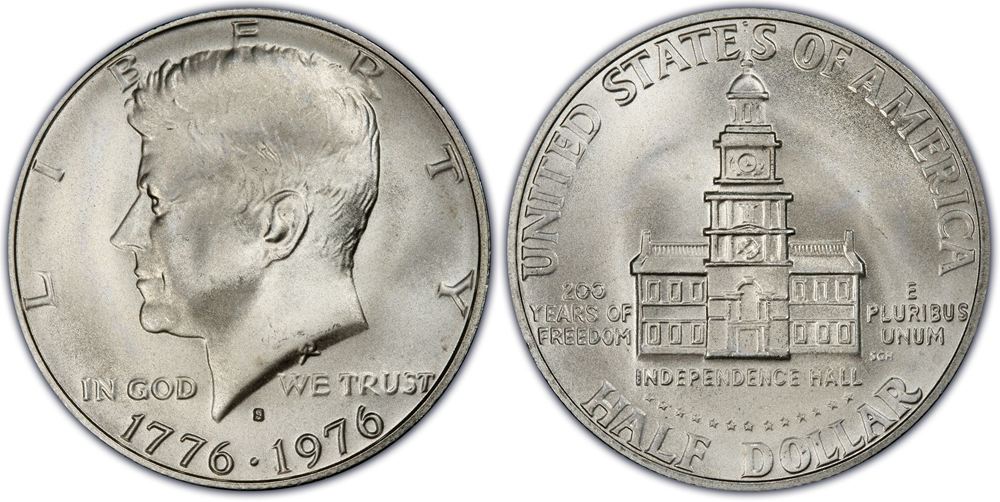 The 1776 to 1976 half dollar belongs to the category of Memorial coins. It was minted to celebrate the 1976 United States Bicentennial alongside the then quarter and dollar. The US Mint struck this half dollar from 1975 to 1976 but engraved ‘1776 to 1976’ on it to mark the commemoration of 200 years.

The coin was struck in different mints for two uses; the first being circulation and commerce, and the second for coin collectors. Since the Denver and Philadelphia Mints struck the coin for exchange, the San Francisco Mint handled the series meant for collection.

Components of the circulated coins contained no silver with a copper core and nickel cladding. The uncirculated series, however, had a 40% silver component.

Due to its initial purpose, most collectors call it the 1776 to 1976 Bicentennial Half Dollar.

The coin’s obverse (head) is significantly similar to other Kennedy Half Dollars in that it also carries the late President’s left side profile. On the other hand, its reverse (tails) has a unique design that emphasises the purpose of celebration.

After a competition that was opened to American sculptors, the US Mint selected Seth G. Huntington’s design for the coin’s reverse. The reason was that it was emblematic of the Bicentennial era.

Knowing crucial features on a coin is important as that is the first step to recognizing a fake. 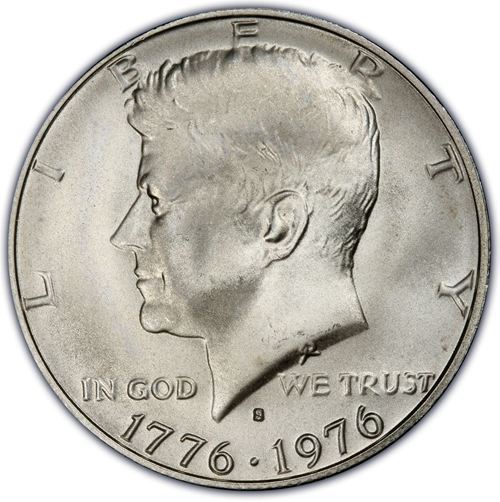 On the obverse side, you will see late President John F. Kennedy’s left side profile at the centre with the word “LIBERTY” struck along the coin’s top. The coin’s bottom usually carries its year of production, but this time, it carries the double date 1776 – 1976.

Across the lower part of the coin and truncated by Kennedy’s neck, you will see the sentence “IN GOD WE TRUST.” 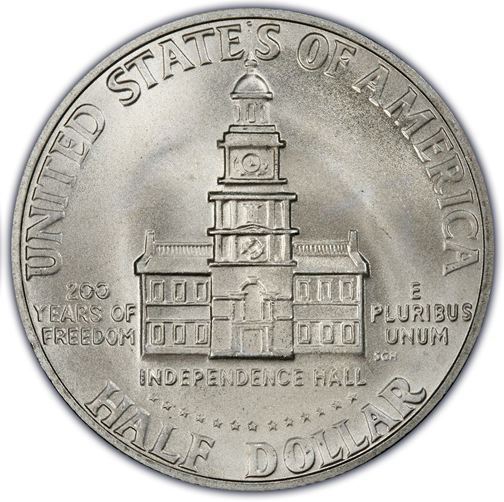 The 1776 to 1976 half-dollar reverse has a front view profile of the Independence Hall at its centre. To the left of the Hall, you will find the sentence “200 YEARS OF FREEDOM”, while the right side has the famous motto “E PLURIBUS UNUM”, meaning “One From Many.”

Along the top of the Independence Hall profile, you will find the “UNITED STATES OF AMERICA” struck onto the coin. The bottom carries the coin’s denomination, “HALF DOLLAR” this time.

Finally, there are 13 stars between the denomination and the Independence Hall profile. The stars represent the original states.

Note: The coin’s mint mark is struck on its obverse, underneath Kennedy’s neck and above the double dates.

As we mentioned earlier, three mints produced the 1776 to 1976 half dollar. Two struck the ones meant for circulation while one struck the series for coin collectors. Of the three Mints, the Denver Mint had the highest mintage, while the San Francisco Mint had the lowest.

Both the Philadelphia and Denver Mints struck the 1976 half dollars meant for circulation.

1976 Half Dollar With No Mint Mark 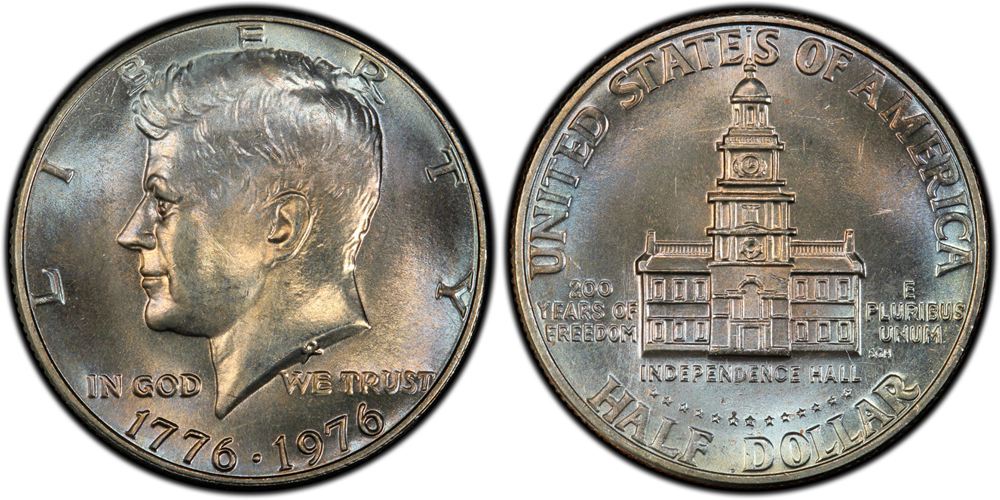 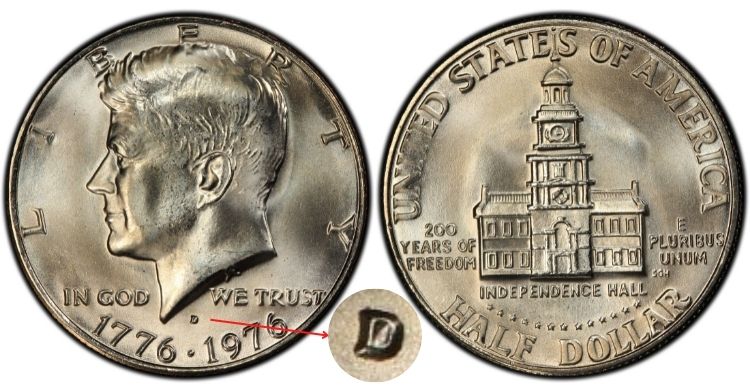 The Denver Mint had the highest mintage with a total of 287,565,248. 1976 half dollars struck at the Denver Mint carry the “D” mint mark on their obverse. This way, it is easy to recognise the coin variety during buying or selling.

Also, the 1976 D half dollar is common due to its high mintage, in addition to not having a silver component.

The San Francisco Mint struck all the 1976 half dollars intended for collection, including proof sets and uncirculated coins. 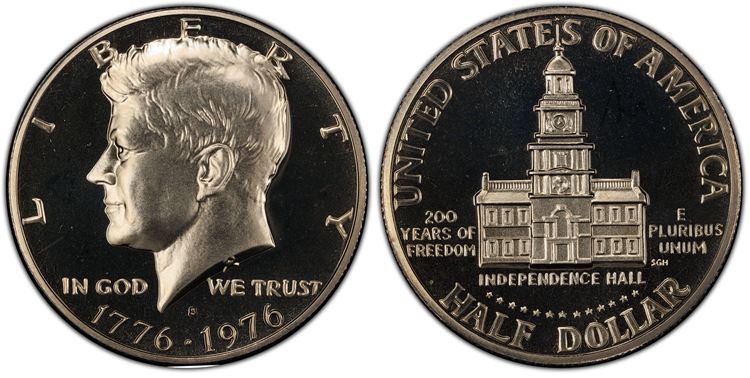 While the San Francisco Mint struck a variety with no silver component, the coins were proof, intended only for collectors. With a total mintage of 7,059,099, this variety is significantly less common than the circulated series.

The proof coins also carry the “S” mint mark that shows it was struck at the San Francisco Mint. 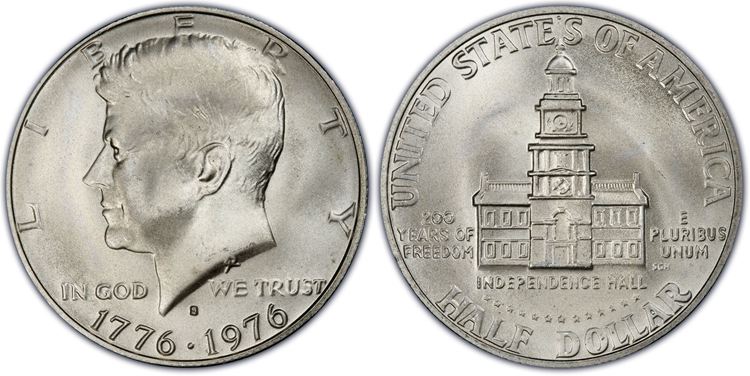 This variety has a composition of 60% copper and 40% silver, already bumping up its value. The San Francisco Mint struck a total of 11,000,000 1976 S silver half dollars between 1975 and 1976. Naturally, this variety should cost more than the others without silver components.

You will also see the “S” mint mark on coins of this variety. 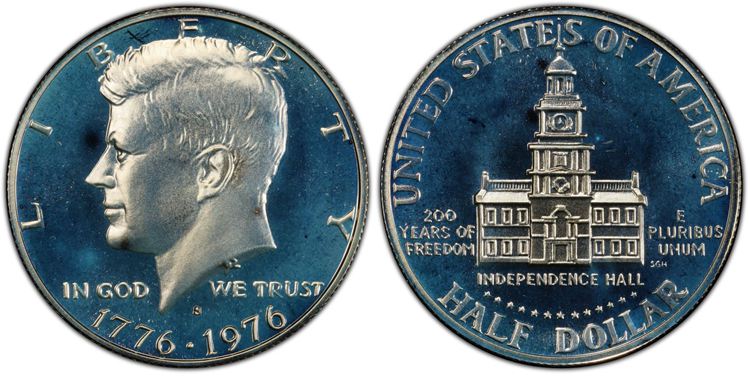 The 1976 S proof silver half dollar had the lowest mintage, effectively making it the least common and potentially most expensive of the varieties. Total mintage was about 4,000,000, with each coin carrying the San Francisco “S” mint mark.

With the high mintage of 1776 to 1976 bicentennial half dollars came a significant percentage of errors. These happened for several reasons and have surprisingly increased the coin’s worth due to high demand among collectors.

This error causes certain features on the coin’s obverse to either double or be thick than usual. Common features for a DDO error include the coin’s production year and “WE TRUST.” Unfortunately, a DDO error only adds a little bit extra to the coin’s value.

A DDR error occurs on the coin’s reverse, unlike a DDO error. You can easily spot this error on features like the US Mint motto “E PLURIBUS UNUM” and Seth Huntington’s initials “SGH.” While this error will increase a coin’s value, don’t expect a huge increase.

Other common errors include but are not limited to

Coin collectors generally agree that a coin needs to have a mintage lower than 10 million to be considered rare. With regards to that, none of the copper-nickel varieties is rare. This shows, on the one hand, that the coins circulated well but now have low values among collectors on the other hand.

Interestingly, the silver-clad coins had a mintage of 11 million, putting them in the common section. However, these coins cannot be common as the others, with a mintage as high as 200+ million. Furthermore, the silver component also adds to the coin’s value based on the current silver price.

The 1776 to 1976 S silver proof half dollar had a mintage of just 4 million. This makes them the rarest of the varieties outside of error coins. Naturally, these coins will have the highest value of the 1976 Kennedy half dollar series.

Most times, several factors come together to determine a coin’s value. From the coin’s grade to the level of demand and its rarity, knowing these factors can help you pinpoint your 1776 to 1976 bicentennial half dollar value.

A coin’s grade refers to its condition at the time of sale, which can make a huge difference in the coin’s price. While the grading system provides up to nine different grades, the following are the four main grades a coin can have.

A coin in good condition shows heavy wear, damage, and even scratches. You can easily observe the damage and discolouration with the naked eye. Intricate details have worn off due to serious exposure during exchanges.

Coins with this grade show lesser wear and discolouration. However, intricate details like Kenedy’s hair are only slightly more preserved than those in good condition. Most 1776 to 1976 half dollars in circulation fall under this grade.

For a coin to fall in this category, its intricate features are more visible to the naked eye. Discolouration, wear, and scratches are almost non-existent too. Most collectors regard this category as the best grade a circulated coin can have.

Generally known as Mint State (MS), this grade means the coin has never been circulated or exchanged. As such, it retains all of its details and features from production. Examining the coin under a single light source reveals an even colouration from rim to rim.

The higher a coin’s rarity, the higher its uniqueness, increasing its value. A coin can be rare for two reasons; low mintage or high demand among collectors. Either way, its limited availability adds more value to it.

The table shows the prices at which this variety sold under different grades and attributes.

You generally want to buy or sell your 1976 half dollar in a way that yields the most value. While this is very crucial for expensive and high-value coins, a convenient method might be the better choice for low-value coins.

Since the 1776 to 1976 bicentennial half dollar value is low, most people opt for selling it to a local coin dealer or pawn shop. This way, they can make a sale for some quick change and even get the coin graded for free.

However, online platforms are always better, especially for high-value coins. These platforms allow you to enlist your 1976 Kennedy half dollar and sell it to the highest bidder. Although the extra amount gotten from the sale might be negligible, it can be staggering for coins with significantly higher value.

Examples of relevant websites include Heritage Auctions, Etsy, and eBay.

Super Rare 1976 Half Dollars Worth Money

Even though the 1776 to 1976 Kennedy half dollar value is not a lot, its worth lie in its significance. Each coin from the series represents the commemoration of 200 years of freedom as written on the reverse side.

As a collector, you will inevitably need them to complete your collection. The best way to make this easy is to start with the 1776 to 1976 S silver proof half dollar since it is the least common. Acquiring the coin makes assembling the rest of the collection easy.

Finally, ensure that you properly grade your coin and remain conversant with the features to avoid falling for counterfeit coins.