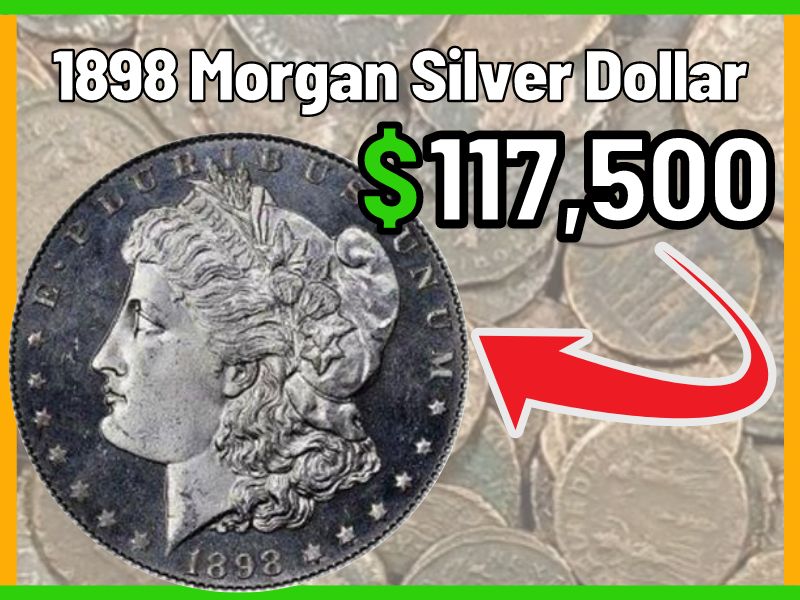 As a coin collector or as a numismatist you have probably wondered, how much is 1898 Morgan silver dollar value? There are numerous variables that alter values, so knowing how to judge condition grades is important. Today we’ll explore these facets in greater detail.

Relatively few people own the 1898 Morgan Silver Dollar especially in uncirculated grades. Despite the low population, it does have value, as do many other silver dollars. For beginners and for those who want to learn about U.S. coin values and history, this page will provide what you need.

The Morgan Silver Dollar was not the first dollar coin produced by the US Mint, but it is one of the most popular coins ever minted. These coins were produced in the latter part of the 19th century and were quite useful. They were circulated a lot.

Although you may be able to find a Morgan Silver Dollar, finding one in great condition is no easy task. With that said, collectors still strive to own Morgans in the best condition possible.

The Morgan dollar is a silver coin minted by the United States government. It was the first standard silver dollar minted after the Coinage Act of 1873 ended the free coining of silver, and it replaced the previous coin design, the Seated Liberty dollar.

The dollar was authorized by the Bland-Allison Act (1878) and struck into coins by the Mint. In response to pressure from mining interests, who wanted to restore free silver, the mint was to accept all silver presented to it and return it, struck into coins.

In a compromise, Congress passed the Bland–Allison Act, which required that between two and four million dollars’ worth of silver be purchased at market value and coined into dollars each month.

The first coins struck under the authority of the Bland–Allison Act were not produced until March 11, more than a week after the passage of the act. The first strike, after adjustments to the press, was coined at 3:17 p.m. at the Philadelphia Mint.

The dollars were minted every year between 1878 and 1904 in 4 different mints. Each mint, with the exception of Philadelphia, has its own mint mark.

The Morgan Silver Dollar is a colorful and treasured relic from America’s western frontier that collectors find appealing because of its historical significance and outstanding design.

In 1876, 30‑year‑old Englishman George T. Morgan, who had studied under the English engraver Leonard Charles Wyon before coming to America, was up to revamping American silver dollar coinage. 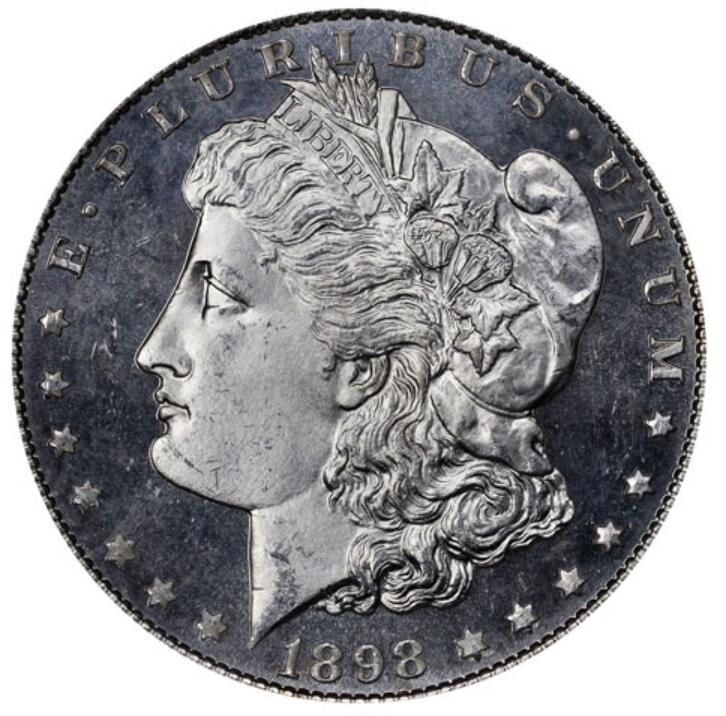 The profile on the front of the coin is Lady Liberty, wearing a headdress that includes a ribbon with the word “LIBERTY” in it and two cotton blossoms and two heads of wheat to represent American agriculture. The thirteen stars around the rim of the coin symbolize the original thirteen colonies at the time of the American Revolution.

A tiny “M” can be found at the base of Lady Liberty’s neck. It is the initial for George T. Morgan, who designed the coin. Above Lady Liberty’s head is the Latin motto E Pluribus Unum, which means “Out of many, one.” This is the unofficial motto of the United States. 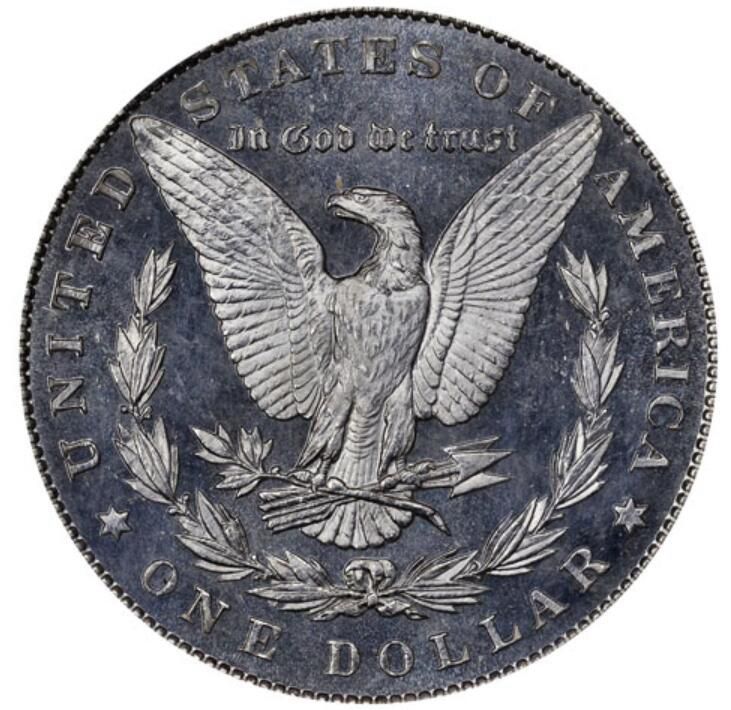 The eagle on the back of the coin is an American bald eagle. In one talon it holds an olive branch and in the other talon it holds arrows, symbolizing that the United States is a peaceful nation but will defend itself when the need arises.

The national motto, “In God We Trust,” is printed above the eagle’s head. Above that are the words “UNITED STATES OF AMERICA.” The mint mark is located at the bottom center of the coin, between the wreath and the words “ONE DOLLAR.”

The U.S. Mint is responsible for producing the coins used as money in the United States. They also produce special edition coins that are sold for collectors’ items.  The 1898 Morgan Silver dollar was minted in three United States mints. It is important to know which mint your coin belongs to, as this would greatly help in determining the value of your coin.

Mintmarks on these 1898 dollars indicate which branch mint made your coin. The main mint in Philadelphia did not use a mintmark, however, look on the reverse above the DO in DOLLAR for marks indicating other mints. 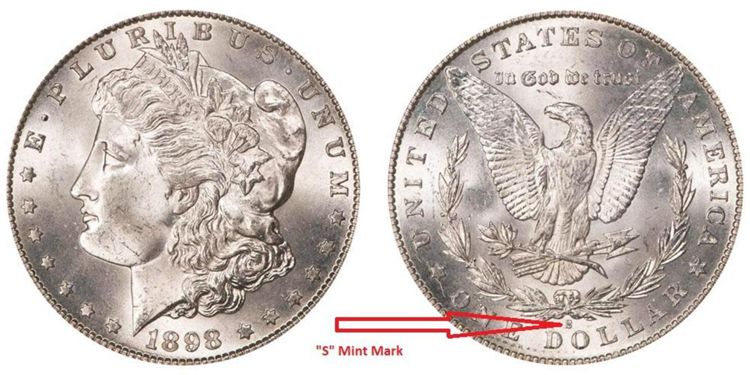 An “S” symbol is located at the reverse of the coin and this symbol is particularly unique to coins that were struck in the San Francisco mint.

When it comes to determining the price of a coin like the Morgan Silver Dollar, there are many factors that must be taken into consideration. In general, collectors tend to pay much more attention to a coin’s condition than they do to its denomination or year of minting.

Condition is key. Coins with high grades (MS-70 or MS-69) can sell for thousands of dollars above their face value. In fact, a MS-69 coin may sell for 10 times its face value! But even a lower grade coin can be worth hundreds of dollars if it shows signs of wear and tear from being handled over the years.

Secondly, the fact that many different versions of the Morgan Dollar were minted every year means that the exact type of coin you own will also play into the asking price. See the table above for an estimate of how much your 1898 Morgan Silver Dollar is worth.

How To Grade The 1898 Morgan Silver Dollar

Uncirculated: If a coin is determined to be Uncirculated, this means that the coin in question will not have been circulated at all. As such, the surfaces of these coins will be impeccably preserved and lustrous, looking as though they were just minted not too long ago. These pieces are the most sought after in the world of collectors, and some of the most expensive. The coin in the mint state looks like a newly struck piece without any signs of wear. Light scratches may occur after contact with other dollars in the bag.

Extremely Fine: A coin that is graded as being Extremely Fine has spent very little time in circulation and has had little contact with other coins. Under close inspection, you will see that the surfaces of the coin have incurred some damage due to their time in circulation. But at first sight, these coins will appear completely flawless to the naked eye. Overall, these coins are an excellent addition to any collection new or old.

Fine: A fine coin is a middle of the road piece that is not in perfect condition, but it has not been damaged too heavily either. When holding these coins, one will notice that the surfaces have been worn down somewhat thanks to the exchanging of hands over the years. Collectors will be thrilled to add these coins to their collections, as they are in decent condition and a cost-effective way to expand a collection.

Good: A coin of Good grade is one that has spent a good bit of time in circulation. These coins will appear to be heavily worn and devoid of most of their design. Even the images and inscriptions on these coins will wear down over time, as they have changed hands from person to person and have gone through machines.

The 1898 is another date that saw large-scale release from the Treasury vaults in the 1950s and 1960s. Even though there was a mintage of just under 6 million coins, this date was quite rare before those vaults were unsealed. The 1898 is plentiful in Mint State. Most are in the range of MS-60 to MS-63. However, at the MS-64 level and above, this issue becomes slightly scarce.

This coin once was one of the most elusive Morgan dollars, but it became a relatively common coin after the discovery and release of many 1898-O bags in Treasury vaults during the early 1960s. Now easily available, the 1898-O Morgan dollar is not nearly as rare as the 1903-O or 1904-O, two other Morgans once thought to be great rarities.

The 1898-S Morgan dollar is a common coin in circulated grades and up through MS64. Gems in the MS65 range or higher are scarce; MS67s are extremely rare. Amazingly, one has been certified as MS68, with premiums for this grade rising into the hundreds of thousands of dollars.

Where is the mint mark on a 1898 Morgan silver dollar?

The mint mark on the Morgan silver dollar is located at the bottom of the reverse side of the coin. Morgan dollars were struck at four different mints: Philadelphia (no mint mark), Carson City (CC), New Orleans (O) and San Francisco (S). If you have a Morgan dollar and want to know where it was made, look for these letters at the reverse of the coin.

Where to Sell and Buy

eBay is one of the most popular places to buy and sell collectibles like coins. You can set up your own listing for free and list as many items as you want at any time. You’ll also receive free shipping on any items that have free shipping from eBay sellers!

Coin shows are great places to find rare coins and other items related to collecting. They’re typically held in large convention halls or hotel conference rooms around the country on weekends throughout the year. Some shows are open only to coin dealers while others are open to the public as well (although dealers will usually pay more than collectors). If you’re looking for a place to sell your coins, coin shows are usually a good option because there are lots of buyers.