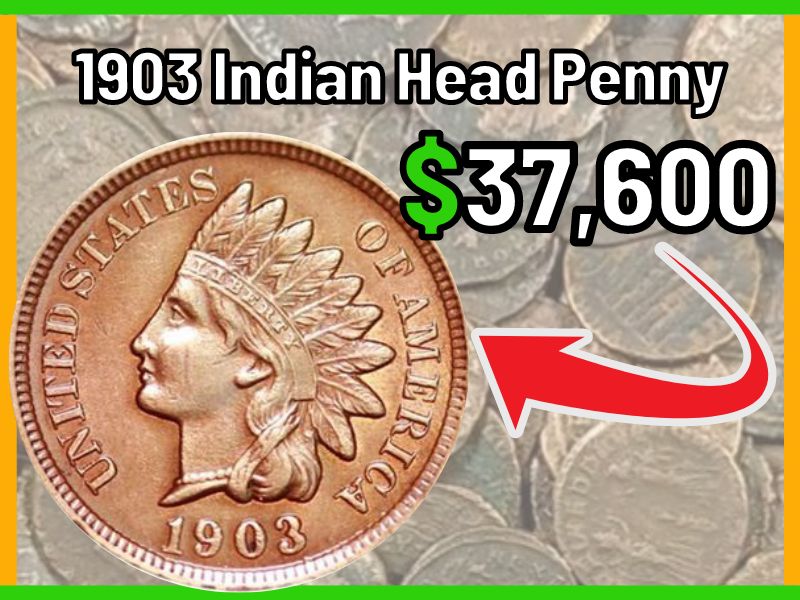 While an 1903 Indian Head Penny in average condition is valued at about $2.50, one in mint state could bring in as much as $5,460. The value of the coin depends on the condition, type of strike and color.

For many people, collecting pennies is a fun and interesting hobby. Indian head pennies are

especially popular among collectors, due to their unique history and design. These coins were first minted in 1859, and they continued to be produced until 1909. Because of their age and rarity, these coins can be quite valuable.

If you’re a collector of Indian Head Pennies, then today’s blog post is for you! In this post, we’ll take a look at the 1903 Indian Head Penny Value. As always, we’ll provide information on how to identify a genuine 1903 penny, as well as some insights on the coin’s value and history. So if you’re curious about what your 1903 penny is worth, keep reading!

Are Indian Head Pennies Worth Collecting?

Today, the Indian Head Penny is a popular collectible coin, and it can be worth a significant amount of money. While common date Indian Head Pennies are relatively affordable, rare varieties can fetch thousands of dollars at auction.

As a result, collectors often look for Indian Head Pennies that are in good condition and that have low mintages. Whether you’re just starting out or you’re a seasoned collector, the Indian Head Penny is definitely a coin worth considering. 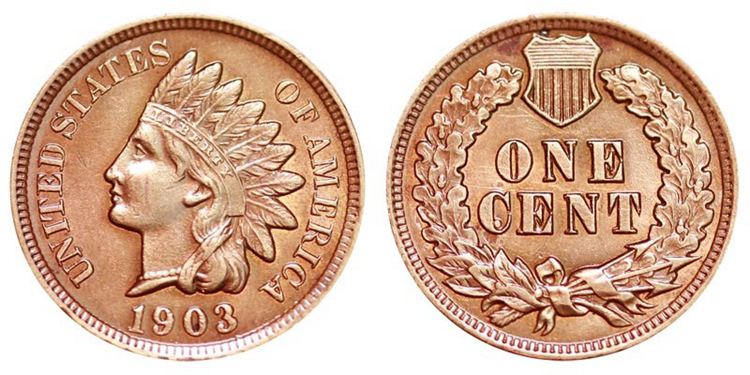 The coin was designed by James B. Longacre. Longacre was an American engraver and designer of coins and paper money. In 1844, Longacre was appointed chief engraver of the United States Mint. He would go on to design some of America’s most iconic coins, including the gold dollar, the three-cent piece, and the Indian Head penny.

Despite its name, the coin does not feature a Native American image on the obverse side. Instead, it features Liberty wearing a Native American headdress. The words UNITED STATES OF AMERICA and the date are also inscribed on the obverse side. The reverse side of the coin bears the denomination of ONE CENT in the center, surrounded by a wreath. A ribbon with arrows tied in at the bottom center also appears on the reverse side.

All 1903 pennies were minted in Philadelphia and do not have a mint mark.

Because copper is an active metal, the 1903 Indian Head Penny occurs in a few stunning multi-color varieties, including brown, red brown and red patina.

Longacre Doubling is a type of doubling that is found on all of Longacre’s designs. It is most commonly found on Indian Head pennies, but can also be seen on other coins designed by Longacre. It is thought to be from the edges of the logo punches, and it’s very common. Because it is so common, it doesn’t usually add to the value of a coin. However, some collectors consider it to be a desirable feature, as it adds to the coin’s history and uniqueness.

The answer to the question “Are 1903 Indian Head Pennies Rare?” is both yes and no. While 1903 pennies are not particularly rare, they are much less common than other dates from the Indian Head Penny series. In 1903, the Philadelphia minted 85,092,703 business strike coins and 1,790 proof coins.

How Much are 1903 Indian Head Pennies Worth?

1903 Indian Head pennies are worth anywhere from a few cents to several hundred dollars, depending on the coin’s condition and type of strike.

According to JM Bullion, most circulated 1903 Indian Head Pennies are only worth between $2 and $10, uncirculated coins can be worth much more – up to $20!

Proof coins are specially made for collectors and tend to be worth more than regular coins. The 1903 Indian Head proof penny is no exception. These pennies were minted in very limited quantities and, as a result, can be quite valuable today.

How to Find the 1903 Indian Head Cent Value

Keep in mind, however, that the value of a coin can fluctuate over time, so it’s important to stay up-to-date on recent sales.

You can also get an appraisal from a professional numismatist. They will be able to take a look at your coin and give you an expert opinion on its value. With a little research, you should be able to find out if your 1903 Indian Head cent is valuable.

What is the Most Expensive 1903 Indian Head Penny Ever Sold?

In 2017, an extremely rare 1903 Indian Head penny was sold at auction for an astounding $37,600. The coin, which was graded PR68 by PCGS, is one of only a handful of examples that exist in such pristine condition. Featuring a beautiful red patina, the coin is considered to be one of the most visually alluring examples of its type. It is also notable for its technical quality, as it features very few blemishes and appears to have been struck with great care. Consequently, it is not surprising that this 1903 Indian Head penny realized such a high price at auction.

In 2009, a 1903 S penny graded MS 67 by PCGS was sold for $37,375, making it the second most expensive 1903 Indian Head penny ever sold. The 1903 S penny is one of the rarest and most desirable Indian Head pennies, with only a handful of examples known to exist in high grades.

Before a coin is graded, it goes through a process where its authenticity is verified, then it is cleaned and finally examined for any damage. After that, the coin is ready to be graded on a 70-point scale. The first step in grading a coin is to hold it up to a light to check for any obvious signs of counterfeiting, such as an incorrect metal content, off-centered striking, or raised lines that should not be there.

Next, the coin is checked for cleanliness; any dirt or debris on the surface will lower the grade. Once the coin has been verified as authentic and cleaned, an examiner will closely inspect it for any damage, such as scratches, nicks, or dents. Based on the condition of the coin, it will be assigned a grade from 1 to 70, with 70 being a perfect uncirculated coin.

The 1903 Indian Head Penny is a highly sought-after coin among collectors, and its value depends on a number of factors. The type of strike, for example, can significantly affect the value of the coin. A proof strike, which was made using a special minting process, is typically worth more than a standard circulation strike. The condition of the coin is also important: a coin that is in mint condition will be worth more than one that is heavily circulated. Finally, the color of the coin can also affect its value.

Can I melt down pennies and sell the copper?

Yes, you can melt down pennies and sell the copper. All things considered, melting down your pennies for profit is probably not worth the risk or effort involved. But if you’re willing to take those risks, it is possible to make some money from your old coins!

What is Longacre doubling?

Longacre doubling is a phenomenon that affects coins designed by Longacre. It is thought to be caused by the edges of the logo punches used during production, which transfer extra metal to the coins as they are struck. As a result, the coins exhibit doubled features on their obverse and reverse sides.

The 1903 Indian head penny is a small copper coin minted by the United States government in that year. It was made of an alloy of 95% copper and 5% tin and zinc, and it had a diameter of 19 mm.