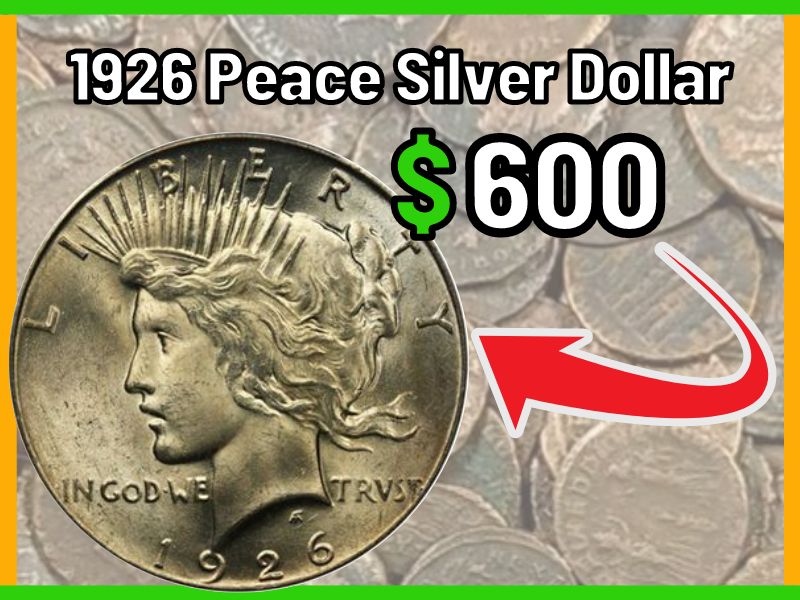 A 1926 peace silver dollar is worth more than its weight in silver, and this value scales with its grade. Generally, one in good condition sells for around $23, while another in extremely fine condition can sell for $41. However, its value rises significantly at higher grades, with one in mint state (MS 65) going for as much as $600+.

As one of America’s most artistic coins, the 1926 peace silver dollar remains a beautiful addition to any collection. While the coin still circulates to some extent today, the majority of them are in good to fine condition.

Minted to celebrate the end of World War 1, the Peace dollar replaced the Morgan dollar in 1921. It has a composition of 90% silver and 10% copper, a weight of 26.73 grams, with the right size to support an impressive artistic expression.

Although some of the minted Peace dollar coins were melted down for their silver constituent, enough still survive to this day.

The history of the Peace dollar started with the need to strike new silver dollar coins to replace the ones melted for sale to Britain during World War 1. By this time, production for the Morgan dollar had already stopped in 1904, after the repealing of the Sherman Silver Purchase Act.

When the war ended, the US mint resumed production of the Morgan dollar to carry out the replacement. However, several numismatists started pushing for a coin that would commemorate the peace.

Even though the earliest proposition for such a coin was traced to an issue of The Numismatist, most collectors regard numismatist Farran Zerbe as the one who had enough influence to move relevant government officials to action.

However, while Congress did not pass the bill to authorize the redesign of the silver dollar, the then Treasury Secretary Andrew Mellon approved the Peace dollar in December 1921.

A Fine Arts competition was held to pick the designer for the proposed dollar, and Anthony de Francisci won. He designed Lady Liberty for the obverse using his Wife Teresa de Francisci, while he submitted two designs for the coin’s reverse.

One depicted an eagle breaking a sword, while the other had the eagle holding an olive branch. The Mint Director initially requested that the broken sword be included in the final design. However, the American public regarded this feature as defeat and kicked against it, prompting the Mint to make quick changes.

Even among the peace silver dollars, the 1926 series remains unique because of a feature that some believe to be a coincidence and others believe to be deliberate. The coin has a higher relief of “GOD” in the sentence “IN GOD WE TRVST” than other coins.

While the majority believe this feature surfaced following the nationwide debate between science and religion, others put it down to mere coincidence. However, no one knows why this coin has this unique feature.

Features of the 1926 Peace Silver Dollar

The 1926 peace silver dollar retains the same features as other Liberty silver dollar coins. However, the only difference is the date which changes based on the coin’s production year.

At coin’s center, you will see the left side profile of Lady Liberty wearing a crown with flowing hair blowing in the wind. Above the profile is the word “LIBERTY,” while the coin’s year of production, “1926,” is struck at the bottom of the coin.

Across the coin but truncated by Liberty’s neck, you will find the famous sentence “IN GOD WE TRVST.” You will find Anthony de Francisci’s initials underneath the profile’s neck.

The coin’s reverse has an eagle at rest at its center. The bird of prey stands on a hill, clutching an olive branch in its talons, with sun rays in the background. Across the coin but truncated by the eagle is the coin’s denomination in words “ONE DOLLAR.”

Above the eagle, you will find the famous motto “E PLURIBUS UNUM,” with the “UNITED STATES OF AMERICA” above it.

Finally, the word “PEACE” is struck at the coin’s bottom. 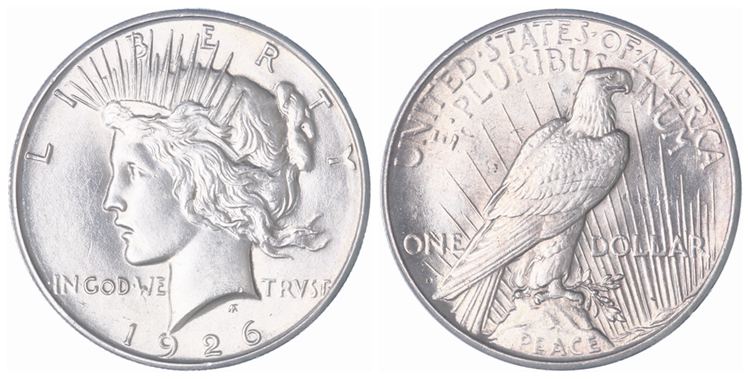 With a mintage of 2,348,700, the Denver mint struck the second highest number of 1926 peace silver dollars. You can tell which coin comes from this facility through the presence of the letter ‘D’ under the “ONE” on the coin’s reverse. 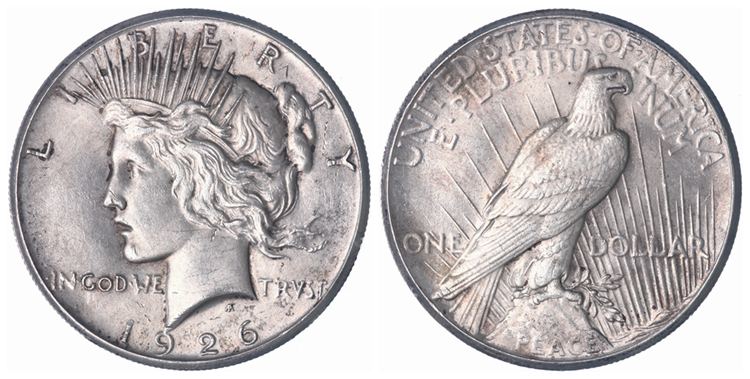 The Philadelphia mint had the lowest mintage of the three Mints with a total of 1,939,000, making the 1926 peace silver dollars from this mint rarer than the other coins. Coins from this mint generally do not carry a mintmark. 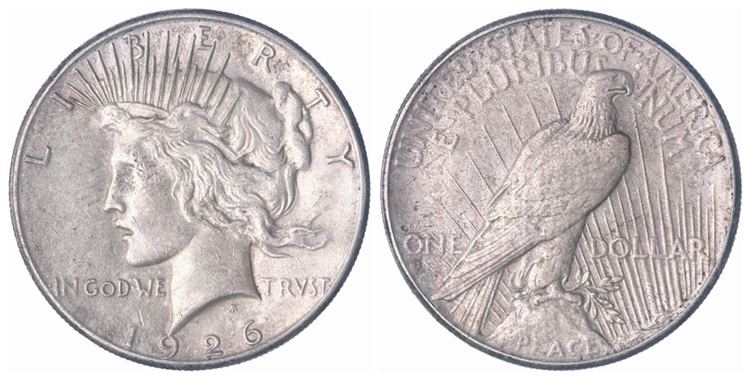 You will easily recognize a 1926 peace dollar from the San Fransisco mint through the ‘S’ letter struck under the “ONE” on the coin’s reverse. This facility had the highest mintage with a total of 6,980,000.

How Rare is the 1926 Peace Silver Dollar?

With a total mintage of 11,267,700 from three minting facilities, the 1926 peace silver dollar does not fall in the rare category. However, some of the coins were destroyed for their melt value, further reducing the overall number available today.

Although finding one with lower grades shouldn’t be difficult, the ones with the highest grades can pose a challenge.

Apart from overall mintage, the demand for the coin also affects its rarity. If demand is high among collectors, the general availability of the coin will reduce the more people add it to a collection. However, this is quite negligible if the total mintage was initially high.

How Much Does a 1926 Peace Silver Dollar Cost?

Despite its theoretical value, 1926 peace silver dollars sell for significantly different values due to some factors. These factors include the coin’s grade, the level of demand among collectors, and the presence of a unique error.

A coin’s grade indicates a lot of things crucial to its value during sale or auction. These things include its eye appeal, physical appearance, level of preservation, and even the presence or absence of damage and wear.

Although the Sheldon Numerical Scale is a well-detailed and comprehensive system of grading coins, most people use the less extensive version. This version categorizes a coin’s grade into two conditions, with one having three subcategories and the other having one main category.

Coins that fall in this category have been spent and have exchanged hands often enough to show signs of wear. As expected, the highest grade in this condition has the most eye appeal of circulated coins.

This condition exists for coins that have never been spent or circulated. As such, they still retain every detail to the extent that only a professional appraiser can identify any damage or wear on them.

If more people desire the coin, its value will increase because it is limited in supply due to its mintage. This is why demand also plays a role in determining a coin’s value. Normally, collectors tend to have a higher demand for rare items.

In every production run, errors are inevitable but not common. Therefore, they add to a coin’s uniqueness and increase its value. While some errors don’t add much, some rare ones significantly increase the coin’s value.

Examples of common errors include

Where to Sell Your 1926 Peace Silver Dollar

While it is not discussed often, selling your coin in the right place also plays a vital role in adding to its value. Naturally, high-value coins are better suited for auctions and online bidding, while you can sell low-value ones to a local coin dealer and pawn shops for quick cash.

Websites like eBay, Etsy, and Heritage Auctions are excellent platforms for selling your 1926 silver dollar online. Since they allow several potential buyers to bid on the coin, it can potentially fetch a much higher price than its otherwise low value.

Nevertheless, you can always prioritize accessibility and comfort when it comes to low-value coins.

The 1926 peace silver dollar draws its value from not only the silver component but also its unique feature. With a higher relief on the word “GOD,” the series remains the only one with such a feature among other peace silver dollars.

Although the coin is not rare, neither is it common, but rather, somewhere in between. If you happen to find one in excellent condition, it can fetch you a decent amount.