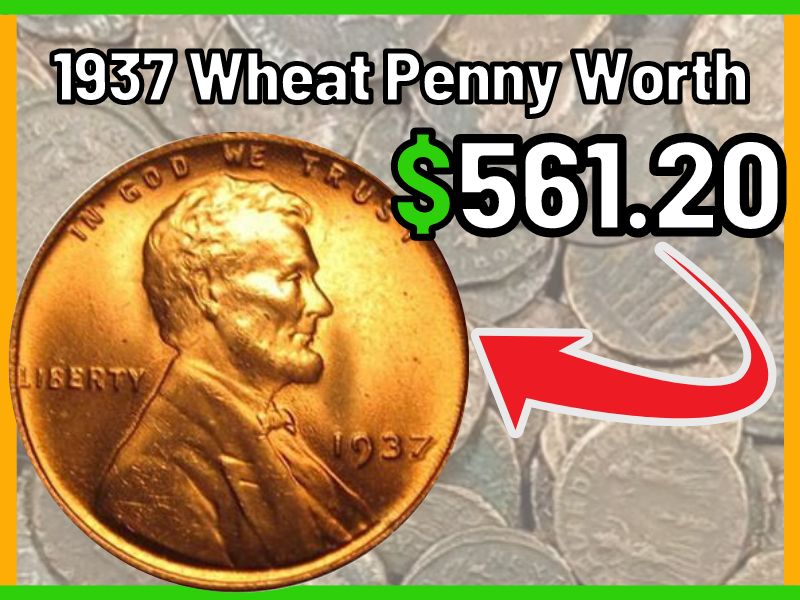 1937 wheat pennies have around the same values regardless of mint mark or type. However, you will notice significant differences in values the higher the coin’s grade. A 1937 wheat penny in good condition sells for $0.015, but one in uncirculated condition can sell for around $8.

Despite its low value, the 1937 wheat penny remains an important coin to collectors. Whether you want to find out how much it is worth or simply want to know everything about the coin, we have got you covered.

Also known as the Wheat Penny or Lincoln Wheat Cent, this series got its name from the design on its reverse. While it enjoyed a 49-year run, it also honors the late president Abraham Lincoln and the resilience of the American spirit.

The Lincoln wheat penny went into production in 1909 with President Theodore Roosevelt’s approval of the coin’s designs. He had initially expressed dissatisfaction with the then artistic state of the circulating American coins and sought to improve them.

Although the president hired Augustus Saint-Gaudens to design this coin along with the double eagle, eagle, half eagle, and quarter eagle, someone else ended up designing the wheat penny’s obverse and reverse.

A major reason for this development was Saint-Gaudens’ death in 1907, leaving the US mint with no design for the wheat penny. The US mint later contracted the work to Victor David Brenner, who became the first to use an actual person for a US coin design instead of the usual practice.

At first, Brenner submitted a design that turned out to be largely similar to the then French silver coins. After the Mint rejected this submission, he devised a design that used Lincoln’s bust for the coin’s obverse and two ears of durum wheat for the reverse.

While its composition changed through the years, the series maintained the same positive reception and circulation.

As a part of the popular wheat penny series, this coin circulated in 1937 and was minted by three facilities in the United States. The coin has the same features on its obverse and reverse as the other ones in the series.

The coin comprises 95% copper and 5% tin and zinc and, therefore, has no melt value compared to coins that contain silver. It weighs 3.11 grams and has a diameter of 19mm, making it no different from other wheat pennies of the same composition.

However, the only distinguishing feature is the coin’s production year, which is 1937 in this case.

Knowing the detailed features of a coin makes it easy to recognize counterfeit and even grade it on your own.

The coin’s obverse has a right-side profile of late president Abraham Lincoln at the center with the words “IN GOD WE TRUST” along the coin’s topside. It also has the word “LIBERTY” struck on the coin’s left side, with its production year in front of the profile.

The most prominent features on the coin’s reverse are its denomination: “ONE CENT” and the words “UNITED STATES OF AMERICA.” These two are struck at the center, with the coin’s denomination above its country.

Along the coin’s top, you will find the famous Latin phrase “E PLURIBUS UNUM.”

On either side of the coin, you will see an ear of durum wheat, which is where the entire series got its name, the Wheat Penny.

With a total of 394,100,000 1937 wheat penny struck for circulation, one can safely say the coin has a high mintage and is not rare to find. Three mints were responsible for striking the coin: the Denver, Philadelphia, and San Fransisco mints.

Of these three, the Philadelphia mint stuck more than 70% of the total mintage, making coins from the facility the easiest to find today. 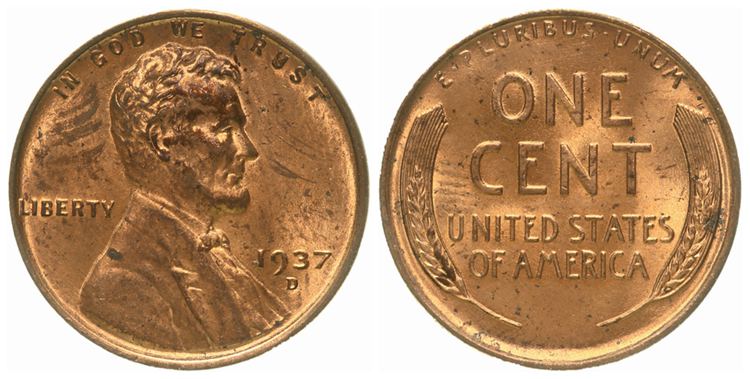 The Denver mint struck the 1937-D wheat penny, giving it the ‘D’ mintmark. With a total of just 50,430,000, this mint struck the second highest or lowest, depending on how you look at it. As such, the coins are only moderately available but are still easy to find.

You will find the mint mark under the coin’s production year.

The Philadelphia mint struck 309,170,000 1937 wheat pennies, placing it at the highest mintage that year. Coins minted at this facility do not carry a mintmark, and because of that, you will not find one on the 1937 wheat penny.

Also, the 1937 pennies from the Philadelphia mint are the most common and cheapest to acquire. This makes them a good starting point for anyone looking to build a Wheat Penny Set.

With just 34,500,000 1937-S wheat pennies, the San Fransisco mint struck the lowest number of the three mints. Coins from this mint carry the ‘S’ mintmark, and you will find it underneath their production year on the obverse.

The 1937-S wheat penny is the least common of the three mints outside of error and proof coins. However, this doesn’t change the almost non-existent difference between the coin prices.

The Philadelphia mint struck only about 9,000 proof 1937 wheat pennies for collectors, effectively making them the rarest of the mints. Numismatists believe that these coins are even less common than error coins.

Because of its rarity, one in an excellent state can sell for a considerable amount of money.

Errors are always bound to happen in production runs, especially for coins with a mintage as high as that of the 1937 wheat penny. The following are some of the most common errors found in these coins.

This error occurs when the hub strikes the die more than once but at a misaligned angle. This causes double prints on the coin and is quite common in 1937 and 1937-S wheat pennies. Words like “IN GOD WE TRUST” and “E PLURIBUS UNUM” show doubled letters.

Coins with an off-center strike error have all their features struck away from their center. As a result, there are varying degrees of blank planchet errors. People who collect this sort of coin can pay up to $100.

If you find one with its date still intact despite the error, you can sell it for even more.

This error causes coins with clean breaks. The error occurs in two parts, a straight clip and a curved clip. However, it can even cause an irregular clip which is quite rare.

Coins with this error have double or triple mintmarks and will sell for more, but not as much as the other errors. Since only 1937-D and 1937-S have mintmarks, you will not find a 1937 wheat penny from the Philadelphia mint with this error.

The US mint produced wheat pennies in large numbers regardless of the year. With such high mintage, these cents are not rare to find, and the 1937 wheat penny is no exception. However, some factors determine a coin’s rarity.

Mintage is a major factor because it influences the number that went into circulation during the production year. High mintage means surviving coins will be much more for collectors to find even decades later.

Based on total mintage, 1937 wheat pennies with no mintmark are the most common and naturally should cost the least to acquire. On the other hand, the proof versions are arguably the rarest and should sell for much more than standard coins.

Although the 1937 wheat penny falls in the category of low-value coins, some factors can further increase or even decrease its value. Attributes like the coin’s grade, rarity, presence or absence of an error, and mintage can all affect a coin’s worth significantly.

As mentioned under the mintage section, coins with high mintage are almost always easy to find. This reduces their value because demand will be lower than the available coins. Simply put, mintage directly affects a coin’s rarity.

A coin’s rarity determines its circulation level during production and availability years after. Collectors generally agree that only coins with a mintage lower than 10 million can be said to be rare. In this case, the 1937 wheat penny had a mintage of over 320 million, effectively putting it in the category of common coins.

Errors like the ‘3-legged’ bison on the Indian head nickel significantly increase the coin’s value. Still, mistakes that prevent essential features like the coin’s date or feature of the profile on the coin will reduce its value.

Nevertheless, common errors only add a little extra to a coin’s worth.

A coin’s value can either rise or fall based on its demand among collectors. Higher demand means auctions and bidding will become more competitive, attracting higher prices and bids for the coin.

However, if the demand is low, the sale price will also be low. Rarity and uniqueness both influence a coin’s demand.

While the factors mentioned above play vital roles in determining a coin’s value, its grade remains the most important factor. A coin’s grade refers to its state at the time of sale, including its physical appearance, eye appeal, and color.

Although collectors have a comprehensive system for grading and categorizing coins, they also have a loose classification for quick use. This method has two conditions: circulated condition and uncirculated condition, with each having sub-grades under them.

Coins that have been spent or struck for exchange and commerce fall into this category. It is further divided into the following:

Coins in this condition have never been spent. This is why most collectors simply refer to their grade as Mint State (MS). Color, details, and even feel have been well preserved through the years.

These coins have the highest value outside of proof and error coins. However, the Mint State is further classified into MS 60 – MS 70, with the latter depicting a perfect condition/grade.

The table shows various grades and the price they sold.

Where to Sell Your 1937 Wheat Penny

Generally, selling your 1937 wheat penny for some quick cash is okay since it is a low-value coin. However, our data shows that your coin can sell for way higher than its theoretical value at high grades.

If you prefer to sell it quickly, you can use pawn shops and local coin dealers. Apart from being a quick outlet, you can also have your coin graded there. These places are good for low-value coins because you might get lesser for your coin.

On the other hand, online platforms and auctions provide an avenue for you to enlist your coin and have people bid on it. This creates a potential for the coin to fetch significantly higher prices than it typically would elsewhere or in a pawn shop. Heritage Auctions and eBay are both wonderful platforms for this.

As a part of the famous Lincoln wheat series, the 1937 wheat penny remains a reminder of a beloved president. The coin is also an excellent place to start when building a Wheat Penny set.

While it has a low value because of its availability, pieces with higher grades can fetch excellent prices, especially online.