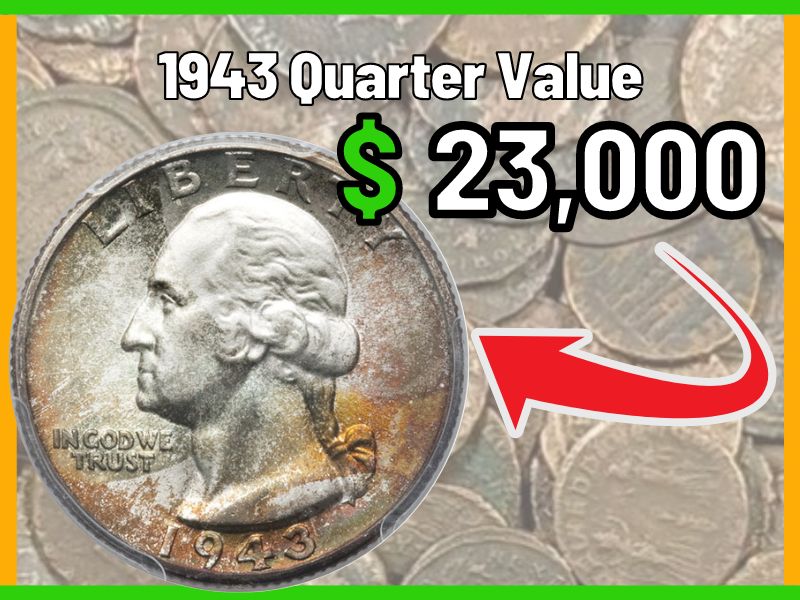 The price of silver is always changing, so it’s hard to say what your 1943 quarter is worth. I’ve put together this 1943 quarter value and price chart for you to reference if you ever discover one in your change or want to sell it. This chart will help you find out how much a 1943 quarter is worth and give you some good selling prices based on its condition.

The current silver bullion or silver melt value of this quarter is $3.45. Values vary from one authority to the other. 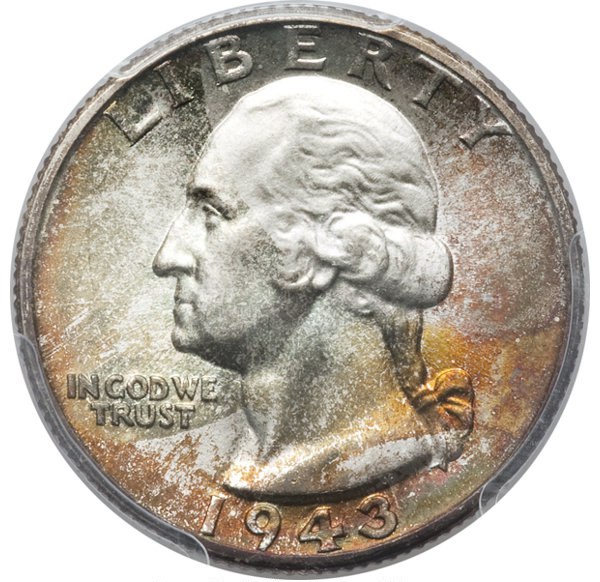 The quarter is a 25-cent coin. Or one-quarter of a dollar. This quarter is one of the coins in the series that enjoyed the use of a heavy amount of silver in its production. The quarter has however been produced off and on since 1796.

The 1943 quarter is a member of quarters that began their lives in 1932. Their value depends on a few factors like the condition or whether they are what is called error coins. Their values are also measured in numismatic and silver bullion terms.

The history of the 1943 quarter is unalienable from the entire history of the series itself. The decision of the United States to have a quarter can be traced back to the Spanish tradition of splitting milled dollars into eight wedge-shaped segments.

The quarter began its journey into the world in the late 1700s. At the time silver was important in the manufacture of coins and the quarter at the time had 89.24% fine silver. The measure was refined to 90% in 1838 and maintained till 1964. Since 1930, designs have been refined and changed. 1796 to 1807 featured the Draped Burst on the obverse and a small eagle on the reverse. From 1815 to 1838 the quarter featured the caped burst. And from 1838 to 1891 the quarter featured seated liberty.

In 1892 to 1916 it featured what was called the Barber design named after the chief engraver of the United States Bureau of the Mint. By 1893 the country was having a commemorative quarter called the Isabella quarter, the Spanish woman who sponsored Columbus’s voyages to the new world. Then from 1916 to 1930, the design featured the Standing Liberty.

The 1943 quarter is a member of the quarters called the silver quarters made from 1932 to 1964. The mints were not simply feeling generous about silver when they made the coins.

It was the era of the great depression and it had cast a pall of darkness on the country.

The public’s spirit was low; soup kitchens were rife, unemployment was hitting the roof, and Americans were in need of something to be happy about at the time. In 1932 however, the country was about to celebrate the 200th anniversary of the birth of George Washington.

The commission of arts called for entries from artists all over the country and entries began pouring in from every corner. The one design portrait of George Washington that appealed to the commission the most was that created by a woman named Laura Gardin Fraser, wife of James Earle Fraser and the designer of the Oregon Trail Commemorative. Her design was medallic, just what the commission envisioned for the project.

The only person who didn’t want the design from Fraser was Treasury secretary Andrew Mellon. This man was an avid collector of art and so had a different mindset when it came to art designs. Mellon eventually chose a design by John Flanagan who was a medallist. His design was considered appropriate for a coin. That was how we came to have the full George Washington’s face filling the obverse.

The quarter design is the same one from 1932 by John Flanagan. It features the main designs we have on most other quarters following that year. The quarter comprises 90% silver and 10% copper. It weighs 6.25 grams and its diameter is 24.3mm. The edges of the quarter are needed. 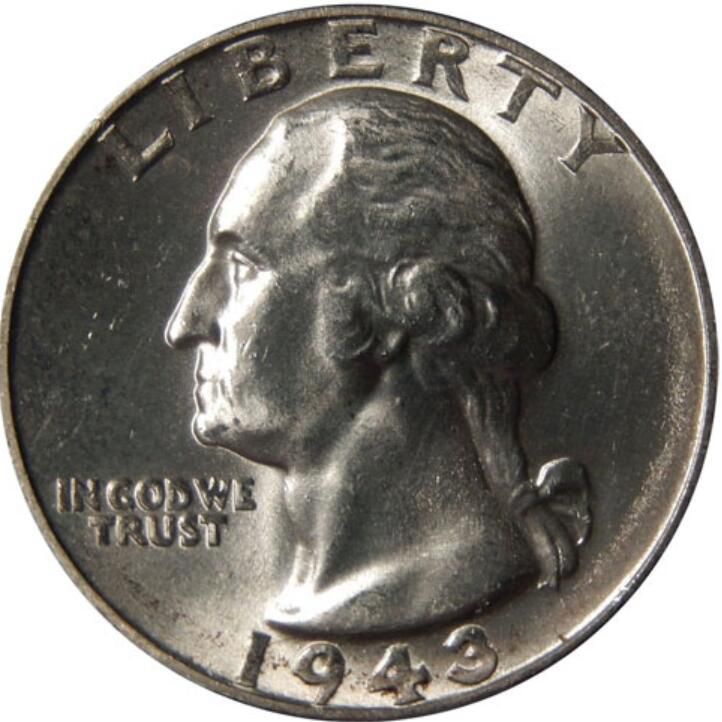 The face of the coin shows George Washington’s face and other letterings. The top of the coin has the lettering “LIBERTY” and on the left near Washington’s jaw are the words “IN GOD WE TRUST” Under George’s neck is the date “1943”. 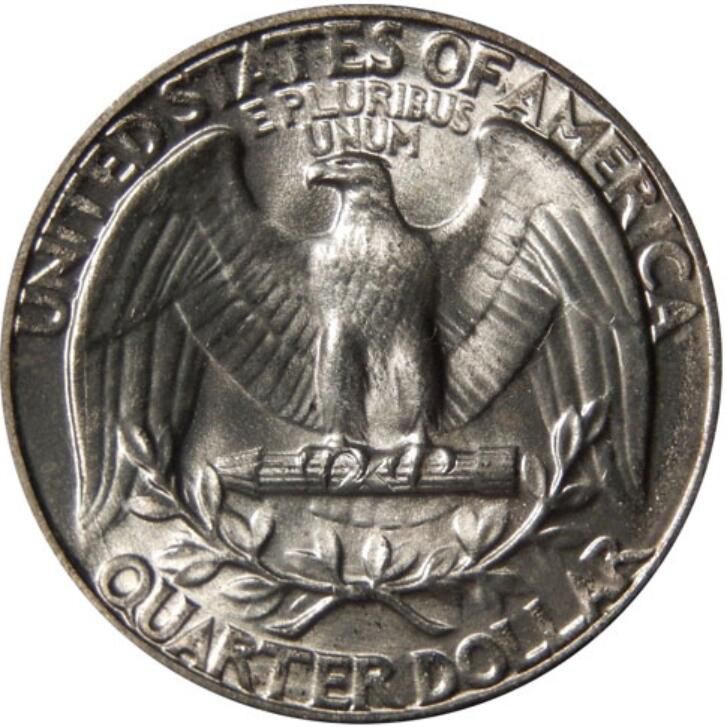 The reverse of the quarter shows the eagle and its spread wings. The eagle has a bunch of arrows in its talons and hovers over a stalk of olives. There are letterings on the coin too. “UNITED STATES OF AMERICA” is written over the top of the coin, under that are the words “E PLURIBUS UNUM” and under the stalk of olive is the date “1943.” If the coin has a mint mark you will find it printed under the stalk.

The article addresses the types of the 1943 quarter and not the series as each quarter we have was produced every year with a few pauses in between. The types of quarters in the year were determined by where the particular quarter was produced which is indicated by the mint mark. 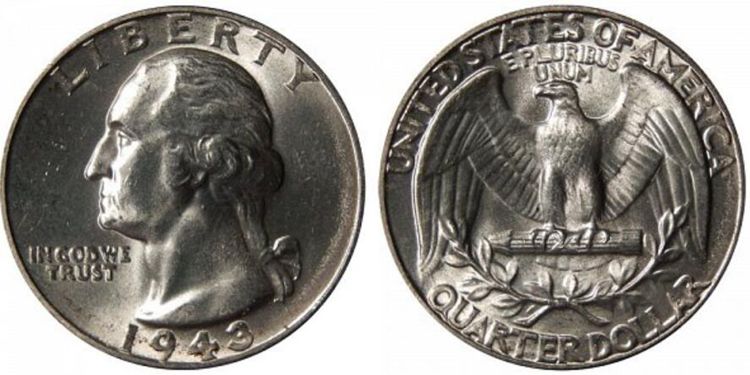 The mint in Philadelphia is the most popular mint in the history of coin production for the country. The mint produced 99,700,000 of the Washington quarter in 1943 and the actual silver amount of it is about $4 now. This quarter has no mark to show that it was produced in Philadelphia as you can see below.

The public and collectors usually love quarters or coins in general that have marks on them. They make for easy identification. The Denver mint produced coins too and they are the second most popular producing factory of American coins.

In 1943 they produced 16,095,600 silver quarters. This makes these coins abundant in circulation today. The D quarter of 1943 is likely to turn up easily in collections. One of the highest on record to have been sold is the one by heritage auctions in 2013 which sold for $17,625 graded MS 68.

Unlike many other US coins, the 1943 quarter has its mint marks on the reverse. Quarters like the 1978 quarter have their mint mark on the obverse behind the neck of George Washington.

There are different authorities and experts on US coins and they all have an opinion on the worth and value of coins. The slight difference you notice in the prices is a result of the fact that each of them has its systems of grading coins.

Coin worth depends largely on this grading system. This isn’t a problem as all quarters exhibit conditions and the result of grading is based on the condition of the particular coin so you can expect that the difference in price is minimal.

The experts apply certain rules and systems when grading a coin. From one expert to the other there’s only a little variation to this system but they all basically focus on the condition and eye appeal of the coin. If a coin isn’t appealing, who would want to pay for it? Below are pointers on how the coin is graded.

This word refers to the freshness of the coin. It appears as though it was never used, and most in this category are exactly this way, never used. The color is white, natural tone, or silver colored like this quarter under discussion. A circulated coin shows signs of abrasion. Look for the loss of luster to determine if the coin is uncirculated.

This coin has very little wear and retains most of the luster and eye appeal. You will find scratch marks that show that it has come in contact with other coins as it came through the machine.

Here the high points on the surface of the coin are worn. Check the hair of George Washington in this quarter for the fine details, and check the eyes as well. If only these details are missing then the coin is extremely fine.

The hairline and curvatures are present but there are flattened areas. The coin shows wear in the high areas.

Here the coin is properly flattened by wear. Major details are losing their edges and merging with their surrounding surfaces.

The estimated value of a 1943 Washington quarter in average condition is $5.06, but it could be worth up to $7.19 to $46 or more in uncirculated (MS+) mint condition. The 1943 quarter value is a relatively easy coin to find in gem condition. Many fully lustrous gems and superb gems survive. 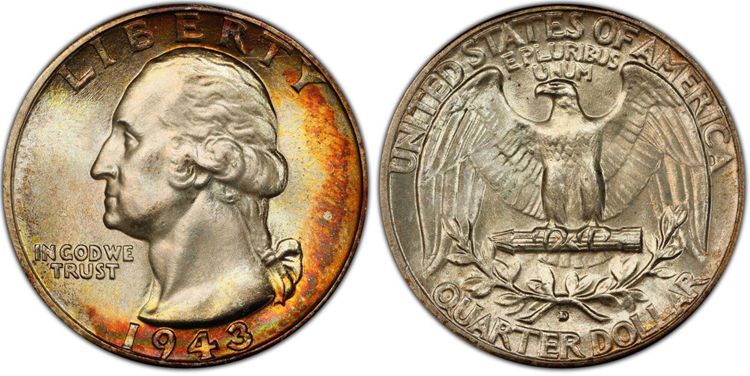 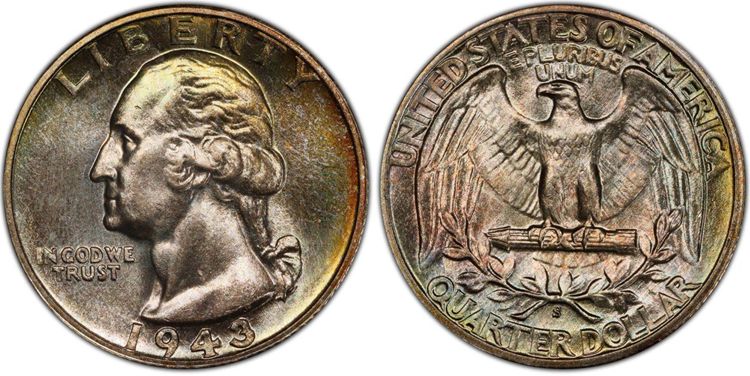 During the roll market’s heyday in the late 1950s and early 1960s, many coin collectors considered the 1943-S one of the best buys among Washington quarters minted between 1941 and 1949. 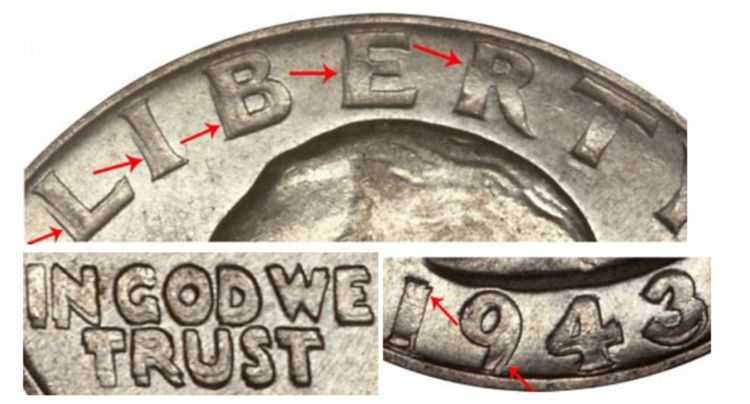 This quarter has an error type that is considered valuable by collectors. You don’t know you have this error coin until you take a close look at the features that constitute the error. Look for the doubling in the letters LIBERTY and the IN GOD WE TRUST.

Lastly, check out the doubling in the date of 1943. The more obvious the doubling, the more valuable the coin. For context consider the photos showing the doubling below.

So how much is a 1943 error quarter worth? Well as said earlier, errors in coins happen to be positive attributes that fascinate and appeal to collectors because they are not features you find in every coin. Below is a chart showing Usacoinbook’s value chart according to the quality of the coin.

Note the higher prices for the error quarters. They are in great condition yet the fact that the coins have an added special feature of errors gives them an edge in the market. Some collectors focus on this kind of coin. They can be found at auctions and online markets like eBay.

How Rare is the 1943 Washington Quarter?

Yes, the 1943 Washington quarter is rare in its mint state. It further accumulates value as a result of high grading. Before investing your resources in the 1943 quarter you may wonder if this coin is rare.

This element of coins is important to you because a ubiquitous coin hardly holds any value other than its weight in metal. One such coin that was referred to as a condition rarity coin sold $11,750. It was graded MS 68 by PCGS. That was the last level in the MS grade which shows how perfect the coin was, hence the price.

So you’re ready with your coins. You found some you think are rare in the family heirloom up in the attic and you believe they would make a killing in the market. Well, there are a few places I would recommend you take your coins to. They could be online or offline.

Every town has one. And if not, the next town has it. Walk into one with your cache and swap them for cash. The owner of the shop is likely proficient in telling a good coin or one that is uncirculated. You can also get your cash immediately.

Yard sales offer another great place to present your coin for inspection and sale. Yard people may not have expert eyes so don’t expect a high price for the coins. Except if you are fortunate to meet up with a collector who is on the prowl for antique coins.

This crop of buyers make up some of the best people to sell your coin to. They know good and valuable coins. They are likely to tell the truth about the coin value. Be sure the expert is trustworthy though. Online spots include eBay, Etsy, and the ones referenced in this article. Some online vendors may offer grading services and you are sure to get a good price if your coin comes out high on the grading scale.

Coins are a very interesting subject to learn about. Whether your interest is in collecting and just storing them at home to wow your visitors, or you just want to make extra money selling them, you will need to study them. And they’re not difficult to understand. You can begin your journey with quarters like the 1943 quarters. They offer the simplicity and flexibility of elements you need to get familiar with American quarters.