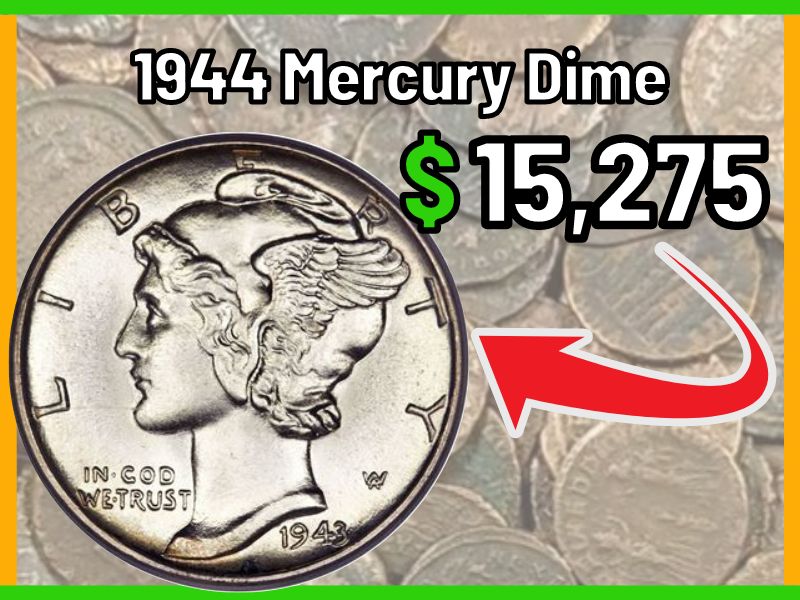 It’s hard to say how much a 1944 Mercury dime is worth without knowing its condition. A circulated coin is typically worth between $2 and $3.38, while an uncirculated coin can be worth anywhere from $6.10 to $27 or more.

Anyone who has ever found a rare coin knows the joy that comes with the discovery. For many people, this joy is enough to motivate them to start collecting coins. However, there is more to coin collecting than simply finding pretty pieces of metal. Collecting coins can be a way to connect with history, form new friendships, and even make a little money.

As a collector, you know that the value of a coin is not always about its face value. In fact, some coins are worth much more than their face value, depending on their age, rarity, and condition. If you’re lucky enough to have a 1944 Mercury dime in your collection, it’s probably worth more than other dimes! Read on to learn more about the 1944 Mercury dime value and what makes it so special.

What are Mercury Dimes? 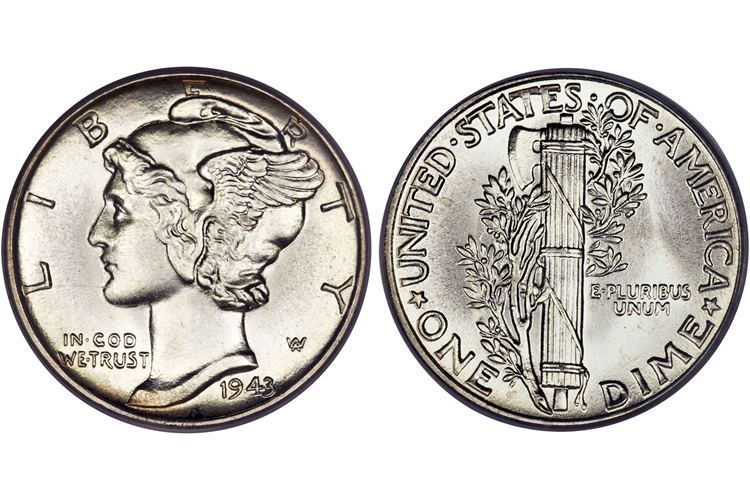 Mercury Dimes are a type of coin that was minted between the years 1916 and 1945. The coin gets its name from the winged figure of Liberty on the obverse, which is often said to resemble the Roman god Mercury. Mercury was the Roman god of commerce, communication, travelers, and thieves. The reverse of the coin features a fasces, which was a symbol of authority in ancient Rome.

There are many incredible similarities between the United States of America and the Roman Empire. Both empires were founded on principles of freedom and democracy. Both have been leaders in art, literature, and science. And both have left a lasting legacy on the world.

Winged Liberty head dimes were minted in 90% silver and 10% copper, making them a valuable collectors item. Today, Mercury Dimes are highly desirable by both coin collectors and those who appreciate history. For many, these coins represent an important part of America’s past, and they are a cherished reminder of our nation’s rich heritage.

1944 was a big year for the United States Mint. Philadelphia, Denver, and San Francisco all produced Mercury Dimes for circulation. A total of 342,124,000 coins were minted, making 1944 one of the most common years for the coin.

Most examples that have survived are in circulated grades. Only a small percentage of coins have been well-preserved and preserved in high grades. This limits the availability of 1944 Mercury dimes in mint state grades and drives up prices for well-preserved examples.

Named for the Roman god of commerce and communication, the Mercury dime was intended to symbolize the nation’s commitment to economic prosperity. The coin was made of 90% silver and 10% copper, with a weight of 0.08 troy ounces and a diameter of 0.7 inches.

The 1944 Mercury dime features the image of a young Liberty on the obverse, with a winged cap and the words IN GOD WE TRUST, LIBERTY, and the date. The coin was designed by Adolph Weinman, and it is considered to be one of the most beautiful coins ever minted.

The winged cap is a symbol that has been associated with the Roman god Mercury for centuries. The cap is typically depicted as a Phrygian cap, which is a type of conical hat that was traditionally worn by shepherds in Asia Minor. The Phrygian cap is often seen in images of Mercury, and it is thought to represent his role as a messenger between the gods and mortals.

The reverse depicts olive branches and Roman fasces. The Roman fasces were a symbol of authority in ancient Rome, and they represent the unity of the American people. The words UNITED STATES OF AMERICA, ONE DIME, and E PLURIBUS UNUM are also inscribed on the coin. E PLURIBUS UNUM is a Latin phrase meaning “out of many, one.” This phrase encapsulates the ideal of a diverse nation coming together as one. 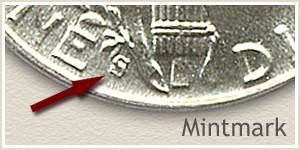 Numismatists (those who study coins) have long been aware of the importance of the mint mark. The tiny letters or symbols stamped on a coin can tell us a great deal about its history and value. The mint mark is located on the coin’s reverse, to the right of the first E in “ONE DIME”.

1944 Mercury dimes minted in Philadelphia do not bear a mint mark. This was because Philly was the main Mint at the time and all dimes were produced there. In contrast, the 1944 Mercury Dime from San Francisco Mint bears an S mint mark, indicating that it was produced at that branch Mint. The Denver Mint also produced dimes in 1944, and their coins bear a D mint mark.

Because relatively few dimes were struck at these two branch Mints, they tend to be more valuable than those from Philadelphia.

If you’ve got a 1944 dime, you might be curious about its value. After all, it’s not every day that you come across a coin from over 75 years ago! Look for similar coins that have been sold recently and compare their prices. This will give you a good idea of the range of prices that your coin might fetch. For example:

Another option is to consult a coin dealer or other expert. They will be able to give you a more accurate valuation based on factors such as the condition of your coin and the current market conditions. Whichever method you choose, researching the value of your 1944 dime is a great way to learn more about the world of coin collecting.

Coins are like any other manufactured product; they are subject to errors and variations. In fact, many coins have well-known errors and rare varieties that can be quite valuable to collectors. Here are some 1944 Mercury dime rare varieties: 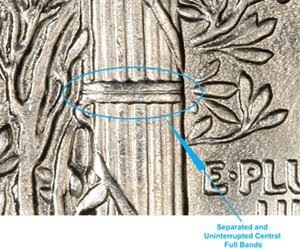 The 1944 Full Bands Mercury Dime is a coin that was minted in 1944 and is distinguishable from other dimes because of the complete horizontal lines in the crossbands of the fasces on the reverse. While some people believe that this is an error, it is actually indicative of a sharp strike. Because of this, the 1944 Full Bands Mercury Dime is considered to be a valuable coin. 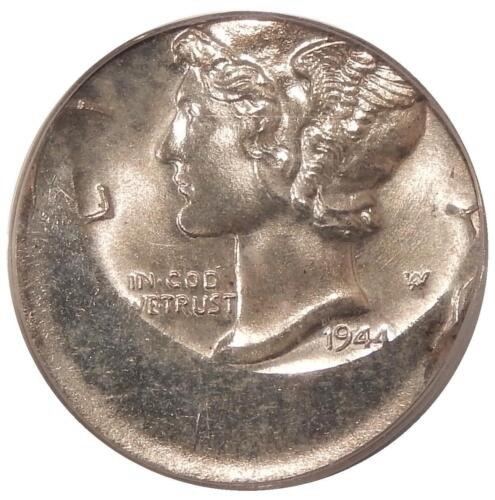 During the minting process, a coin is struck by two dies, one on each side. If the coin isn’t centered between the dies when it’s struck, the resulting coin will have an off-center error. The value of an off-center dime depends on how big the error is. A 1944 dime with an error that’s less than 10% off-center is worth about $100. But if the error is more than 50% off-center, the coin is worth closer to $1,000.

If you’re thinking of selling your 1944 Mercury dime, it’s important to do your research first. There are a lot of factors that can affect the value of a coin, so it’s important to know what you’re talking about before you start dealing with buyers.

The price of a 1944 dime varies depending on its condition. In general, the higher the condition, the more valuable the dime. One of the most important factors in determining condition is the amount of wear on the coin. A coin that has been in circulation for a long time will typically show more wear than a coin that has been stored away in a collection.

Another factor that can affect condition is whether or not the coin has been cleaned. Coins that have been cleaned will often lose their luster and may be less valuable than those that have not been cleaned.

Coins from San Francisco and Denver are generally more valuable than those from Philadelphia, because they were produced in smaller quantities. However, the difference isn’t that big for this coin, so it’s not necessarily worth searching through your change for one from one of these mints. Instead, focus on finding a coin that is in good condition, as this will have a much bigger impact on its value.

The 1944 dime is made of an alloy consisting of 90% silver and 10% copper. The current price of silver is $18.05 per ounce, which means that this coin is worth at least its weight in silver. In addition, the silver melt value for this coin is $1.31 as of now.

One of the most important factors is whether or not the coin contains any errors or rare varieties. Errors can occur during the minting process, and they can be extremely valuable to collectors. Rare varieties, on the other hand, are simply coins that were minted in small numbers and are now difficult to find. While not all 1944 dimes are valuable, those that do contain errors or rare varieties can be worth a great deal of money.

What are full bands Mercury dimes?

Full Bands Mercury Dime is a coin that has complete horizontal lines in the crossbands of the fasces on the reverse. This is not an error, but it is indicative of a sharp strike.

What Mercury dime is rare?

Is a 1944 Liberty dime worth anything?

Some people believe that the date on a coin is an indicator of its value. In reality, the date is just one small factor to consider when determining the worth of a coin. The Mint State (MS) is another important factor.