It was a banner year for the economy in 1964. GDP growth was a healthy 7%, unemployment was just 5%, and inflation was a low 1.4%. Americans were feeling confident and optimistic, and they had good reason to be. And this inspired more coins to be minted.

If you’re a collector, then you know that certain coins are worth more than others. Of course, the value of a coin depends on a number of factors, including its age, rarity, and condition. But if you have a 1964 quarter in your collection, then you may be wondering just how much it’s worth. In this blog post, we’ll take a look at the value of 1964 quarters and provide some tips for valuing yours. So whether you’re looking to sell your coins or just want to know their worth, keep reading to learn more.

What are Washington Quarters?

The Washington Quarter is one of the most iconic coins in American history. First minted in 1932, the coin was designed to commemorate the 200th anniversary of George Washington’s birth. The obverse of the coin features a profile of the first president, while the reverse depicts an eagle in flight.

George Washington was selected to represent the nation on the quarter because of his military successes during the Revolutionary War and his tenure as the first president of the United States. Furthermore, Washington is considered one of the Founding Fathers of the nation and helped to shape the country during its early years. 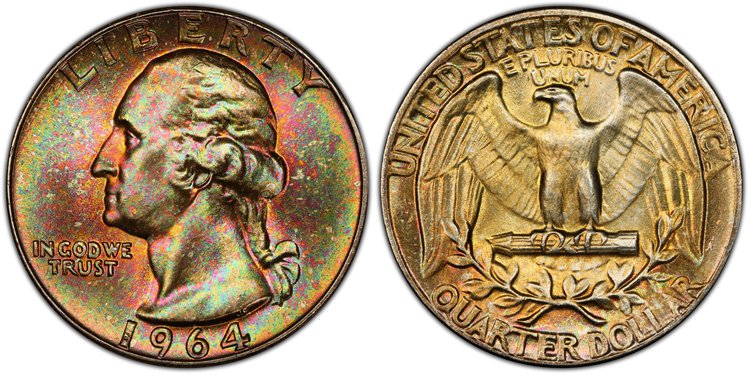 Do you have a 1964 silver quarter? If so, you might be wondering what makes it different from other quarters in your collection. Quarters minted from 1964 and earlier are composed of 90% silver and 10% copper and weigh 6.25 grams. The silver weight of the quarter is .18084 ounces and the total weight of the quarter is 6.25 grams. Quarters minted prior to 1964 are considered numismatic coins and can have value as both numismatic coins and as silver bullion.

On the obverse, you’ll find a profile of George Washington, along with the words “LIBERTY” and “IN GOD WE TRUST.” The date is also included on this side of the coin. On the reverse, you’ll find an eagle with spread wings, surrounded by the words “UNITED STATES OF AMERICA,” “E PLURIBUS UNUM,” and “QUARTER DOLLAR.” This distinctive design makes the 1964 silver quarter a must-have for any coin collector.

The 1964 silver quarter is not a rare coin by any stretch of the imagination. Despite being minted in only two mints, more than one billion were produced. Philadelphia produced 560,390,585 coins and Denver produced 704,135,528. This is actually uncommon because usually Philadelphia produces more coins than Denver. The high mintage for this coin means that there are plenty of them available for collectors.

Additionally, the US mint produced 3,950,762 proof coins which was a record number at the time, so they’re not too rare as well. Proof coins are specially made for collectors and have a cameo appearance. The term “proof” refers to the method of manufacture and not to the condition of the coin. All proof coins are struck twice, or more, by the die. This is done to bring out the design in greater detail and definition than on regular coins minted for circulation.

A circulated coin from 1964 is worth at least its weight in silver. The 1964 quarter has a melt value of around $3.69 as of the time of this writing. However, the value of a coin depends on its condition. A coin in excellent condition can be worth a little bit more than its melt value.

Proof silver coins, which are specially minted coins with a higher level of detail and clarity, are worth around $12 in PR 65 condition. Collector’s item prices can fluctuate greatly over time, so it’s always a good idea to check current market value before buying or selling any coin.

What is the Most Expensive 1964 Washington Quarter Ever Sold?

In 2019, a 1964 Washington Quarter graded SP 66 (Specimen) by PCGS sold for $9,000. This quarter is notable for its satiny finish and significantly sharper strikes than the regular issues of that year. The extra care that went into its production makes it a truly rare and valuable coin. While there are other quarters that are more expensive, this one is certainly the most expensive 1964 Washington Quarter ever sold. It’s a great example of the value that can be found in collecting coins.

In 2020, one such coin graded MS 66 by PCGS sold for $7,800 at auction, making it the second most expensive 1964 Washington Quarter ever sold. While the price of this coin may seem high, it is actually quite reasonable when considering its condition.

How Do I Know if My 1964 Silver Quarter Is Worth Anything?

The easiest way to determine the value of your 1964 silver quarter is to check recently sold prices for similar coins. There are a number of online resources that can help you with this, and it only takes a few minutes to find out what your coin is worth. The most popular resource is ebay. For example:

Factors That Determine the Value of 1964 Washington Quarters

The Sheldon Scale is a standard grading system that is used to assess the condition of coins. Coins that are graded as “Uncirculated” are considered to be in mint condition and will fetch a higher price than those graded as “Circulated.”

Silver coins are worth more than their face value because they contain more precious metal than newer coins. The U.S. Mint stopped using silver in circulating quarters in 1965 because the price of silver had risen to the point where it was more expensive than the face value of the coin. Many people saved these coins as souvenirs or keepsakes, which has helped to increase their value over time.

The silver melt value is the price of an ounce of silver when it is melted down and sold as bullion. This value does not take into account the minting or numismatic value of coins, which can be significantly higher than the melt value. The price of silver is determined by a number of factors, including industrial demand, jewelry demand, and investment demand. The silver melt value is affected by these same factors, but it can also be influenced by other factors such as politics and the economy.

When it comes to coins, there are two main types of strikes: business strikes and proof strikes. Business strike coins are made for general circulation and are usually less detailed and have a lower quality of finish. Proof strike coins, on the other hand, are made using a special process that results in a higher quality coin with a much more detailed finish. Proof coins are usually created for collectors and are not meant for general circulation.

Both kinds of strikes have their own advantages and disadvantages. Business strike coins are less expensive to produce and are therefore more affordable for collectors. However, they lack the detail and polish of proof coins. Proof coins, on the other hand, are more expensive to produce but offer a higher quality finish.

A 1964 quarter is worth at least its weight in silver. The silver content in a circulated coin from 1964 is worth around $3.69 as of the time of this writing. However, the value of a coin depends on its condition. A coin in excellent condition can be worth a little bit more than its melt value. An uncirculated 1964 quarter value is anywhere from $9 to $12, depending on the condition of the coin and whether it is a proof coin.

Only the coins from the Denver mint have a D mint mark. The other coins do not have mint marks. The mint mark can be found on the reverse of the coin. So, if you’re looking for a 1964 quarter with a mint mark, be sure to check the Denver coins.

What is so special about the 1964 quarter?

The 1964 quarter is a highly sought-after coin by collectors due to its high silver content. Prior to 1964, quarters were made of 90% silver and 10% copper. However, in 1964 the composition was changed to a copper-nickel alloy in order to save on the cost of silver. As a result, the 1964 quarter is the last year that quarters were made with a high silver content.