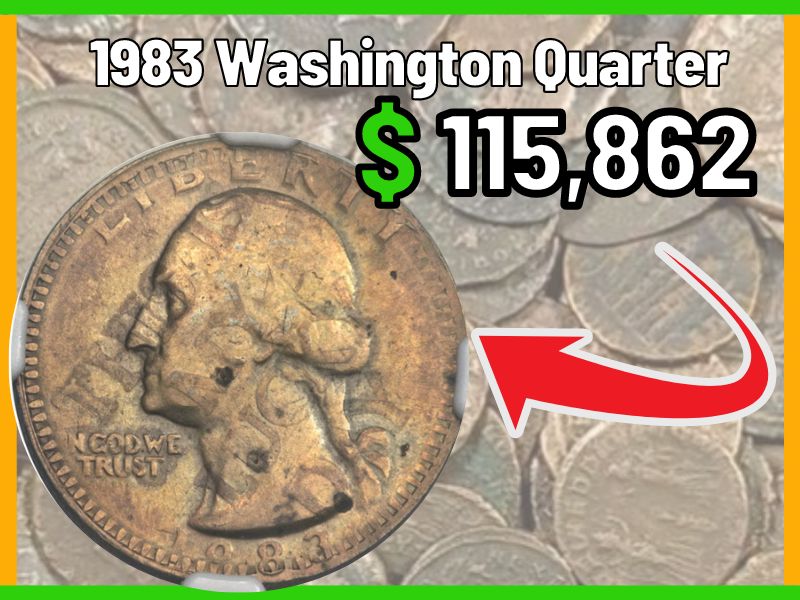 Uncirculated Philadelphia and Denver 1983 Washington quarters can be worth anywhere from $15 to $1,500 depending on the grade and the mint mark, while San Francisco proof coins can be worth from $2 to $75. So, if you happen to have a 1983 quarter in your pocket, it might be worth taking a closer look at it!

Hunting for rare coins can be a fun and rewarding hobby. For die-hard coin collectors, the challenge is not just in finding the rarest coins but also in assessing their value. While some coins are worth only a few dollars, others can be worth tens of thousands or even more.

One of the most popular coins among collectors is the Washington Quarter, which was first minted in 1932. Due to its long history and wide circulation, the Washington Quarter can be found in a variety of conditions ranging from poor to perfect. If you’re interested in this coin, keep reading for our 1983 Washington quarter price value! 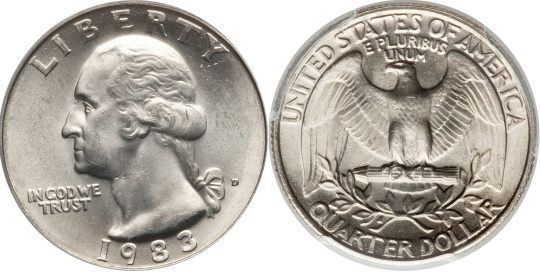 The Washington quarter is one of the most iconic coins in American history. Designed by John F. Flanagan, it was first minted in 1932 to commemorate the 200th anniversary of George Washington’s birth. John Flanagan was a man with a vision. He saw the potential for a nation to come together and create something special – a symbol of unity that would represent all Americans. And so he designed the Washington Quarter.

The obverse side of the coin features a profile portrait of the first president with the words “Liberty” and “In God We Trust”, while the reverse side features an image of an eagle in flight. Words “Quarter Dollar”, “United States of America”, and “E Pluribus Unum” also appear on the reverse. Over the years, the Washington quarter has undergone several changes, but its basic design has remained largely unchanged.

The 1983  Washington quarter is made of a clad composition, which means that it consists of two layers of metal bonded together: 75% Copper and 25% Nickel The coin has a diameter of 24.3 millimeters and a weight of 5.67 grams. It has a reeded edge, which helps to distinguish it from other coins from that period.

Have you ever noticed the small letter on the front of a quarter? That’s called a mint mark, and it indicates where the coin was made. Each mint has a different mark, which helps collectors to identify where a particular coin was produced. For example, quarters minted in Philadelphia have a ‘P’ mint mark, while those minted in Denver have a ‘D’. The San Francisco mint uses an ‘S’ mint mark.

Proof coins are specially crafted for collectors and are usually sold at a higher price than regular circulation coins. Due to their limited production, proof coins can be quite valuable.

How Much is a 1983 Washington Quarter Worth?

If you’re a coin collector, then you’re probably wondering how much your 1983 Washington Quarter is worth. The answer depends on a few different factors, the most important of which are the mint mark and the condition of the coin.

Circulated condition, and $26-$1,500 in uncirculated Mint State condition. It’s important to note that Philadelphia produced the majority of quarter dollars in 1983.

San Francisco produced 3,279,000 proof coins in 1983, and they’re generally worth between $2-$5 in PR 60 grade and $45-$75 in PR 70 grade. Proof coins are specially made coins that are struck more than once to create a higher quality coin. The process of making proof coins is different from that of regular coins, and results in a coin with a shinier, mirror-like finish.

Do you have a Washington Quarter from 1973? You might be surprised to learn that this seemingly ordinary coin can actually be quite valuable. The key to determining your 1973 Washington Quarter value is to compare it to similar coins that have been recently sold. For example:

The most important factor in determining the value of a coin is its condition. A coin that has been well-preserved will be worth more than one that shows signs of wear and tear. Secondly, mint marks can also affect a coin’s value. Coins from certain mints are more rare than others, and as a result, they are worth more. Lastly, errors can also add to a coin’s value. If a coin was minted with an error, it will be worth more to collectors.

There are always a few odd coins that turn up in circulation, and the 1983 Washington quarter is no exception. While most quarters from this year were struck without incident, a handful of errors have been found. Let’s explore those errors! 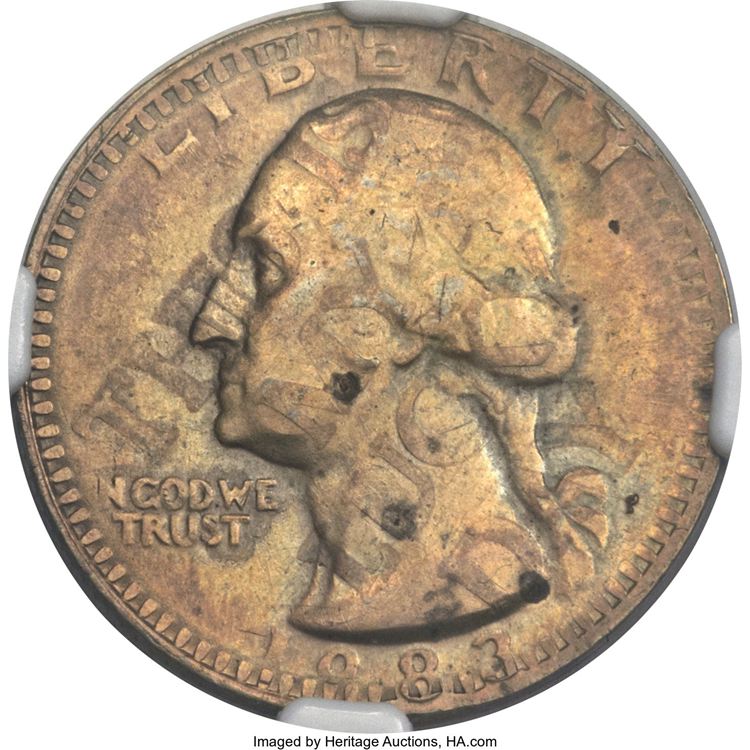 Yes, you read it right! In 1983, a Washington Quarter was struck on a game token instead of a planchet intended for coinage. This resulted in an error coin that is ranked in the 100 Greatest U.S. Error Coins. The overstrike was probably done on purpose by a mint worker.

As a result, this Washington Quarter is one of a kind. It sold for $15,862.50 in MS 65 grade, which is a high price for an error coin. Nevertheless, the unique nature of this coin makes it a valuable collector’s item. 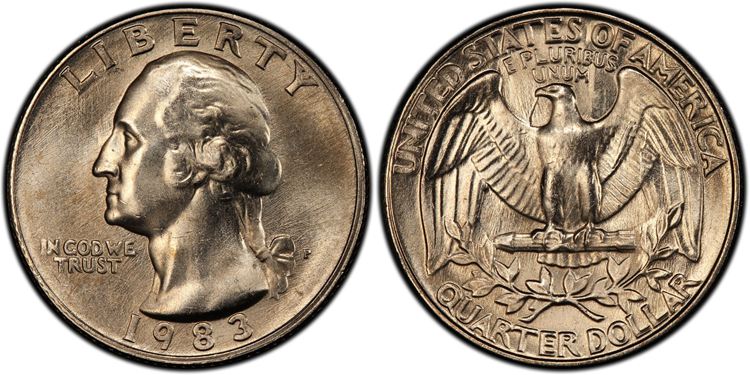 The 1983 Spitting Eagle Quarter is a die crack error that occurs when a raised line appears near the mouth of the eagle on the reverse side of the coin. This makes it appear as though the eagle is spitting. The quarters are selling for prices ranging from $63 to $152.

Die crack errors such as the Spitting Eagle quarter can happen when the die that is used to strike the coins is damaged. The damage can occur during the manufacturing process, or it can happen after the die has been in use for some time. When the die is damaged, it can cause raised lines or cracks to appear on the coins that are struck with it. 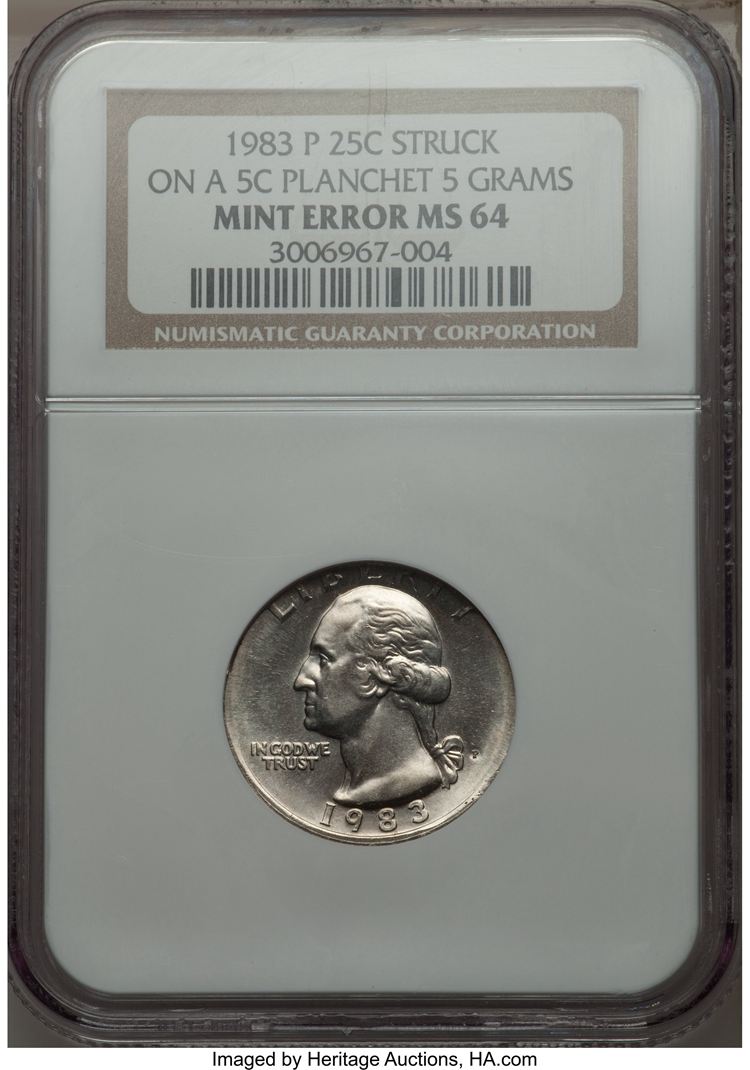 So, how does this error happen? The answer lies in the manufacturing process. During production, the individual planchets are fed into a spinning drum that sorts them by size. However, on rare occasions, a planchet intended for the 5 cent coin can be mistakenly fed into the quarter press, resulting in an error coin. Fortunately, these coins are relatively scarce and provide collectors with a unique opportunity to own a piece of history. 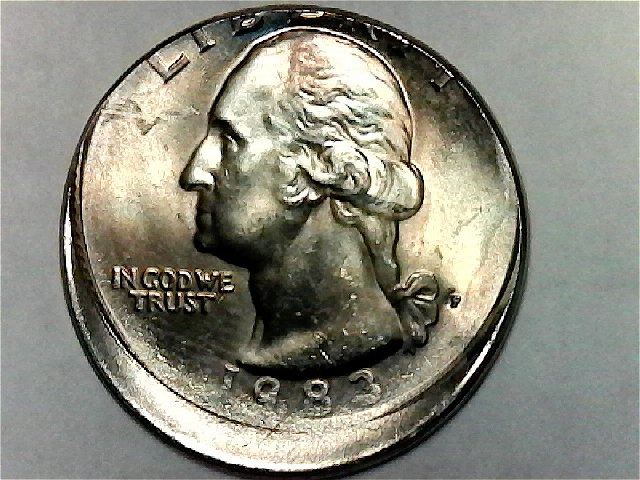 Any experienced collector knows that errors can occur during the minting process, resulting in coins with various defects. One type of error is an off-center strike, which occurs when the coin is not struck properly in the center of the die. As a result, the design on the coin is shifted to one side.

How much is a 1983 D Washington quarter worth?

1983 D Washington quarters are worth between $2 and $110, depending on their grade. These coins were minted in Denver, and they feature George Washington on the obverse side and an image of the eagle on the reverse.

How much is a 1983 spitting eagle quarter worth?

A 1983 spitting eagle quarter is worth anywhere from $63 to $152, depending on the condition of the coin and where it is being sold. Very few of these error coins exist, making them relatively scarce. Consequently, they are highly sought after by collectors and can command high prices.

Which quarters have the spitting eagle?

This error occurred on quarters minted at the Philadelphia Mint in 1983. The error occurs on the obverse side of the coin, where the eagle appears to be spitting rather than soaring. Who would have thought that a simple mistake on a coin could be worth so much money? But that’s exactly the case with the so-called “spitting eagle” quarter.

In general, quarters from this year are not especially rare. However, if you have a quarter that is in pristine condition, it could be considered rare. Just 11 1983 quarters have been graded MS 67 by professional coin evaluators.

Whether you’ve inherited a 1983 Washington quarter from a relative or come across one while searching through old pockets, you might be wondering how much it’s worth. The answer depends on several factors, including the condition of the coin and the mint mark.

Uncirculated coins – those that haven’t been used in circulation – can be worth anywhere from $15 to $1,500. Proof coins – those that were specially made for collectors – are generally worth more, with prices ranging from $2 to $75. However, it’s important to note that even well-preserved coins may not be worth more than their face value of 25 cents. Thanks for reading!