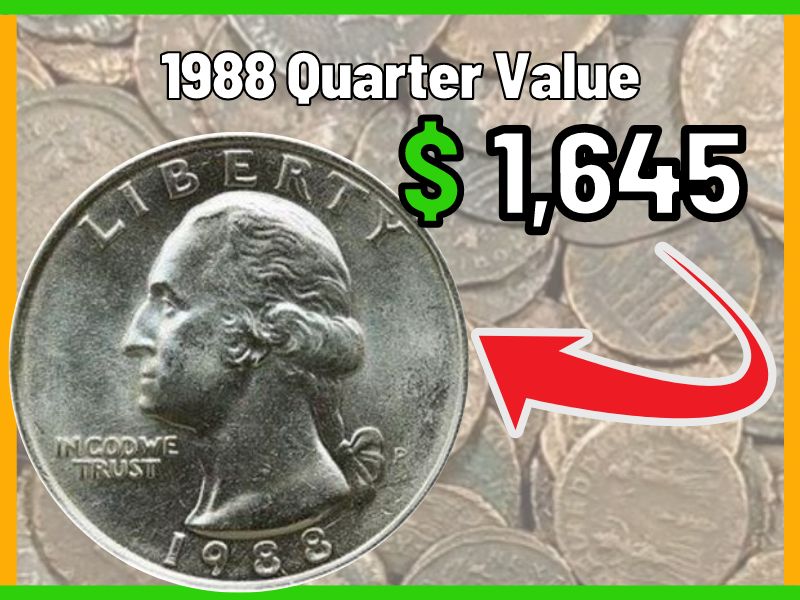 I must assume you are searching for the 1988 Washington quarter value and price chart for one main reason. That is because you have a well-worn coin in your hand that has an eagle sitting on an olive branch on the back side along with the motto of the United States. The front of the quarter has an image of George Washington’s profile and he appears to be looking at something both impressive and important.

Ever wondered how much is a 1988 quarter worth? Well, you’re in the right place, this guide will help you know the estimated value of your 1988 Washington Quarter. 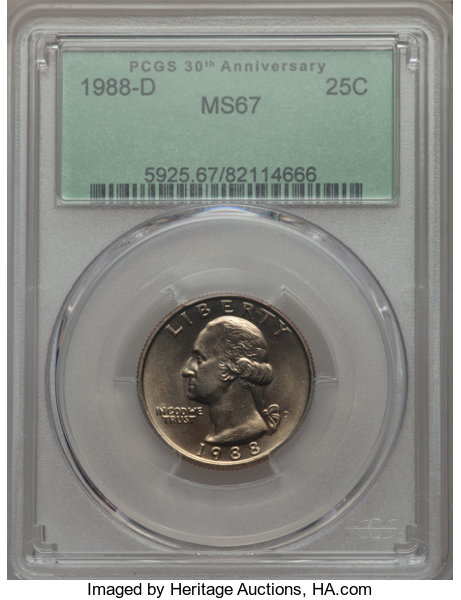 The Washington quarter is the present quarter dollar or 25-cent piece issued by the United States Mint. The coin was first struck in 1932; it has been redesigned several times since then.

The Quarter featured the same design from 1973 through 1974, and again from 1977 through 1998. From 1975 through 1976, it featured a different design on the reverse to honor the bicentennial of the Declaration of Independence.

The coin features a portrait of the first President of the United States, George Washington. Born on February 22, 1732, Washington was commemorated on this coin to mark the 200th anniversary of his birth.

In 1932, as the United States prepared to celebrate the bicentennial of the birth of its first president, George Washington, members of a committee established by Congress sought a Washington half dollar to commemorate the event.

The mint wanted to replace only the Standing Liberty quarter with a new coin that year; instead, Congress made it permanent and required that a depiction of Washington appear on the obverse of the new coin.

The committee engaged sculptor Laura Gardin Fraser to design a commemorative medal and asked her to adapt the design for use for a quarter.

Despite being supported by the Commission of Fine Arts and its chairman, Charles W. Moore, Treasury Secretary Andrew W. Mellon chose a design by Flanagan for the new currency, and his successor, Ogden L. Mills, refused to disturb the decision.

The Washington quarter was created by renowned sculptor John Flanagan; his design, chosen over 97 others in an open competition, is the second regular-issue US coin to picture a famous American. 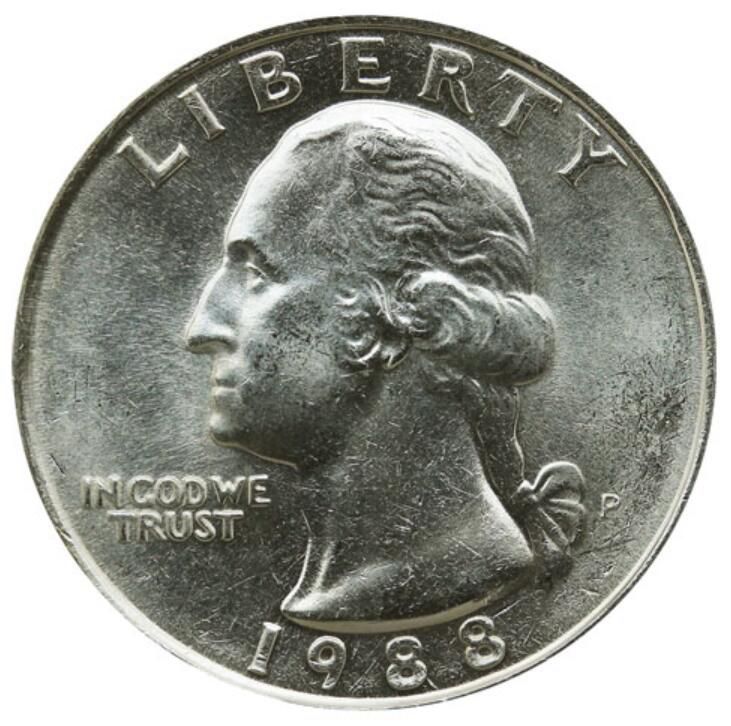 The obverse of the coin features the head of George Washington facing left. It was the 200th anniversary of George Washington in 1932 that led to this decision, which was made to honor the first president. The fact that George’s portrait is on the left side of the coin has no real significance; it is simply a design factor determined by Victor David Brenner in former pennies. 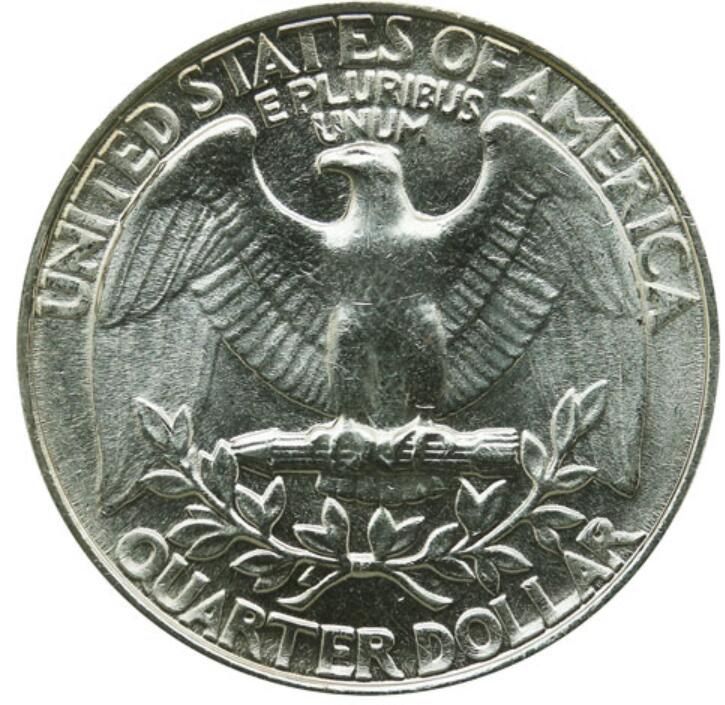 The reverse of the 1988 Washington Quarter is more detailed than the obverse. The back of the coin depicts an eagle with wings spread, standing on a bundle of arrows with two olive sprays beneath it. The words “QUARTER DOLLAR” appear just below the olive sprays. The “UNITED STATES OF AMERICA” appears at the top-rim of the coin. Just above the eagle’s head is the motto of the United States “E PLURIBUS UNUM”

The United States has three mints where coins are made by the authority of Congress. The Philadelphia, San Francisco, and Denver mints all made substantial amounts of the quarters and stamped their marks on them including the Philadelphia mint which originally did not stamp mint marks on the obverse.

All 1988 Washington Quarters were struck the same, the only way to tell the difference is by looking at the mint mark on the obverse of the coin.

Over 500 million coins bearing the 1988 date and P mint mark were circulated for public use, while some of them were saved for coin collectors. Finding a 1988 P coin might not be difficult in lower grades.

Denver mint coins always have the unique “D” mint mark on them. The 1988 D Washington Quarter isn’t an exception. The Denver mint struck the highest number of coins bearing the 1988 date. A total number of 596,810,688 coins were struck and a lot of those went into circulation for public use.

If your 1988 quarter has a D mark on the obverse, it simply means the coin belongs to the more than 596 million coins struck at the United States Denver Mint.

There are many different authorities and experts on U.S. coins, and each of them has his or her own opinion on the worth and value of coins. The slight difference you notice in the prices is a result of their systems for grading coins.

Uncirculated: A coin in this category shows no signs of wear. It looks new, as though it was never used. The color is white, or a natural tone. A circulated coin has lost its luster and shows signs of abrasion. Look for the loss of luster to determine if the coin is uncirculated. The Washington Quarter in this grade is a valuable coin, eagerly collected by many people.

About Uncirculated: This coin has a light amount of wear, but it still retains most of its luster and eye appeal. You will see marks on this coin that show it has come in contact with other coins as it passed through the machine.

Extremely Fine: The highest points on the surface of this coin have been worn, so check the hair of George Washington in this quarter. If only these details are missing, then the coin is extremely fine.

Fine: A Washington quarter in the fine grade shows clear wear on the highest parts of the design. These quarters have a somewhat “faded” appearance. The hairline, curvature of the neck, and high points are still evident but there are flattened areas where the design has worn away.

Good: Here the coin has been worn down by use. Its details are no longer sharp, and they have merged with the surrounding surface.

The 1988 Washington Quarter is a coin worth between $0.30 and $0.85 in circulated condition, but there are several factors that can increase or decrease this value.

In circulated conditions, a quarter of any year will have noticeable wear on its surfaces due to everyday use. This wear may include scratches, nicks, and dings that reduce its value significantly compared with uncirculated or mint condition pieces.

In uncirculated condition, the 1988 quarter is considered a valuable coin, it is usually a flawless coin that has not been used for any form of transaction.

Unlike early quarters that contained silver, the 1988 Washington Quarter contains 91.67% Copper – 8.33% Nickel which doesn’t give it a significant melt value. 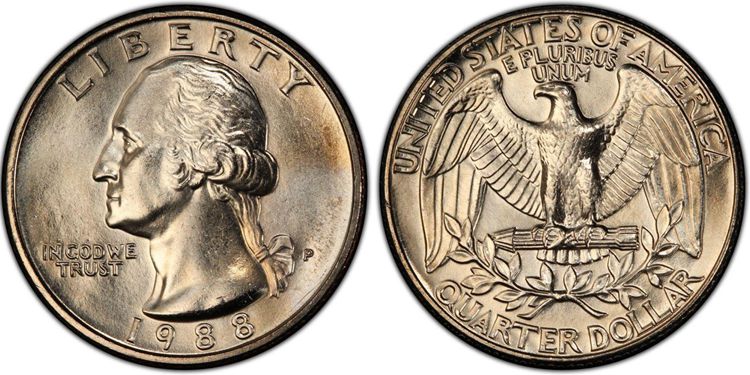 In 1988, Denver produced more quarters than Philadelphia. However, with just under 1.2 billion Washington quarters produced that year, numismatic value is at a minimum. Only common values are seen in Washington quarters minted in 1988, and even those coins graded at 63 or above may only fetch nominally higher prices. 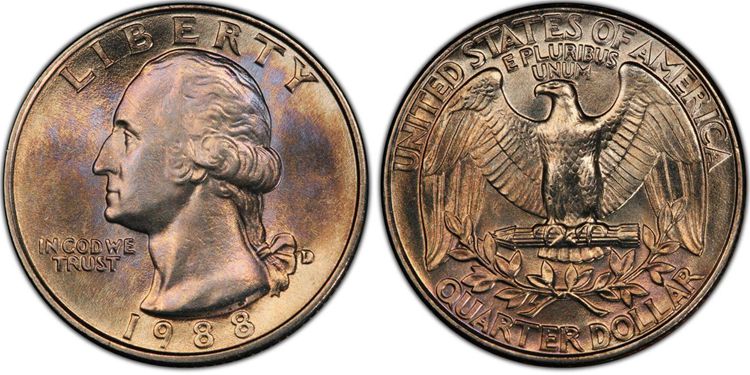 To illustrate this point, let’s consider the 1939 Washington Silver Quarter. There are more than 250 examples of this coin graded in MS67 condition, with at least 15 examples graded higher. Compare this to only 8 examples of the coin in MS67 condition with one example finer for the 1988-D issue. This issue is definitely tough to find and widely underestimated by collectors.

Buying And Selling The 1988 Quarter

The 1988 Washington quarter is a popular coin, and it’s not hard to see why. It’s one of the most colorful issues in the series, with a design that commemorates the 200th anniversary of George Washington’s birth. Whether or not the coin is highly sought, you could still buy this coin as an addition to your quarter collection or sell it.

There are a few places where you can buy and sell the 1988 Washington quarter. These include coin shops, coin shows, online auctions, and coin club auctions.

Coin shops can be found in most major cities as well as small towns across the country. They are a great place to meet other collectors and learn about coins. Many shops have websites where they sell their inventory online. You can also find them listed on eBay or other online auction sites.

Coin shows are another way to buy and sell your coins for cash. They are usually held at hotels or convention centers and feature hundreds of dealers who offer a wide variety of coins for sale. Most shows charge admission fees that range from $2 to $10 per person and some allow you to bring items in to sell while others require you to register before entering the showroom floor.

Online auctions are another popular way of buying and selling coins because they offer 24-hour access to buyers around the world while allowing sellers to reach thousands of potential customers at once without having to leave their home computer! Some examples include; HA.com, Greatcollections.com, and eBay.

Which Washington silver quarters are valuable?

All Washington quarters made between 1932-1964 are considered valuable coins, they belong to the Silver Composition coins and contain 90% Silver – 10% Copper. Below is a list of the most valuable silver quarters in the series;

The 1988 quarter belongs to the clad composition coins from 1965-1998, the coin doesn’t have much value and isn’t highly sought by coin collectors. It contains 91.67% Copper – 8.33% Nickel which brings its melt value to the barest minimum.

The 1988 quarter is an appealing coin if it’s in great condition but don’t expect top dollar for the piece. Many collectors looking for older coins will pass over this year’s issue in favor of previous years. The 1988 Washington Quarters are generally worth face value.

The 1988 Washington Quarters are generally worth face value. Uncirculated examples in MS-67-68 are worth a small premium, making them slightly better buys than anything else. However, any glaring imperfections in the coin, or worse still signs of wear, will severely reduce this coin’s value. Washington Quarters should be seen as inexpensive coins that are perfect for adding to your collection or starting a collection from scratch.