Silver certificates are no longer in production and are worth only their face value, not their value in silver. However, a Silver certificate’s value remains subject to several factors, including its serial number arrangement, among other things.

Although still regarded as legal tender, these notes are mainly valued by collectors. It is important to note that despite being in demand by those seeking to build a collection, not all Silver certificates are considered collectibles.

What is a Silver Certificate?

Investopedia explains a Silver certificate as a form of paper currency accepted as a legal tender. Silver certificates were issued by the U.S. federal government between 1878 to 1964 and are only worth their face value today

These certificates looked similar to banknotes but were different in size and provided a way for people to purchase and own silver without carrying it around. Before their end in 1964, people could redeem these certificates on demand for the exact amount of silver they represented.

The U.S. government initially issued large-sized silver certificates from 1878 to 1923 but switched to smaller-sized ones from 1928 to 1957. While the former covered a wider range of denominations, the latter only featured $1, $5, and $10.

All the certificates featured one to two individuals, including past presidents and first ladies.

The advent of Silver certificates began with the Coinage Act of 1873, effectively ending the United States’ bimetallic standard. With the Act putting a stop to the right to coin silver into legal tender money, it didn’t apply to gold.

Three years later, this Act led to the demonetization of silver, which affected both mining companies and people who have accumulated wealth in silver. The push was so much so that people nicknamed the passage of the Act as the Crime of ‘73.

To counter the raising issues, Congress passed the Bland-Allision Act on February 28, 1878. This required the United States Treasury to buy between $2 million to $4 million dollars worth of silver bullion every month. The Treasury was to buy the silver from mining companies and even individuals who have silver to sell, using them to mint coins for circulation.

The Silver certificates therefore, represented a comfortable means for people to purchase silver but instead of carrying the silver, they would have the certificates as proof of the exact amount they own. They can then redeem the silver at anytime by exchanging it for the certificates.

Although the certificates were recognized as a legal tender, the reception was not outrightly positive because it wasn’t suitable for transactions between individuals.

When the printing of Silver certificates began in 1878, they circulated as large-sized notes. However, due to reduced cost, they started issuing smaller-sized notes on July 10, 1929. The only difference between both types is their sizes as they had the same features and details.

The United States Treasury issued these notes between 1878 to 1923. Although the certificates were recognized as legal tender, the reception was not outrightly positive because it wasn’t suitable for transactions between individuals.

In a bid to further encourage circulation, Congress ordered them to be included in lawful reserves of national banks. Another decision that proved efficient in increasing circulation was the production of the certificates in lower currencies i.e. $1, $2, $5, while putting a temporary stop to the production of federal notes under $5. 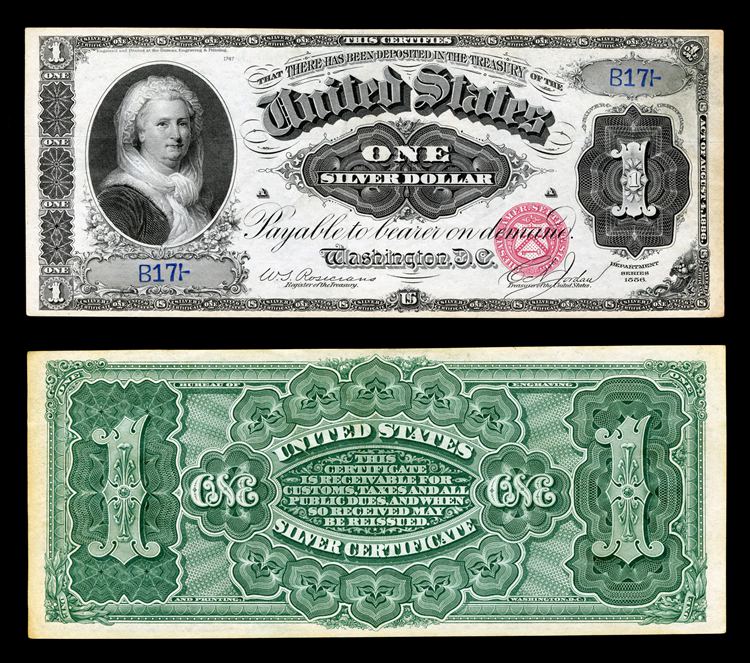 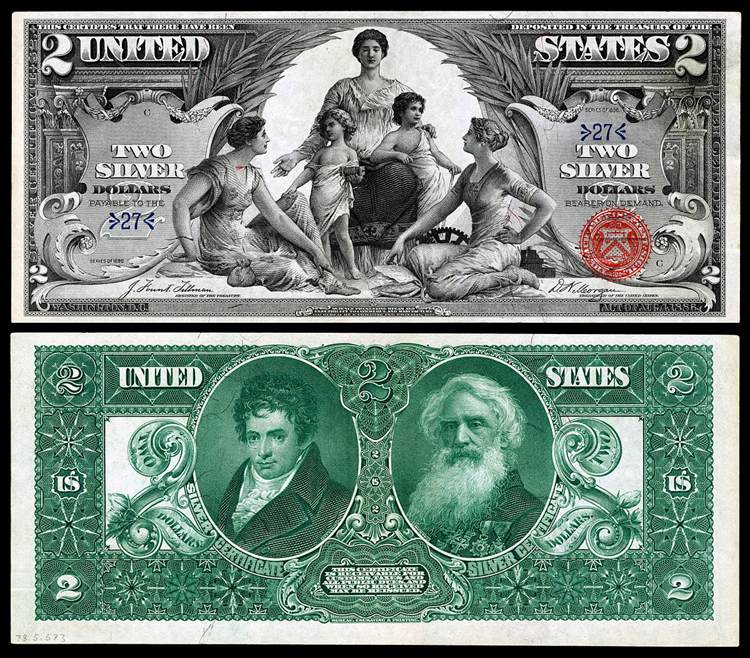 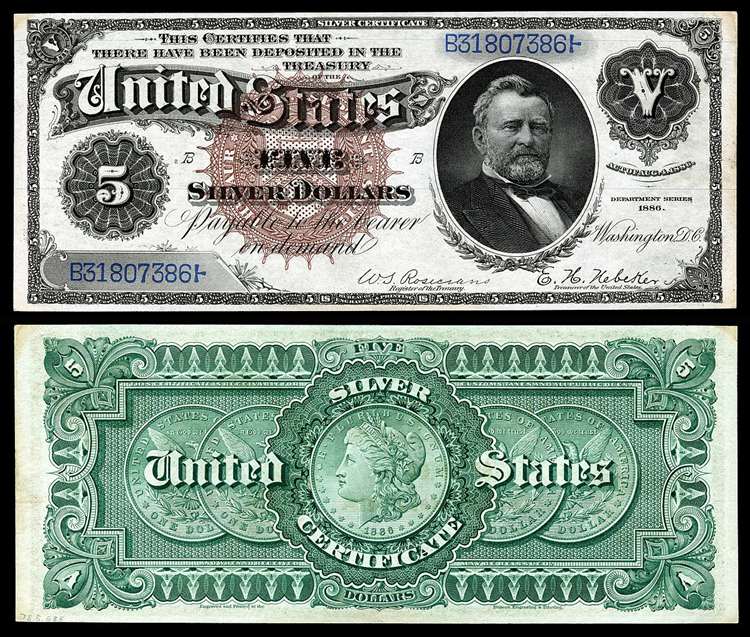 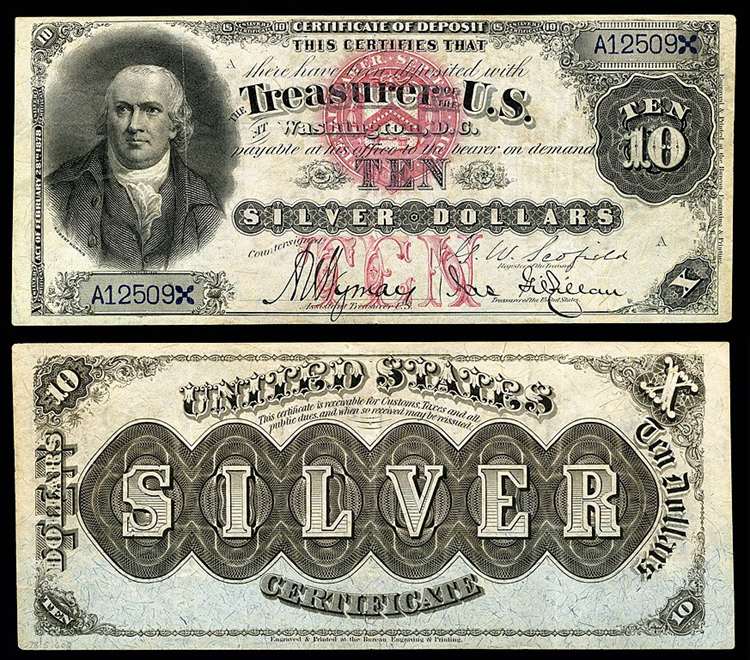 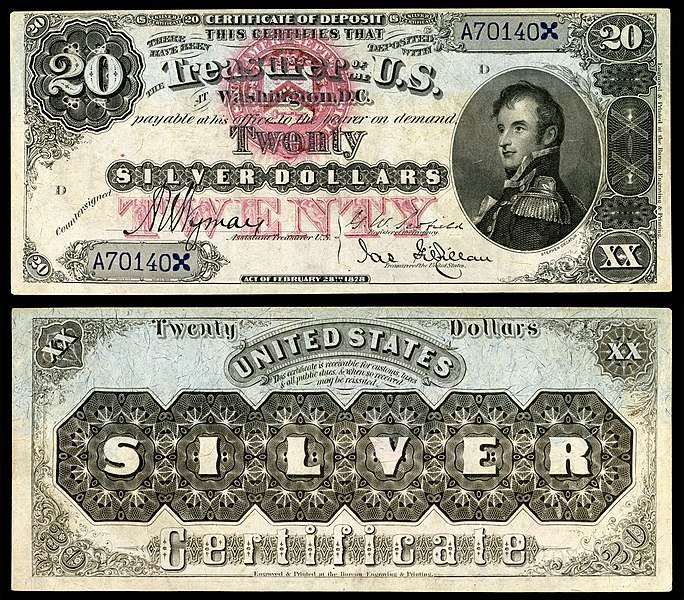 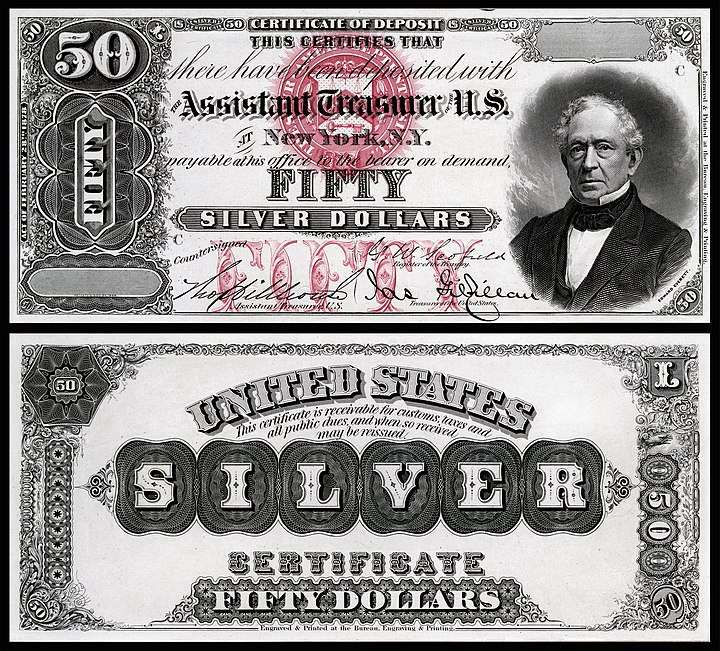 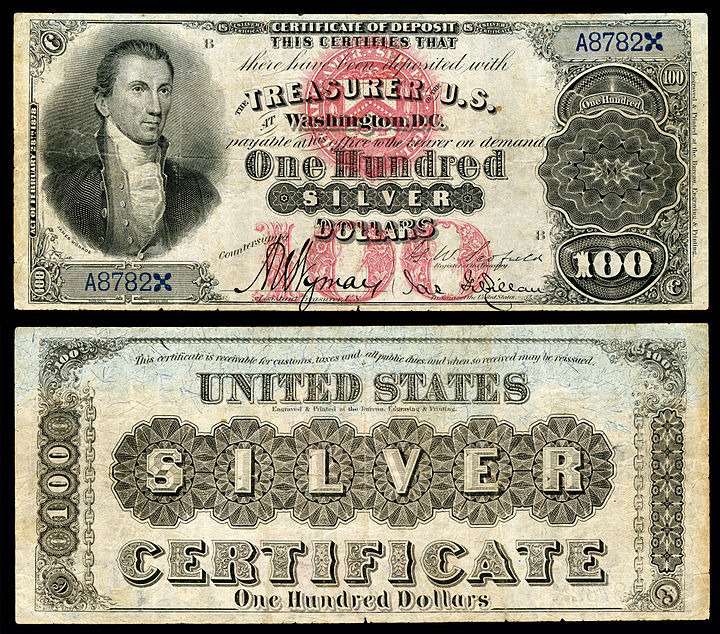 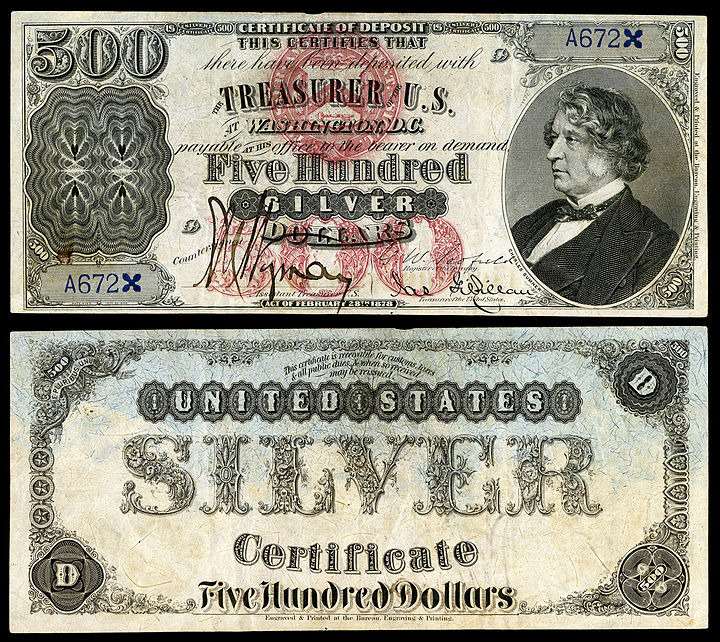 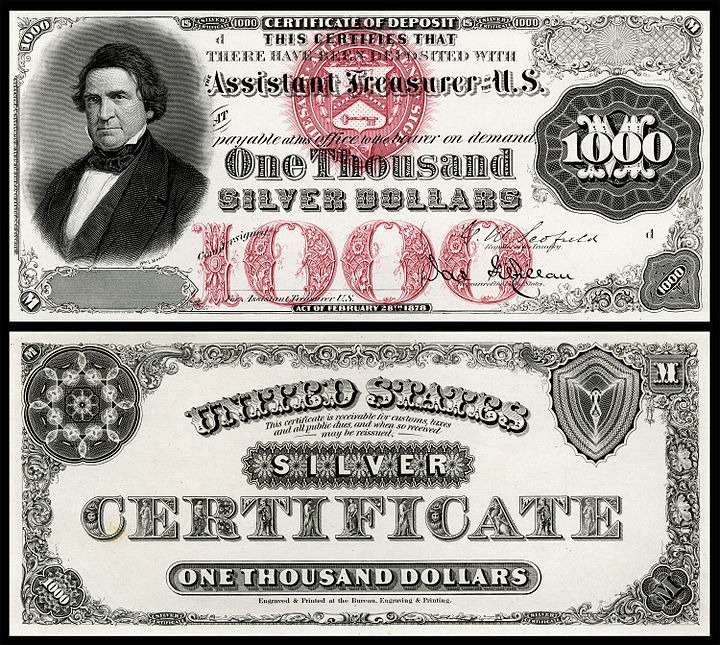 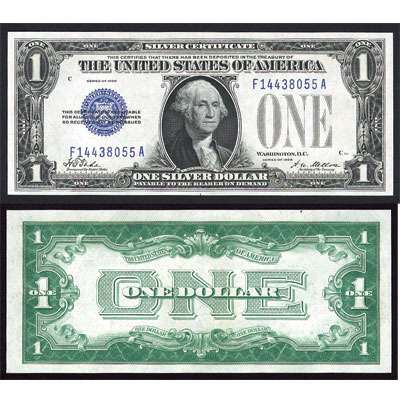 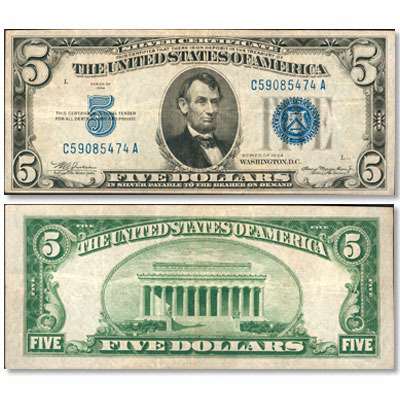 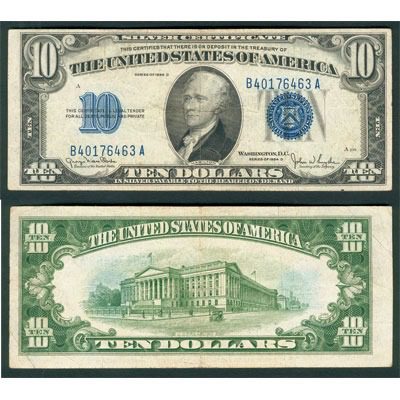 Even though Silver certificates circulated quite well, there were some series that were more popular than others. This popularity and abundance makes them quite easy to acquire today, reducing their value to collectors.

Silver certificates issued in 1935 and 1957 are the most common ones out there and also have the lowest values. One in excellent condition can sell for around $5 but the value can drop as low as $1.50 if it is in good condition.

$5 Silver certificates from 1934 and 1953 are also common, but not as much as the aforementioned ones. These former can fetch around $30 depending on its condition and demand.

There are series with fewer surviving certificates compared to others, increasing their rarity and value. These ones generally have the highest values outside of Star notes and notes with unique serial numbers.

The $1 Silver certificate Educational Note is an example of a rare and valuable. You can get around $500 for one in good condition and one in perfect condition will fetch you as much as $4500.

Even though the 1928 series had several common varieties, it also had some of the rarest ones. The 1928C, 1928D, and 1928E varieties are all rare and very valuable to collectors. A standard one in very fine condition can go for as much as $5000.

Another example is the 1899 Black Eagle $1 Silver Certificate. Although it is not as valuable as the previous examples, it still commands a decent price of around $110 in good condition. However, if you find one in perfect uncirculated condition, you can get around $1,300 for it.

A silver certificate dollar bill that was damaged during production would have a note issued as replacements. This replacement note carries a star in front of its serial number to indicate its status for consistency.

Just like standard Star Notes, these ones also have a higher value than regular Silver certificates. The reason is primarily because of their rarity, giving them a collectible status and increasing their demand among collectors.

While you can no longer redeem a silver certificate dollar bill for its worth in silver, you can get its face value in federal reserve notes. However, collectors value these certificates more than their face values and depending on some factors, regard some as more valuable than others.

Factors that Determine a Silver Certificate’s Worth

Collectors generally grade silver certificates on the Sheldon numerical scale. The scale initially worked for large cents but was later adjusted to handle any coin series. It ranges from 1 to 70, with the lowest representing basal state and the highest representing perfect mint state.

However, a more general and loose version classifies coins and certificates into six groups which we will cover below.

This grade depicts the worse condition a silver certificate dollar bill can have and still be sellable. You will observe wrinkles on the bill and some features might even be fading. However, you can still sell it so far crucial details like serial number, portrait, denomination, and date are still intact and visible to the naked eye.

A bill in this condition looks slightly better than one in the previous condition. While you should be able to observe wrinkles on the bill, its features and colour would be better preserved than one in good condition.

The bill is intact in its entirety but finer details and colors will indicate its age and exposure. Since most of the damage came from circulation and exchange, expect to see folds and wrinkles too.

Bills with signs of use and wear but clear major design features fall into this category. It is important to note that this condition loosely covers up to four different grades.

A silver certificate dollar bill in this condition retains all details from its production but lacks almost all of its original boldness and luster.

This condition ranges from the bill lacking vivid colors at certain points to retaining full luster. The lowest number (50) indicates the former, while the highest number (58) under this category indicates the latter.

You can regard this condition as the equivalent of a coin’s Mint State. It indicates that the bill has never been spent but instead been in storage. As such, the certificate maintains its crispiness, details, and color.

Generally, this grade has the most value outside of star notes and errors. Finding a rare one in this state will fetch decent to premium value depending on its number.

The presence or absence of a star in front of the bill will influence its value. One with the star is worth more mainly because of its uniqueness and rarity.

However, not all star notes are valuable because some belong to a common series, making them quite easy to find. Such star notes are worth even less compared to rare standard certificates.

Collectors regard these types of certificates as wonderful additions, thereby willing to pay more to acquire them.

Certian errors like folding and inking mistakes increase the worth of a silver certificate to collectors. The reason is that the error makes the bill unique, making it a worthy addition to a collection.

Apart from the bill’s grade, its rarity directly influences every other factors in this section and ultimately its worth. The reason is that a bill’s attribute and serial number only makes it valuable because it is not common.

This is why unique notes that exist in greater numbers are not as valuable as those in rarer series. You can refer to our section on rare and valuable silver certificates for examples of rare ones.

How Much is a Silver Certificate?

The following table depicts the prices at which various certificates have sold, including their conditions.

Best Way to Tell If a Silver Certificate is Original

It is important for you to be able to tell if a silver certificate is original or not to avoid paying for a fake. The best way is to have a professional appraiser take a look at it. However, the following tips will help you recognize some counterfeit bills.

Where to Sell Your Silver Certificate

The most popular options for selling silver certificates include local pawn shops, online platforms, and auctions. While the first option is fast and easily accessible, it generally yields the least value of the three.

Online platforms like eBay and Heritage Auctions allow you to list your silver certificate for sale. People from all the country can then bid on it, making it possible for you to get higher values depending on how much they want it.

The last option is the best for rare and valuable bills. Listing them at an auction is bound to fetch you the most value for your certificate.

As an alternative to carrying raw silver bullion about, silver certificates found real success in the American society. However, they can only be redeemed for their face value in federal reserve notes today.

Fortunately, collectors still find them more valuable than their face value, making it possible to get higher prices for them.