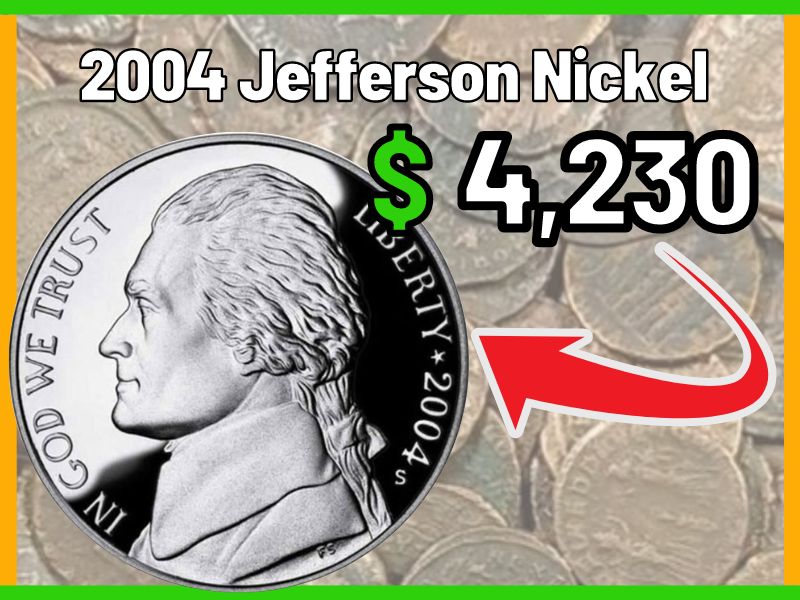 The Jefferson Nickels are five-cent coins that have been struck since 1938. It was used by the US mint to replace the Buffalo nickel. In 2004 the nickel experienced some changes. It provided an exciting variety for coin collectors, experts, and enthusiasts.

These coins are easy to find. They don’t really bring in premium profit. Still, all coin enthusiasts should be interested in knowing and understanding the value of these very beautiful nickels.

The Jefferson nickel of 2004 is only a member of nickels with a long and rich history. They all bear the face of Thomas Jefferson on their obverses. They are five-cent coins with varying degrees of difference depending on the decade or era. Like many American coins, the Jefferson nickel has had its own fair share of metamorphosis.

In 1938 the first Jefferson Nickel was struck by the US mint. It replaced the buffalo nickel which has been in existence since 1913.

The obverse or head of the nickel featured the profile of Thomas Jefferson, a founding father, and third US president. The design used was the one prepared by Felix Schlag, a German-born American sculptor.

It was with relief that the mint in 1938 moved to replace the Buffalo nickel, which was difficult to coin and was completing its 25-year term after which the mint quickly moved for a replacement. A competition was held to pick the best design. The rules required that Jefferson’s profile be on the obverse and the president’s house, Monticello, be on the reverse.

Several engravers and sculptors entered the competition, among them, Felix Schlag. Schlag won the competition but was required to make adjustments before the nickels went to production in October 1938.

The Lewis and Clark Expedition was a US expedition to cross the newly acquired western portion of the country after the Louisiana purchase. The men that led the crossing at the time in 1804 were captain Meriwether Lewis and second lieutenant William Clark.

Officials were apprehensive about removing Jefferson’s home from the reverse of the nickel. To make it easy they came up with legislation that allowed the mint to make the needed designs in 2003, 2004, and 2005. Then the old design with Monticello on the reverse would begin again in 2006.

The first of the coins featured an adaptation of the Indian Peace Medals. Engraver Norman E Normath designed this design. The second design featured a design by Alfred Maletsky which depicts a keelboat like the one used by the Lewis and Clark expedition.

The 2004 Jefferson Nickels featured the same composition as the original from 1938; 75% copper and 25% nickel. The Jefferson nickel continues to feature the major details on the obverse of the coin.

The Jeffers nickel will experience more changes in the following years. For example, the Monticello would be restored, and the face of Thomas Jefferson would be redesigned to fit more properly into a modern coin. None of this would take away from the iconic nature of the 2004 design which can be classified as commemorative nickels.

This nickel is one of the US coins with the most design details on it. Unlike the penny with scanty features, the nickel spots major and minor design shows. They are some of the most beautiful design features you can find on coins.

The obverse or head of the 2004 Jefferson nickel is simple enough in design. It shows the profile of Thomas Jefferson facing left. He is seen wearing his hair long as tied at the back. The letterings on the obverse are: IN GOD WE TRUST situated in front of the face, LIBERTY and the date 2004 are written behind Jefferson’s head. You will find the mint mark of the particular nickel behind Jefferson’s neck too if it’s a Denver or San Francisco nickel. 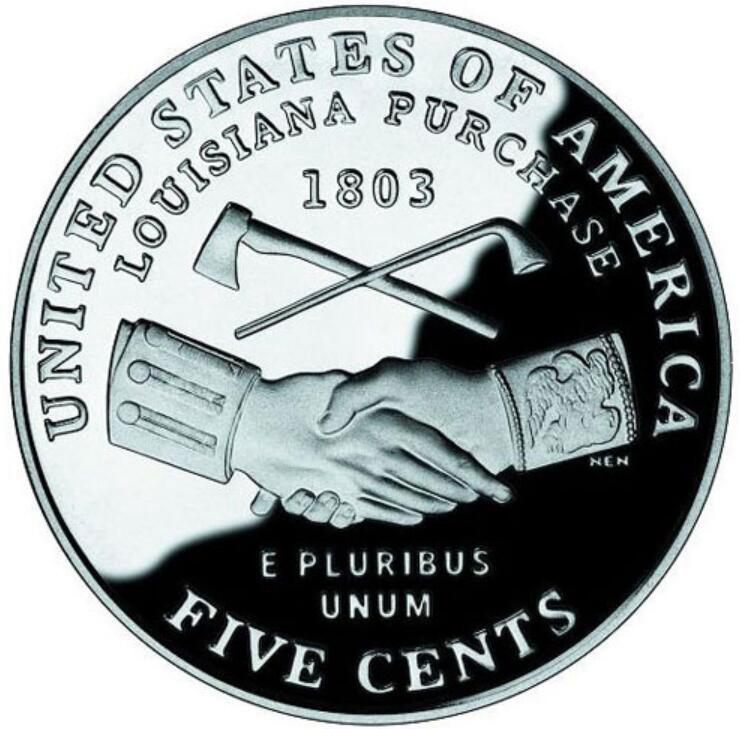 Where the obverse design shows a sparse use of artistry, the reverse of the 2004 Jefferson nickel features the best imagery and tells a historical tale. In the middle of the coin you’ll find the Peace Medal; the Louisiana Purchase and the peace Medal. This is a rendition of an original that first appeared in the 1801 Jefferson medal. It shows a clasping hand that signifies peace and friendship. The letterings are “UNITED STATES OF AMERICA,” “LOUISIANA PURCHASE,” “1803,” “E PLURIBUS UNUM and FIVE CENTS.”

Reverse of The Keelboat 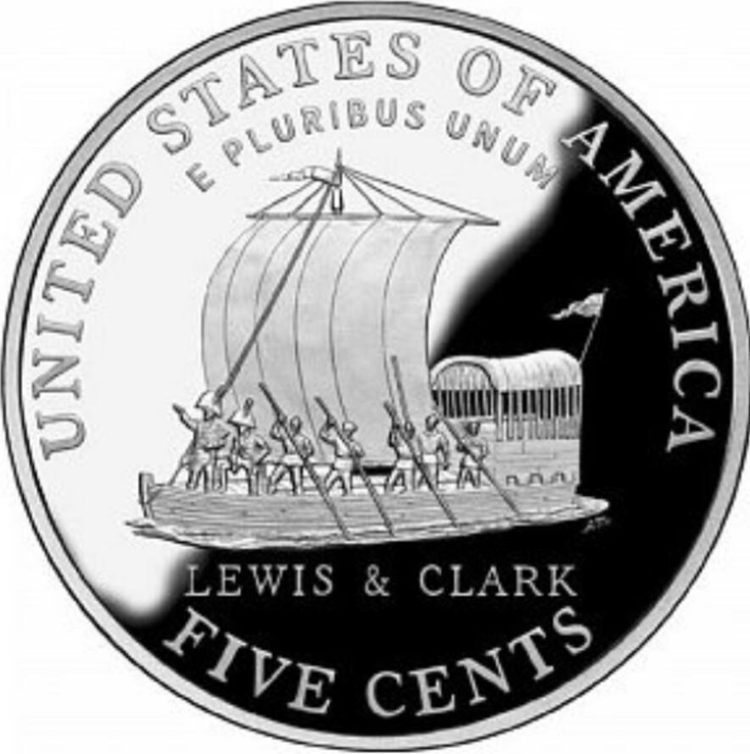 The keelboat reverse also tells its own story. The reverse shows the keelboat in full sail. This boat transported the expedition through the rivers of the Louisiana territory as they searched for passage into the Pacific Ocean.

The boat is 55 feet, a multipurpose boat that can be rowed, sailed, poled like a raft, and towed from the river bank. Here on the coin, you can see the angled image of the boat with its riders on it.

Under it are the names LEWIS & CLARK, FIVE CENTS. The letterings UNITED STATES OF AMERICA and E PLURIBUS UNUM are at the top of the boat.

The US minting facilities were hard at work in the year 2004 to bring the iconic Jefferson Nickels to the public. The three mints were: the Philadelphia, Denver, and San Francisco facilities. A total of more than 1 billion nickels made it out of those three mints in that year. To better understand the series and mintage, we will show them in two parts: peace Medals and keelboat nickels. 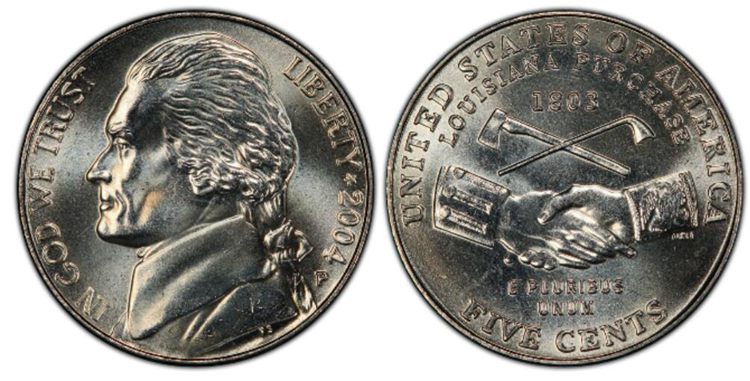 The above Jefferson nickel was born in the Philadelphia facility. It is both the obverse and reverse of the five-cent bearing the medal of peace that sealed the Louisiana purchase. The Philadelphia mint made 361,440,000 of them.

The Denver mint produced its own peace Medal coins using the same designs too. They created them all with a mark to show their origin. A total of 372,000,000 Jefferson Nickels were produced in the Denver mint.

Peace Medals came out of the San Francisco mint as well. The facility produced the least of the three mints. It made 2,992,069 Jefferson Nickels. Coins from the facility usually carried marks S. These were not regular strike coins but what numismatic experts call proof coins. They were made in sets and sold to collectors.

Next are the keelboat nickels that each of the mints participated in producing.

The Philadelphia mint made the nickel with the keelboat design in millions. A total of 366,720,000 Jefferson nickels were struck in 2004. They featured the keelboat on the reverse and the letterings.

Along with making the peace Medals the Denver mint set out to produce millions of nickels worth the keelboat on the reverse. In 2004, 344,880,000 nickels were produced. Denver nickels had the D mark on them.

Keelboat nickels from the San Francisco mint were all-proof coins; shiny, bright, and mirror-like quality. The mint made 2,965,422 of the Jefferson Nickels for the benefit of collectors.

To determine the value of your 2004 Jefferson Nickel, you have to begin by grading it for good condition. Collectors and buyers in general are interested in a coin that’s as close to the mint condition as possible.

This is what determines the value and how much profit you can get from selling your nickel. Your coin can be in good condition but you never know if that condition makes it worth money until a grading company like NGC or PCGS grades it. So how do they do it?

Below is an idea of how coins are graded. 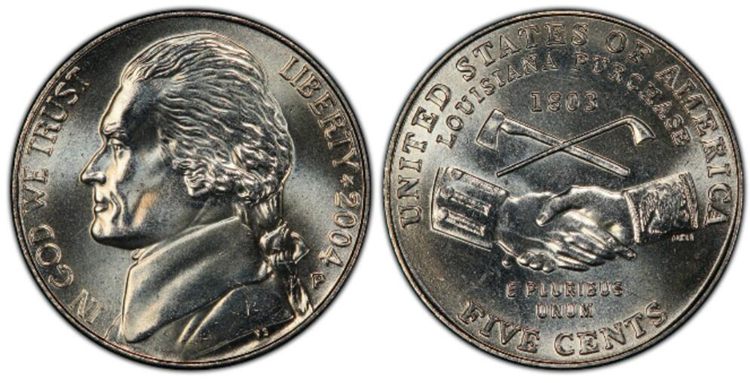 Even though this nickel was produced in such a large quality in 2004 by the Philadelphia mint it has done well in sales when highly graded. In 2016 a 2004 Jefferson nickel peace Medal graded MS 68 sold for $4,230.

If you have this piece of gems then you should check out that chart below for real sales which proves your nickels can make good sales too.

More than 300 million of this nickel was made in the Denver mint. They were all marked D on the obverse. The D Peace Medal has a record sale of $900 of a nickel-graded MS 68.

The 2004 Jefferson nickel marked S is a proof coin. As you can see from the above picture the coins show high quality and high luster. A 2004 S Jefferson Nickel graded PR 70 once sold for $1,725. Below is a chart showing more sales of the S Jefferson Nickel.

The 2004 Jefferson Nickel keelboat series made in Denver was produced up to the tune of more than 300 million. A coin graded MS 68 was sold for $940 in 2016. Check out more in the chart below.

The San Francisco mint made more than 2 million proof coins of the keelboat nickels in 2004. In 2013 a proof coin graded PR 70 was sold for $270. Below are sales of more proof coins.

Where To Sell Your 2004 Jefferson Nickel Series

The Jefferson nickel here discussed is a very interesting coin. Having acquainted yourself with the 2004 Jefferson nickel series you want to try out the value of your graded coin by selling. If you wonder where to sell them, here are the top 5 places.

Auctions bring experts and collectors together. These people are usually on the lookout for the next best coin to buy. They are ready to pay for coins that are graded and in great condition.

Other offline places to sell your coin includes

This article has shown in detail how much your 2004 Jefferson Nickel Series can be worth. Take your time to understand how the coins are graded. It is important to not rush into selling your coin, especially if your coin is highly graded. Coins can be a great investment. First, read all you can about the Jefferson nickels before making such investments. Once you get a grip on the several series and how to identify them, you are good to go.