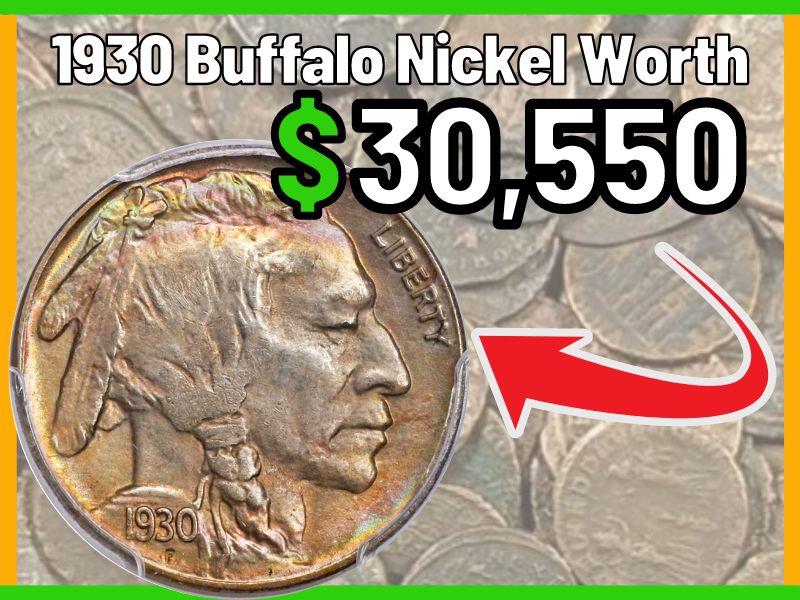 A 1930 Buffalo Nickel is worth about $1.45 in good condition. However, one with an MS 63 grade can fetch as much as $135 because of its excellent condition. It is important to note that these figures aren’t fixed as other factors play vital roles in determining the coin’s value.

Buffalo nickels have always been popular among collectors, and even when they were in circulation, people spent the coin more than others at the time. With its relatively low value, you will find it less challenging to acquire common ones initially.

As opposed to its name, the Buffalo nickel comprises 75% copper and 25% nickel. The series started in 1913 and continued till it was replaced 25 years later by the Jefferson series in 1938.

While the coins remain an excellent blend of beauty and finesse, they were known to wear quickly.

The Buffalo nickel story started when President Theodore Roosevelt expressed concern about the unappealing state of US coins in 1904. He took steps to hire Augustus Saint-Gaudens to redesign all the existing coins in circulation.

However, Saint-Gaudens only redesigned the cent and the four-gold pieces for the US Mint because of the 1890 act. This act states that coins can only be redesigned after 25 years of circulation, except by Congress’ authorization.

When these redesigned coins went into circulation, the Liberty nickel had already exceeded the 25-year condition and was eligible for a redesign. Frank Leach, the Mint Director in 1909, started taking steps toward new designs for the nickel.

He instructed the then Chief Engraver, Charles Barber, to create models for new nickels. However, the project stopped when he handed over as the Mind Director to Abram Andrew. Andrew expressed dissatisfaction with the new Lincoln set and sought to use James Earle Fraser’s designs.

Fraser already had some concepts for the new nickel when the Mint started seeking new designs. At first, his submissions featured Abraham Lincoln, but he later came up with one featuring an Indian head and a  bison, hence the inception of the Buffalo Nickel.

This coin belongs to the Buffalo series and was struck in 1930. Two Mints were responsible for striking the 1930 Buffalo Nickel, and they were the Philadelphia and San Fransisco mints. Although the coin’s series maintained high mintage until its replacement, the 1930 editions had low mintage.

The main reason was the Great Depression, but numismatists believe other factors could have contributed to that. Regardless of its mintage, the 1930 Buffalo Nickel is quite known for having many weak strikes that made it wear faster.

This is why collectors value the ones with strong strikes more, as they tend to retain features longer.

The 1930 Buffalo nickel has the same features as the other editions in the series. Its only difference is the year of production, which you can find on the coin’s obverse.

A right-facing Indian head dominates the coin’s obverse, with the year of production struck on the Indian’s shoulder. You will also see the word “LIBERTY” struck in front of the head, along the coin’s edge.

You will find the left-side profile of a bison in the coin’s center with the “UNITED STATES OF AMERICA” struck along the coin’s top. The Mint’s famous motto “E PLURIBUS UNUM” was struck on the right area above the bison’s back and below the coin’s top.

As we mentioned earlier, the Philadelphia and San Fransisco mints struck the 1930 Buffalo Nickel. Both Mints didn’t strike up to 29 million of these coins, recording one of the lowest mintage of the entire series. 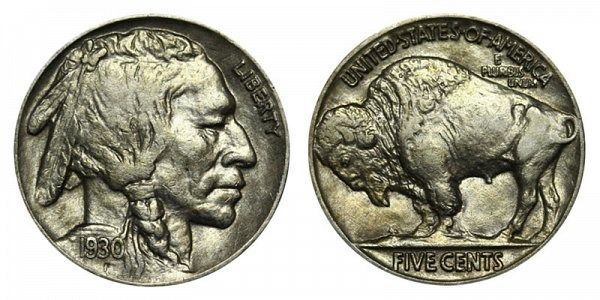 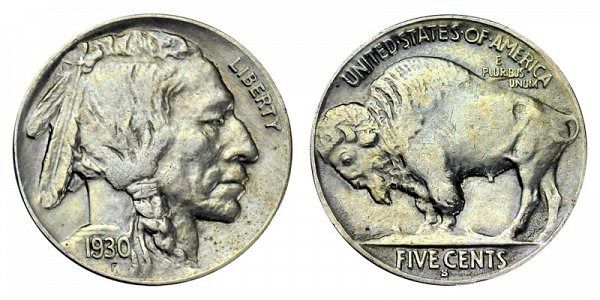 On the other hand, the San Fransisco Mint struck only 5,435,000 Buffalo nickels. They all have the “S” mint mark on their reverse. With such low mintage, 1930 Buffalo nickels struck at this facility should have higher values because they are less common than the ones with no mint mark.

Nevertheless, this figure doesn’t look like much compared to the mintage for Buffalo nickels of other production years. One would naturally expect the 1930 nickels to be less common in circulation than the others.

The Great Depression played a massive role in the low production of the 1930 Buffalo nickel and ultimately its low circulation and spending. At the time of its production, the American society was already a year into what would become the worst economic meltdown in the world.

As a result, the larger population of Americans was becoming jobless and left with no other source of income. People started experiencing a steady reduction in spending power, reducing the rate at which money circulated.

Since several denominations were circulating, as usual, production began dropping because of the excess. This was the main reason there was low mintage, foremost of the nickels struck from 1930 to 1939.

A year into the rising economic crisis, the Buffalo nickels started showing signs of weak strikes. This might have been because of the Mints’ limited access to adequate resources. However, while a lower percentage maintained strong strikes, the weaker ones were quite common.

Coin collectors have placed higher value and demand on the 1930 Buffalo nickels with strong strikes. The reason is that coins with weaker strikes are more susceptible to wear. All the available nickels with weak strikes no longer have as much appeal and have their features significantly worn.

Based on this, one would expect 1930 Buffalo nickels with strong strikes to be rarer than the ones with weak strikes. The reason is because of lesser numbers and higher demands among collectors.

Although theoretical values exist to place a worth on the coin, its worth depends on several factors. This is why there is no fixed price for each nickel.

These factors can either increase or decrease your coin’s value.

A coin’s grade remains the most crucial factor when determining its worth or value. It indicates a coin’s level of preservation and eye appeal, directly influencing its value. Collectors loosely classify coins into four (4) grades.

This condition cover grades that indicate heavy wear and even discoloration on coins. Some collectors perceive it as the worst state a coin can be in and still be sellable. Coins that fall in this generally have the lowest values as they have lost significant parts of their eye appeal and features that make them valuable.

Note that most weak strikes will probably fall in this section or the next one.

Coins in fine condition show lesser wear, discoloration, or scratches compared to the previous condition. While you can still observe the damage with the naked eye, they retain more details, adding to their value.

Collectors generally perceive this condition as the finest a coin can have in circulated state. This means it indicates coins that manage to retain impressive feature details and eye appeal even though they have been spent.

Although some simply weren’t exchanged as often as others, putting them in this category since they have little signs of damage.

This condition means the coin has never been circulated, spent, or exchanged. Grades like MS (Mint State) and PR (proof) fall in this category.

This refers to how common a coin is, and in this case, the 1930 Buffalo nickel’s relatively low mintage contributes to its rarity. However, it is pretty easy to acquire, reducing its value among collectors.

Generally, the rarer a coin is, the higher its value because it indicates that it is highly sought after.

Just like the previous factor, the more the demand for a coin, the higher its value and worth. It is important to note that higher demands usually accompany coins with low mintage and high rarity.

Certain errors rarely occur in minted coins, and some unique ones significantly increase the coin’s value. Among some others, a popular unique error for a Buffalo nickel is the 1937 D 3-legged error.

These errors add to the worth because coins that have them are pretty rare to come by.

1930 Buffalo nickel prices have shown that you can sell them for way more than the value several people attach to them. While this might be because of several reasons, which we will address soon, it is still an encouraging development.

We believe the difference in value between the San Fransisco coins and Philadelphia ones is mainly because of the low mintage of the former. It makes surviving coins in excellent conditions and strong strikes quite rare.

5 Most Valuable 1930 Buffalo Nickel Ever Sold 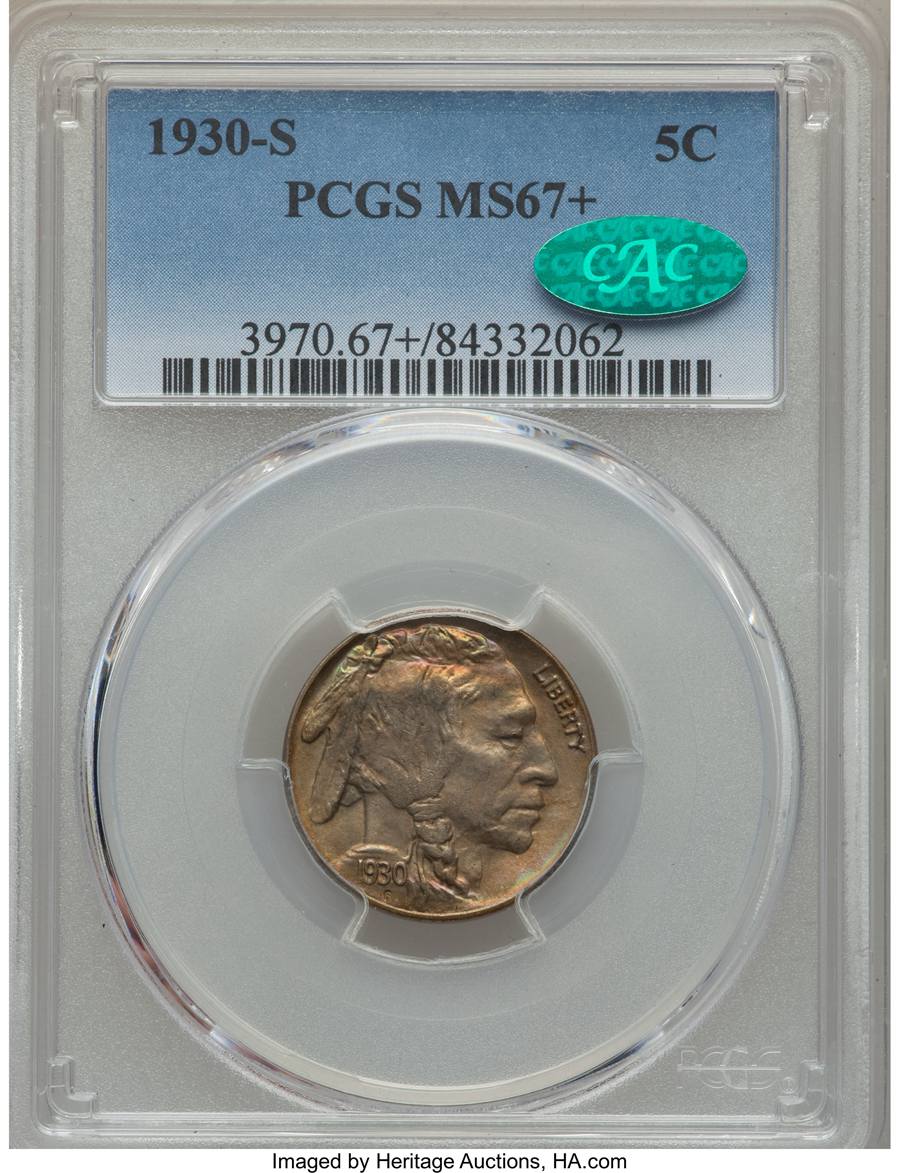 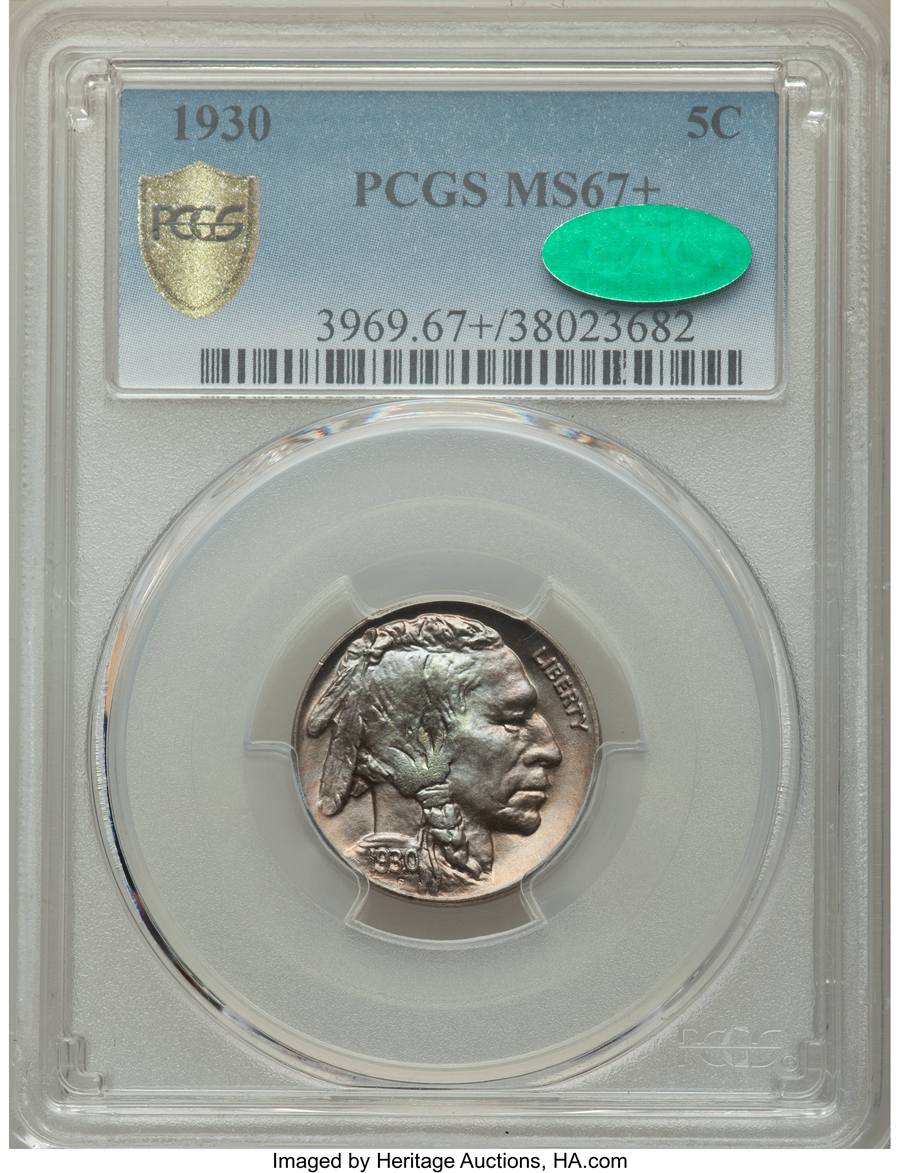 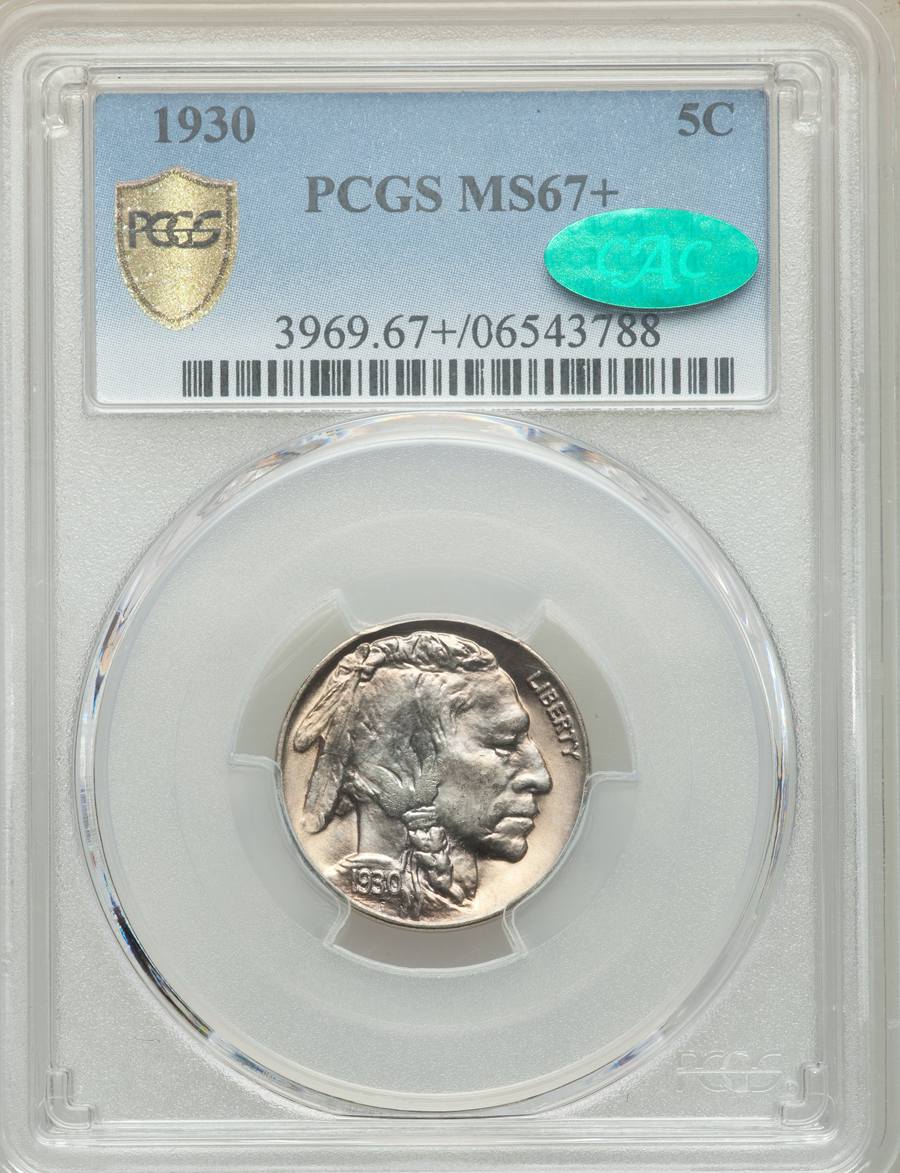 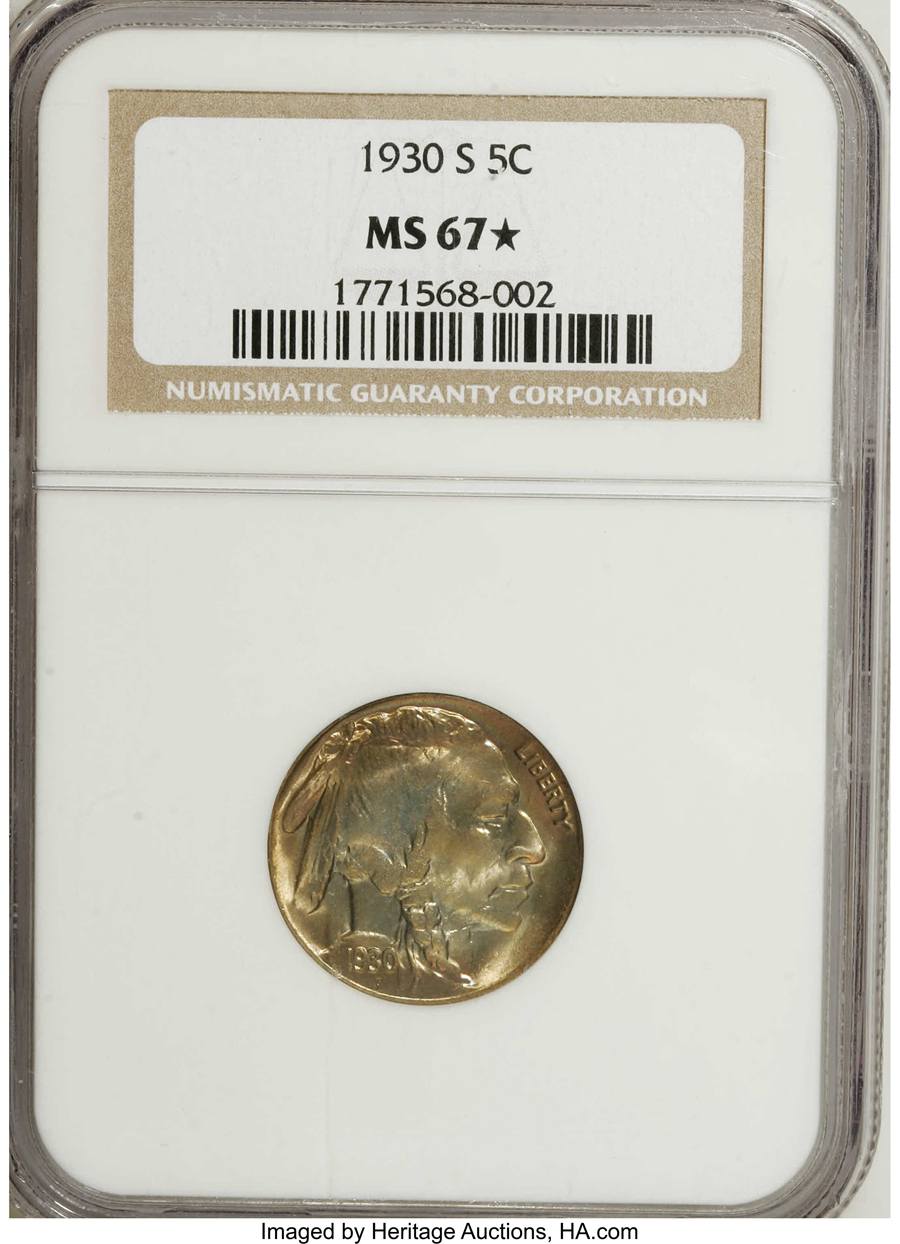 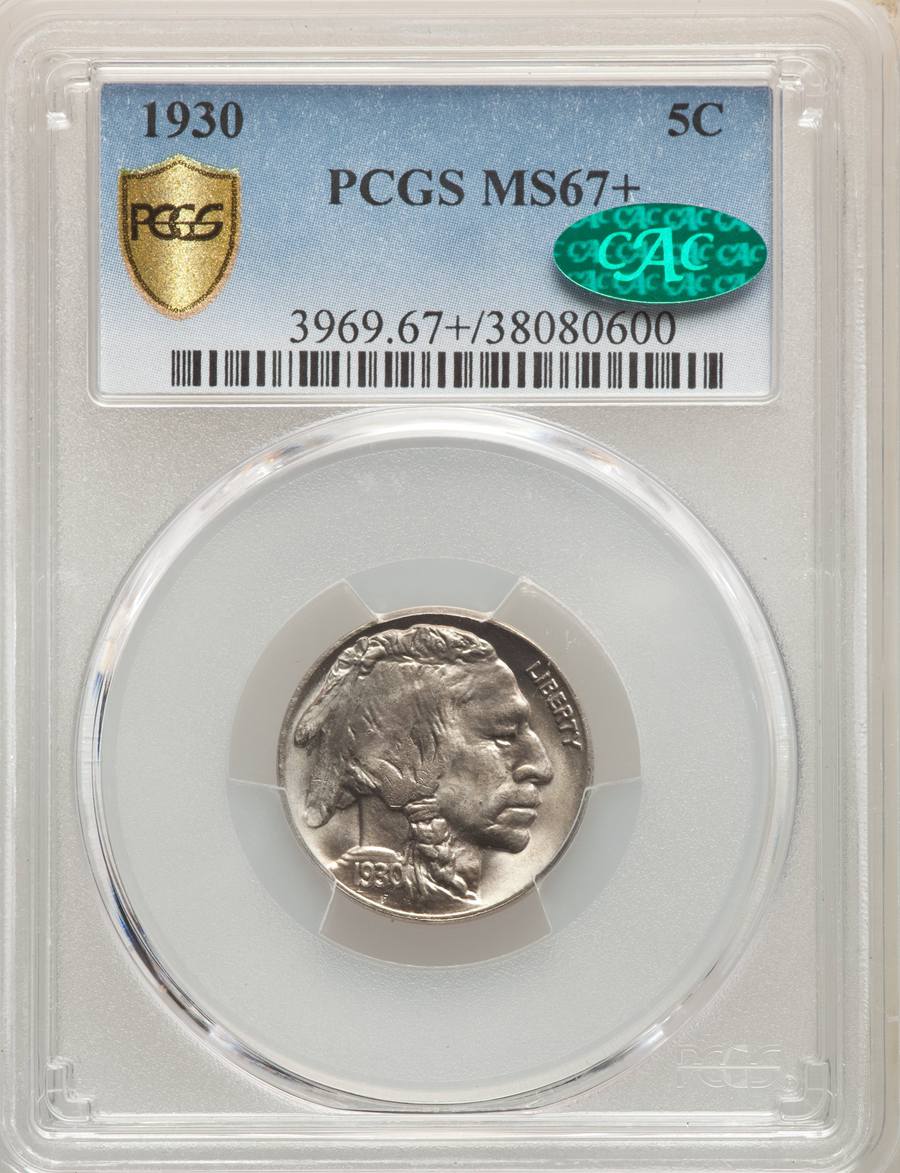 Where to Sell Your 1930 Buffalo Nickel

Your choice of where to sell can go a long way in fetching more value for your coin. While some are more convenient, they potentially yield less than the other options.

These are easily accessible options, especially if you want some quick cash. Most people go for them when it comes to low-value coins since the price difference can be negligible. Another advantage is that some can grade your coin for free too.

However, be prepared because there is a chance you will get less than you would typically get online. That’s why we recommend only selling low-value coins to these outlets.

Selling your coin at auctions or on online platforms lets several people bid on it. This increases the chances of fetching more value since the coin would go to the highest bidder.

Websites like Heritage Auctions and eBay are good choices for you. However, remember to grade your coin beforehand and state it in its description. This will increase the potential for fetching more value for your coin.

Although it has a bison profile, not a buffalo, and has a higher copper content than nickel, this series adopted the name, Buffalo Nickel. Apart from its eye appeal, it also represents how far the United States has come in overcoming one of the worst economic meltdowns in history.

The 1930 Buffalo Nickel is a worthy addition to your collection.