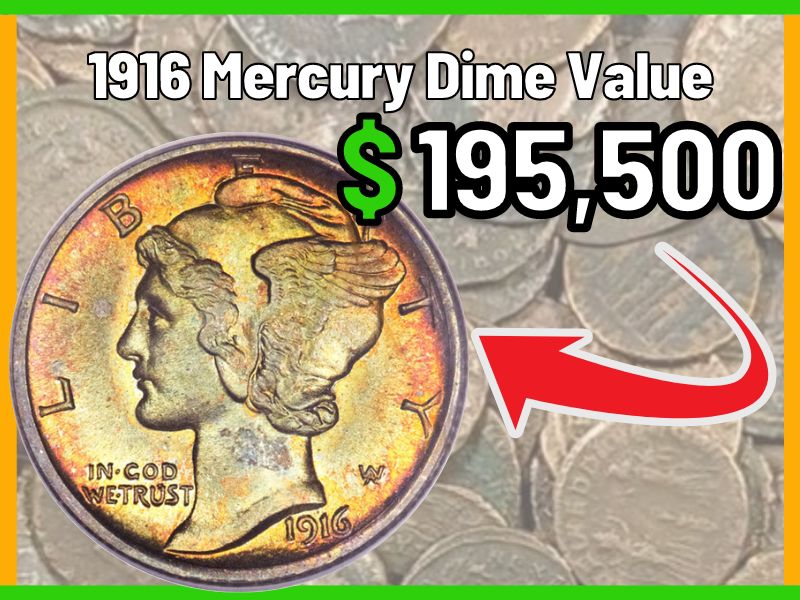 Further, the prices can vary depending on whether the coin has a mint mark on the reverse or not. And note that these dimes are also valued high on account of the amount of silver, and even higher for numismatic reasons.

The 1916 dime of any series is one of the US most valuable and sought-after coins. Dealers and collectors love it. If you stumble upon this coin in good numbers, and you are curious as to its value, you should read this article to find out how much the 1916 dime is worth.

This article will also provide information on grading practices which is a very important part of getting a good deal on your coin. 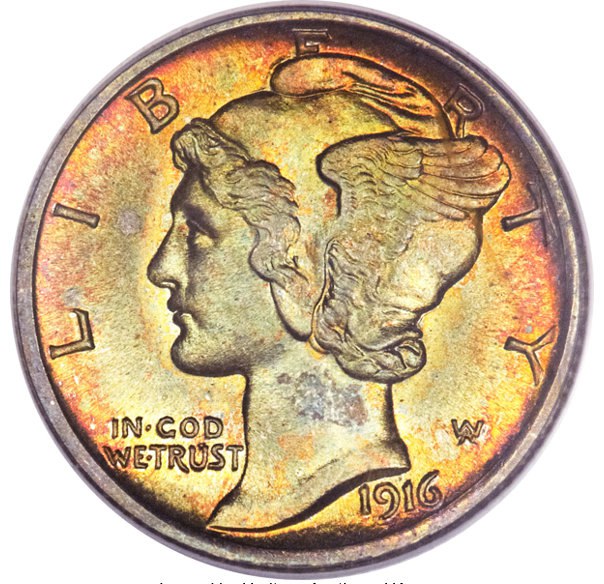 Considering that these dimes were produced more than a hundred years ago, they are now some of the most prized dimes in existence. They were produced in all three factories—Philadelphia, Denver, and San Francisco mints.

One of the curious things about any coin is that their values rise when they have errors but they are valued low when they are too worn. Hence, two types of man-made imperfections result in different price extremities. Now take a dive into the history of this dime.

The dime is a coin with a $0.10 value made for spending by the government in 1916. It was authorized by the 1792 Coinage Act. This coin is the smallest and less thickest coin in the community of American coins.

The dime is a word from old French that means tenth, hence,10 cents. Before 1916 there were other dimes with different designs like the 1796 dime which featured the Draped Bust and the 1837 Liberty Seated dime which had less silver than the 1916 dime.

The 1916 dime, also called the Winged Liberty Head Dime was designed by Adolph Alexander Weinman, a sculptor, and student of Augustus Saint-Gaudens. It is generally agreed that the woman after whom Weinman modeled the bust on the obverse of the 1916 dime was Elsie Kachel Stevens, the wife of a poet named Wallace Stevens.

The coin is called mercury dime because many thought the image on the obverse is that of the Roman god Mercury. It is rather the image of the goddess Liberty. The woman wears a Phrygian cap that represents liberty and freedom. The wings in the cap represent freedom of thought.

It took a 1915 competition to arrive at the design of the obverse of the 1916 dime. Sculptor Weinman competed against two other designers and eventually, he was contracted to do the job.

The 1916 dime is popularly thought of as the most beautiful American coin. As time went on though we lost most of the silver dimes. Thousands of Mercury dimes were melted in the 1980s during the silver run-up. For this reason, the 1916 mercury dime remains one of the most valuable silver coins in the history of US coins. Consider this one that was graded MS 68 and sold for $14,687.50 by Legend Rare Coin Agency.

The dimes with the D mark are now very few in existence due to public hoarding at a time when silver became highly sought after.

The composition of the mercury dime was a carryover of what was obtainable in the Barber dime, that is, the 90% silver and 10% copper. The coin is perhaps the only American with a design rooted in Etruscan civilization because the bundle of rods on the reverse with the ax is an Italian symbol.

Benito Mussolini would later use this symbol as well for his fascist party. It is important to note that there are reports that some 1916 dimes made in Philadelphia have had D added to them. 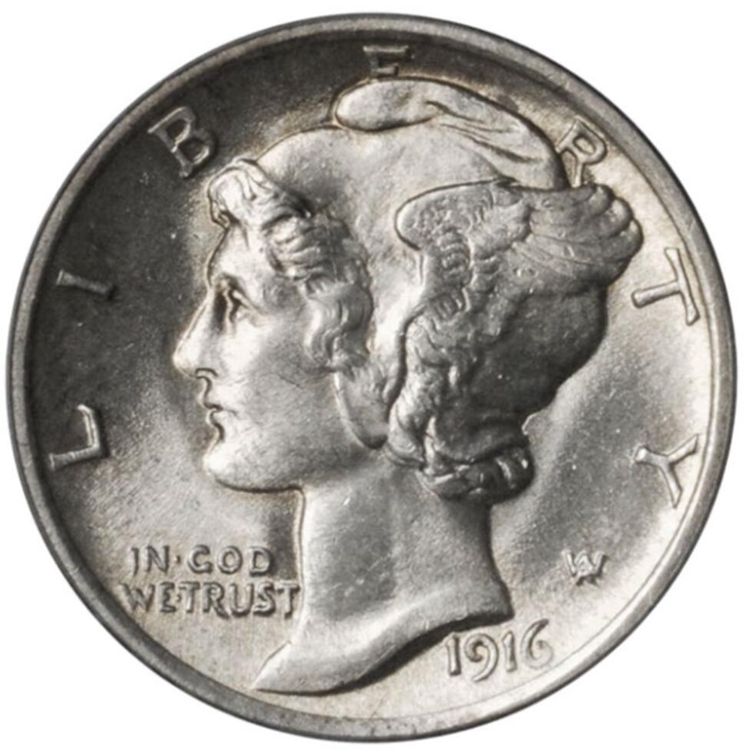 The obverse of the mercury dime features the bust of the young lady Liberty wearing a winged cap rooted in mythology that symbolizes freedom of thought. There are letterings on it too. The word LIBERTY rings the border of the coin over lady liberty’s head. Under her chin is written IN GOD WE TRUST. And under her neck the date 1916. It was an iconic dime because it came at a time when the world was at war fighting world war one. You will spot the initials of designer Adolph Alexander Weinman (WN). 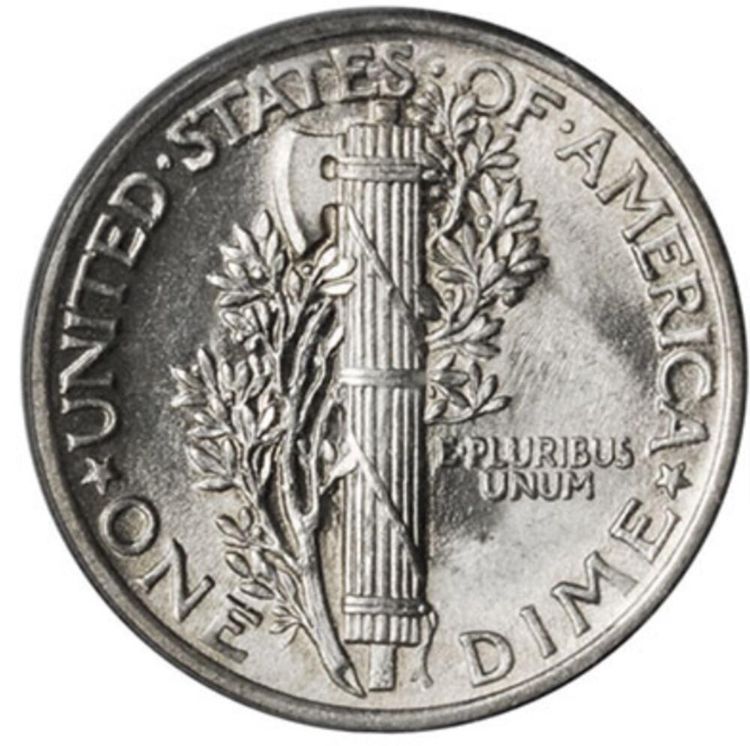 The reverse features the iconic band of rods and axe rooted in Spanish tradition. There are 7 pieces of rods in the band and one ax attached called the fasces and olive branches curve around the bunch of rods. Letterings curve around the circumference of the coin. At the top is UNITED STATES OF AMERICA and below are the words ONE DIME. To the right of the fasces are the small letterings, E PLURIBUS UNUM, which means OUT OF MANY, ONE.

And of course the dime comes with a reeded edge further enhancing the very fine look of the coin. Both sides of the coin were designed by the same man, Adolph Alexander Weinman.

The 1916 Mercury Dime was first minted in 1916 which began the series that would continue to 1945. After this dime came its successor, the Roosevelt Dime which would begin its own life in 1946. From then on the dimes would undergo newer and modern designs.

The three coin manufacturing factories participated in the minting of the 1916 dime — the Philadelphia, San Francisco and Denver mints.

The Philadelphia mint is the most popular mint in the US. It minted 22,180,080 of the dime in that year. This was the highest of the minting. The dimes from here didn’t have mint marks of P which was a tradition peculiar to the Philadelphia factory. If you have 1916 dime without a mint mark on the reverse then what you have is a Philadelphia coin. There are plenty of these coins which makes them not so valuable.

This is the rarest of the series of dimes from that year of 1916. The Denver mint is the second most popular mint in the US and in that year it produced 264,000 pieces of the dime. At this time in the history of coin collecting, people haven’t begun to attach any sentimental value to coins with mint marks so many of the D dimes reached the population entering circulation.

This was the third factory that produced coins for the country. Here 10,450,000 dimes were produced making this the second largest number of dime production in 1916.  The dimes from Philadelphia and San Francisco are both common in all grades.

Coins are either worth their face value—that is, the value of the metal they are made of—or they are numismatically valuable. At any rate, the value is based on the condition of the coin. You can just take a gander at any old coin and compare with the newer coins in your possession and you’d notice the difference in preservation and luster.

One has likely lost most of its shine and the other still looks new, all the features are clear to see. Furthermore, the condition of a coin varies degrees. This degree of newness determines the value of your dime.

You have the opportunity to think like an expert coin evaluator if you know the rules and metrics used for grading coins. This helps you determine to an extent how valuable your dime is even before you hand it over to experts to take a look at it.

Below is how to perform this very important part of coin valuation. Coins are either:

Conditions are further broken down to: 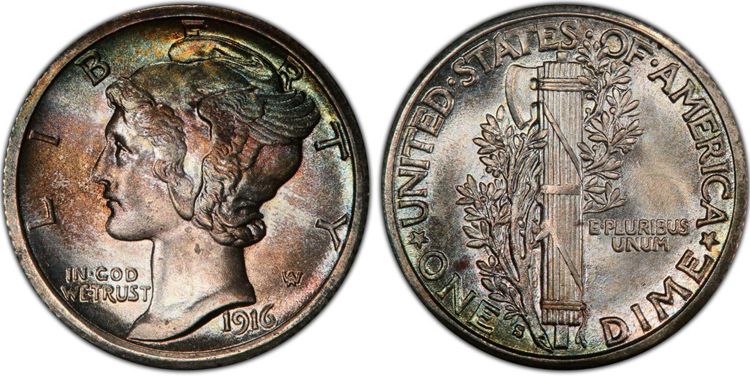 As already shown the dime minted in Philadelphia can be worth $4 in uncirculated condition and $25 in mint state. Let this not stop you from valuing your coin higher if you have them graded, as the table below shows.

The Mercury dime was first minted in 1916, and the first year of issue is widely collected. Many were saved as it was the first year of issue, so this date is available in all grades. Uncirculated examples are not rare, but are of course rarer than the 1934-1945 late dates. Gem MS65 examples are more available than any other pre-1934 Mercury dime.

The 1916-D Mercury dime is a key date in 20th century numismatics. This dime marked with a D for Denver is worth $1,713 in average condition. It can be worth between $14,965 and $31,775 in uncirculated mint condition. Below are the prices your coin goes for as well.

The 1916-D is rare in mint state and very rare in Gem condition. It typically has a sharp strike and it is estimated by PCGS that 80% or more of the survivors have fully struck crossbars. Luster is usually modest. Many examples have some degree of toning.

Next is the dime that was manufactured in the Denver mint. This dime with the S mark is worth $6.02 in average condition and $48 to $246 in mint condition. For more perspective consult the table below.

The 1916-S is fairly available in circulated grades. In mint state it is scarce, but usually available for a price. In mint state condition, fully struck examples are rarer than weakly struck ones. Mercury dimes minted in 1916 have a unique quality: the strike is weakest at the lower diagonal band, not the center crossbands. The luster can be satiny or white frosty, and toning is not unusual.

Where To Sell Your Old Coins

Selling anything has never been as easy as it is today. People can now sell whatever they want absolutely anywhere they choose to. After reading this article you probably feel confident about your 1916 dime now and feel like you are ready to deal.

You have an option either to sell offline, in which case you can meet your buyer physically in your locality or online in  which case you’d be mailing the coins to them. You need to determine which option suits your circumstances the most.

The places where you can sell your dime include the following places:

If you have an auction place in your neighborhood it is one of the best places to sell your coin. You will meet dealers and collectors at auctions. You will also likely meet experts who grade coins too. A graded coin does better at sales.

If you prefer one on one transactions, a pawnshop is the best place for you. The sale is also likely to be faster than at an auction.

This can either be one you set up by yourself or one by your neighbor. If you have quite a number of 1916 dimes you could organize your own yard sale. The sale is faster too.

Online places to sell your coin:

The above online places offer a great opportunity to get the best prices for your coin. PCGS offers grading services. eBay offers a flexible selling expert like a real auction because people bid for your coin.

Now that you know everything you need to know about the 1916 Mercury Dime, it is time to apply everything you’ve learned. It is important that you have your dime graded before you sell. One of the benefits of grading your coin is that you get the closest to the worth of your coin. Finally, you don’t have to be under compulsion to sell off your dimes. Collecting is also an interesting and exciting hobby.