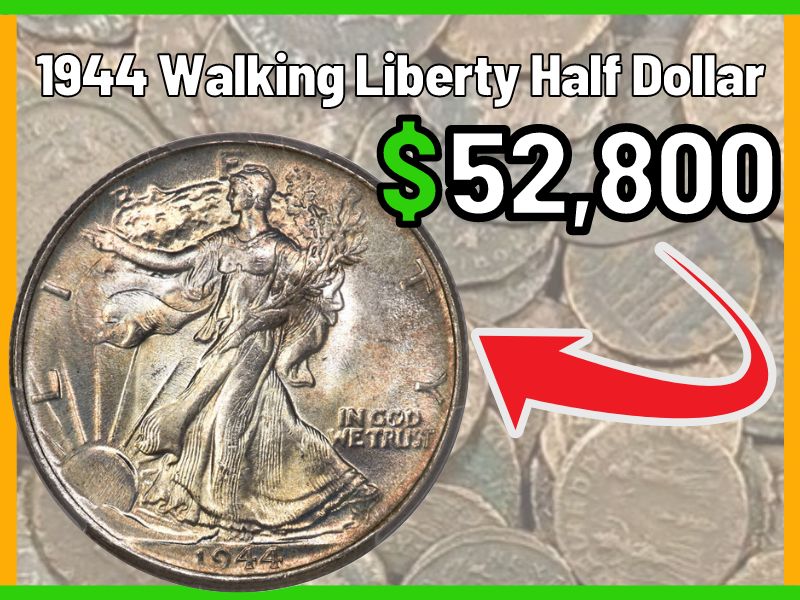 If you have a 1944 Walking Liberty half-dollar and want to know how much it is worth, you will have to do some research. The value will depend on the specific grade assigned by a knowledgeable coin appraiser. Other factors that influence the value include minting year and mint mark.

Since the US Mint began releasing Walking Liberty half dollars in 1916, collectors have shown a strong interest in these coins.

Most Valuable 1944 Walking Liberty Half Dollar 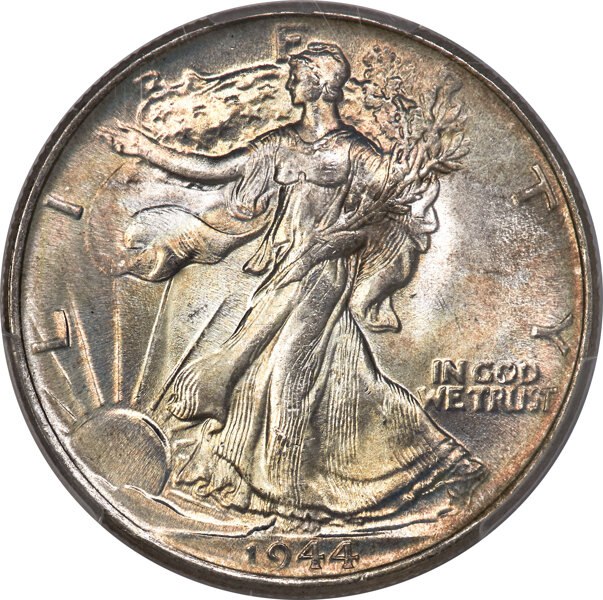 In 1944, the US Mint produced one of the most in-demand coins in history. Pictured on its face was Lady Liberty. The Walking Liberty half dollar is a silver coin that was used as legal tender by the United States Mint from 1916 to 1947. It was designed by Adolph A. Weinman, a well-known sculptor, and engraver.

While the 1944 half dollar value is low, particularly for low-grade coins in average condition, coins in excellent condition are quite expensive. In the course of this guide, we’ll be sharing top-notch information that would be useful to you. So, before asking; how much is a 1944 half dollar worth? Be sure to read till the end.

In 1915, Mint Director Robert W. Woolley came to believe that he was legally required to replace coin designs after 25 years. Thus, he began replacing the Barber coinage: dimes, quarters, and half dollars bearing similar designs by long-time Mint Engraver Charles E. Barber, and first struck in 1892.

Woolley had the Commission of Fine Arts conduct a competition to design the dime and half dollar. Weinman was ultimately selected to do the work.

The design of Liberty striding toward the Sun that Adolph Weinman made for the half dollar proved difficult to perfect, so Treasury Secretary William G. McAdoo considered having Barber create his own design.

Mint officials eventually acquiesced to Weinman’s design, which never struck very well—perhaps a factor in its replacement by the Franklin half dollar beginning in 1948. Nevertheless, art historians have considered the piece among the most beautiful US coins.

The 1944 Half Dollar was struck in three mints in the United States and there were; Philadelphia, Denver, and San Francisco mint with over 40 million coins struck across all mints.

The coin’s composition is a win-win for coin collectors, it is made of 90% Silver and 10% copper, which gives the coin good value even in the lowest of grades. The Half Dollar has one of the highest melt values of all U.S coins.

This coin one is the most beautiful representation of American value. So, this is how it works; In the best-case scenario, there would be three different artists, each responsible for a designated coin. These artists would end up with six submissions: obverse and reverse designs for the dime, quarter and half dollar. 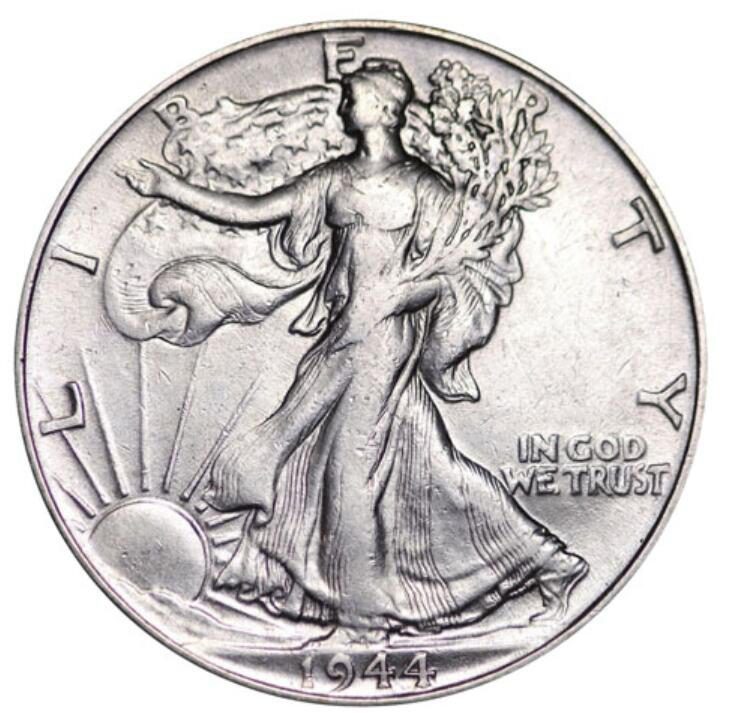 The obverse design depicts a woman—Liberty—walking toward the sun, which symbolizes a new day and great hope. She holds olive branches in her hands, which are symbols of civil and military glory. You might notice how her hand is stretched out—Weinman did that on purpose to represent the intangible spirit of freedom. 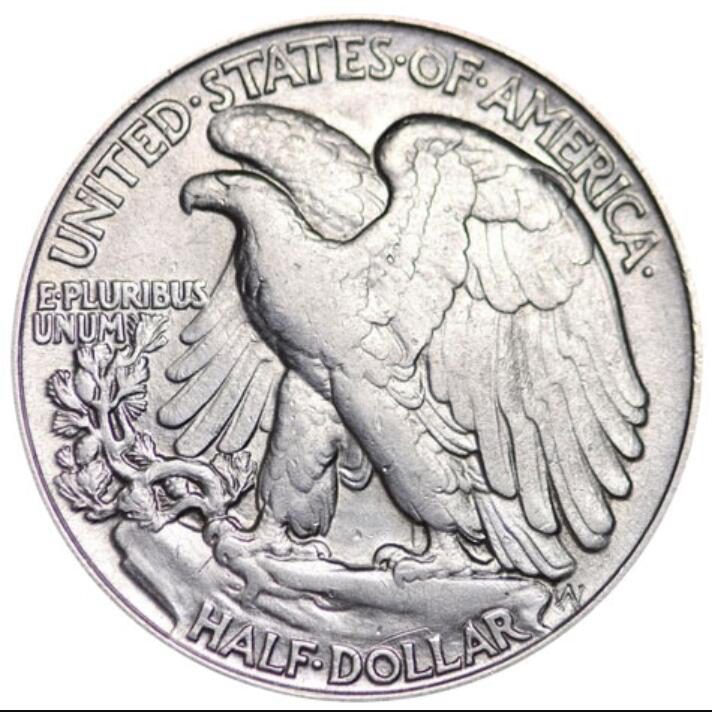 The reverse of the coin depicts a bald eagle perched on a rock with its wings spread, which symbolizes the fearless spirit of American culture. A mountain pine tree extends from the rock, representing America. The words “UNITED STATES OF AMERICA” appear on the rim of the coin just above the eagle. E PLURIBUS UNUM is on the far right of the reverse. Below the eagles feet is the denomination in words “HALF DOLLAR”

This section is going to help you better understand the type of coin in your possession. You might have a Denver minted coin and mistake it for a Philadelphia mint coin or vice versa. The first thing you want to do is check for the mint mark of the coin which is located on the reverse of the coin. The images below would help you better differentiate the coins and know which one you have.

The second highest to strike 1944 half dollars was the Denver mint. It struck a total number of 9,769,000 coins. While a lot might complain of the number being quite low, this coin is only scarce in higher grades.

If the half dollar in your possession bears a “D” mint mark on the reverse, it therefore means the coin was struck in the Denver mint.

The least mint to produce 1944 half dollars was the San Francisco mint. With only about 8,904,000 coins struck in total. Coins from this mint will also bear a mint mark on the reverse, you can find the mark at the bottom right of the coin as indicated in the image above.

If your coin doesn’t have any mint mark or you can barely see the mark due to wear on the surface or some other reason, try using a magnifying glass or seek professional help.

One drawback of these coins is the fact that they are increasingly difficult to find in excellent condition. Well-preserved examples do still exist, but they are becoming increasingly rare.

To determine the value of a 1944 Walking Liberty half dollar, collectors should first assess the type of coin they possess. There were multiple types produced every year.

The condition of a coin is also a major factor in determining its value. Typically, more well-preserved pieces are worth more. Below is a chart that can give you an idea of what to expect to pay for one of these coins, depending on its condition and type.

Here’s a plus to having this coin; it is made of 90% silver and the remaining 10% is made of copper, this gives the coin good value even in the worst of grades. The melt value of the 1944 walking liberty half dollar is definitely something to talk about.

Grading The Walking Liberty Half Dollar

Uncirculated: Uncirculated coins are those that never spent any time in circulation. They are often found with their original mint luster and designs perfectly preserved. Their texture feels like they were just minted. Collectors prize these pieces most of all, and they are also some of the most expensive. All images and letters will be readable and in perfect condition.

Extremely Fine: A coin graded as Extremely Fine (EF) has been circulated for a short period of time and may appear to be unblemished but upon closer inspection, you will see light scratching. In the “extremely fine” grade, many Walking Liberty half dollars are considered collectible quality, especially the earlier dates. One of the first areas to check when considering your coin’s grade is a separation of Liberty’s hair from her forehead. The highest areas of her head do show a slight flattening, but the loss of detail is minimal.

Fine: A coin graded as being Fine has been in circulation for a long time, but did not suffer much damage. The coin will show some light and consistent scratching, as well as wear on the surfaces from being passed back and forth over the years.

Good: This is the lowest grade a coin can receive, and it indicates a piece that was circulated for decades and thus has passed through many hands, machines, pockets, safes and just about anywhere you can think of. The date is visible, but the design is merging with both the numeral and the surrounding texture above and below. The branches have flattened with Liberty’s arm and she is an outline.

1944 Half Dollar Value And Price Chart

The 1944 Walking Liberty Half Dollar is estimated to be worth $13 in average condition and can be worth $37 to $53 or more in uncirculated (MS+) mint condition.

The 1944 Walking Liberty Half Dollar is scarcer in mint state condition than the 1941, 1942, 1943 and 1945 issues. Most specimens of the quarter have a white frosty luster, but the strike can sometimes be a bit soft and mushy. This issue is usually not quite as sharp as the other P-Mints, but the Strike isn’t anywhere near as bad as on the S-Mints.

The 1944-S is affected by strike problems, and many mint state specimens are very softly struck through the central devices, specifically Ms. Liberty’s left hand. The 1944-S is the second least collected strike in the Walking Liberty half dollar series, surpassed only by the 1940-S. A 1944-S half dollar with full strike is a rare coin and fully struck examples do not exist.

The answer to this question depends on the condition of your coin. If it is in uncirculated condition, then you could probably get over $5,000 for it. However if it is only in good condition, then you will only be able to get about $13-$15 for it. The reason why this happens is because there are not many people who want to buy coins that are in poor condition and they would rather buy one that is in near perfect condition.

The most popular option is to sell it on eBay, where you’ll have access to millions of potential buyers.

Another good option is to sell it to a coin dealer. This is actually the best way to get top dollar for your coin. Keep in mind that some dealers will only buy from you if they can verify that the coin is authentic

You should always make sure that you know how much your coin is worth before you try and sell it so that you do not lose out on any money. There are many places where you can find out how much your coin is worth, but one of the best places to go is HA.com or PCGS because these sites have a lot of people who sell coins online and they usually have a great reputation when it comes to selling things online.

Where is the mint mark on a 1944 Walking Liberty?

Mint marks are a quick and easy way of identifying where a coin was struck. Whereas the location of the mint mark has appeared at different parts of US coins throughout history, it is currently always located on the reverse (the back) of the coin walking liberty half dollar.

Each Walking Liberty half dollar is composed of 90% silver and 10% copper. The diameter of the coin is 30.63 mm and its weight is 12.50 grams. The silver content of this coin makes it one of the most valuable United States coins from way back.

A Walking Liberty coin can be an affordable way to start a collection. Despite being over 50 years old, many collectors find the Walking Liberty half dollars to be very appealing and want to add the coins to their collections. The 1944 issue of the half dollar is relatively affordable in average condition, if you’d prefer a higher grade in pristine condition, you’ll need to spend thousands to get it (depending on the grade).

Having a 1944 Walking Liberty half dollar increases the value of your collection. This series does mint coins in other years, so if you have coin collecting friends, you might want to let them know about it.