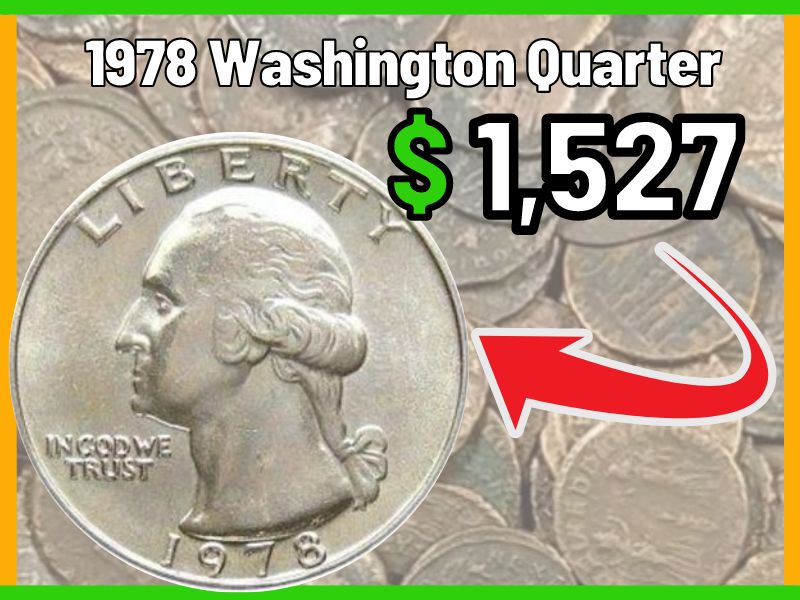 The 1978 quarter with the bust of George Washington on it is like many other US coins. Its value is greatly influenced by its condition and type. While its melt value is a mere $0.0518, It is worth $5.50 to $6.65 in mint uncirculated state. It is worth 25 cents in average condition as of 2022.

The 1978 quarter is often called a clad coin because it has different metals in it. As you may already know, most American coins have an inner core of copper and an outer layer of nickel and copper alloy. This alloy looks like silver making some think it is silver.

If you’re looking for the best examples of clad coins it is the quarter and the half dollar. Recently the Washington quarter inspired interest again and collectors began to demand it. 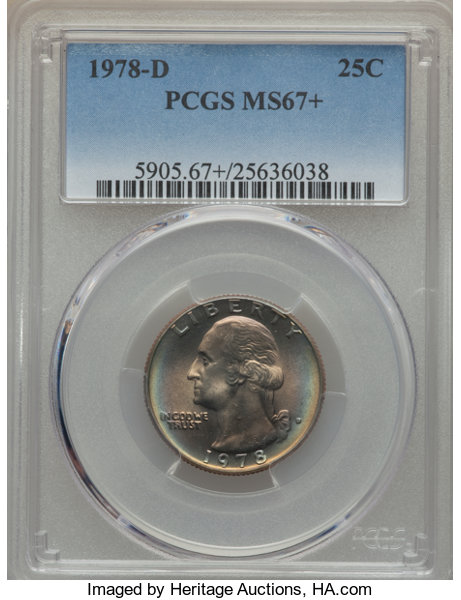 George Washington appears on the face of the coin. The quarter is also known as the quarter dollar, which is worth 25 cents. While the obverse design has remained the same, the reverse has seen several changes since 1998. The quarter has been produced off and on since 1796.

The Washington quarter is not the first quarter that was produced. The one with the head of George Washington on it began its life in 1932. The man responsible for the design was John Flanagan, a sculptor who lived from 1865 to 1952.

Before 1964 the Washington quarter was 90% fine silver but then rising prices in silver necessitated the switch to the Johnson Sandwich, the cladding of nickel with copper.

As the composition changed to meet the period’s needs, so did the design change. The quarter maintained the head of George Washington on the obverse but the reverse went through a few adjustments.

For example, the 1978 quarter had the eagle design also called the Flanagan reverse, Washington quarters from 1999 have a reverse featuring the Crossroads of The Revolution. These quarters are still found in circulation today but most of them are worth a little more than face value.

On the other hand, uncirculated coins are rife and come in a little over their face value. The best bet for a seller of the 1978 quarters is to bring together a large collection and have them graded.

The 1978 quarter comes with obverse and reverse sides that have amazingly outstanding detail. Below are the features of the quarter. 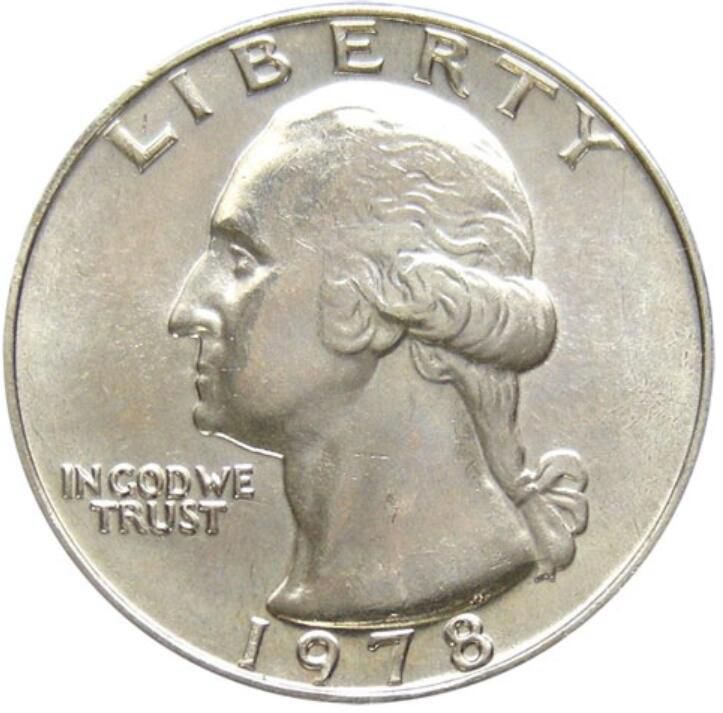 The fact that George’s portrait is facing left on the coin has no real significance, it is simply a design factor determined by Victor David Brenner in a former penny.

George Washington wears a lock in this picture, the words LIBERTY is written on the top of the coin. Below is the date 1978 and in front of Washington’s face is the motto IN GOD WE TRUST. Marked coins have an additional D or S. Quarters made in Philadelphia don’t have marks on them. 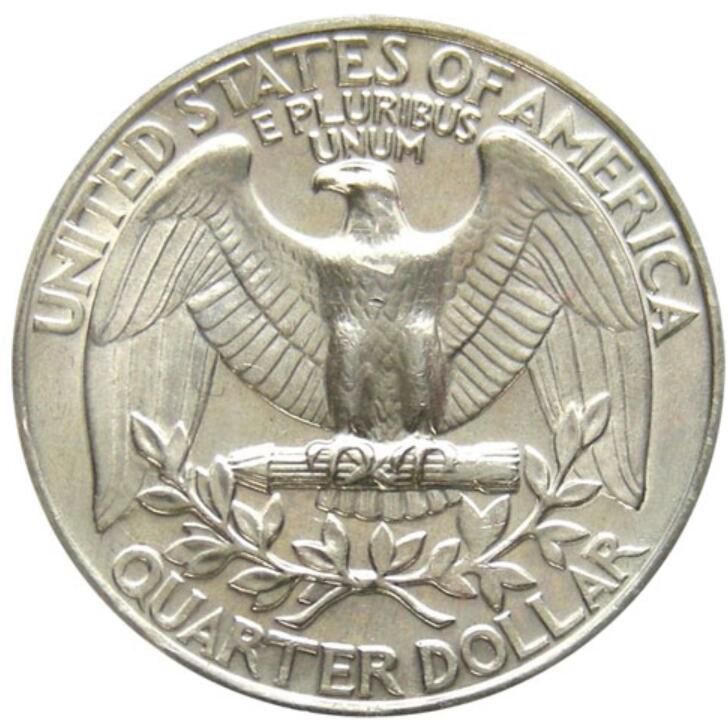 The reverse features the major points inherent in US coins. The eagle is a majestic element here and it’s perched on a bundle of arrows and under that are olive branches. The words UNITED STATES OF AMERICA are over the legend and the words E PLURIBUS UNUM is below that. Lastly, QUARTER DOLLAR is under the olive branches.

There are three mints in the US where coins are made by the authority of Congress. They are the Philadelphia, San Francisco, and Denver mints. Each of the mints made sizable amounts of the quarter and stamped their marks on it, except the Philadelphia mints.

All 1978 quarters notwithstanding the mints that made them have the same design. The only difference is the mint mark on the coin. If you are delving into the art of coin collecting as a novice this shouldn’t pose a problem.

It is true though that coins with marks collect more value than those without. Bar other factors, coins with the mark D or S will bring in more profits than the quarter with no mint mark from the Philadelphia mint.

As already pointed out the value or worth is determined by how high the quarter is graded. Since the no-mint-mark quarter is pretty much available in circulation it will only bring in a high price if it is in mint condition. If you are entering the coin business fresh, the grading of the quarter can follow the PCGS system of grading:

This describes the worst condition a coin can be in. As the word suggests, this coin is not likely to bring in a lot of revenue. For a quarter to qualify the details must be clear for identification. Then poor coins usually have severe damage to them.

This coin is not better than a poor coin in major ways other than that it has no damages like the poor coin. It has a very smooth surface because it has lost most of the sharpness of its details.

This is a worn coin. Details like the details are hard to read because of wear. But they are better than the fair coins.

There is heavy wear here but you can still pick out the major details that identify the coin. Of course, these details are worn down, you are just able to make them out.

There is a lot of wear here too but the design and details are bold enough at first glance.

The rims here are definable, and most of the words are clear to read. You can see the fine details are just about to begin wearing out.

There is very little wear on this coin. You can see both major and minor details without aid and straining your eyes.

This coin appears to never have gone out into the public’s hands. There’s very little wear and may show some contact marks like scratches.

This coin is like the AU50 coin only in that it has almost no marks at all. It is very appealing to the eyes.

This coin is surely uncirculated and never made it into the public but it shows plenty of marks and scratches from its interaction with other coins in the mint. This coin is not appealing to the eyes at all.

This coin is appealing to the eyes, has plenty of lusters, has no scratches, and exhibits a great strike.

This coin shows a sharp strike. There are no contact marks except the one you see with an aid. You will also find great luster.

This coin reeks of a perfect strike and high appeal. Under a magnifier, you will discover some imperfections like scratch marks and flaws.

This is a totally flawless coin, the collector’s delight. This coin is perfectly stricken, the luster is complete. Numismatics would love to lay hands on coins of this nature.

This refers to proof coins, especially those made in the San Francisco mint. The grade runs from 1 to 70 like the MS scale. In comparison, this is like a Choice brilliant gem uncirculated MS 65 coin. You can tell a proof coin from the mirror-like surface. They are distinct like this because they were struck under greater pressure and longer.

When looking for Uncirculated Morgan dollars in MS65 condition, it is best to find examples that have already been graded. In MS66 condition, they are scarce with less than 100 examples graded by PCGS, and none in higher conditions.

Only in MS67 conditions and above does it become scarce. Grades higher than MS68 are rare for the issue and definitely an example worth keeping.

The 1979 Washington Quarter is worth $6.65 or more in Uncirculated (MS+) Mint Condition. More than 3 million (3,127,781) of the S quarter was made in the San Francisco mint. This coin shares the same details as the other types of the 1978 quarter.

By proof, it means the quarters were not made for public use but to be purchased by collectors. Proof coins are usually different in appearance. They feature greater and clearer detail in the design. 1978 S quarters are worth $4.52 graded PR 65. You can spot the S mark in the spot

behind Washington’s lock of hair.

How Rare Is The 1978 Washington Quarter

The quarter minted in the Philadelphia mint which has no mark is not so rare because it was produced in large quality. It is easy to find this quarter in circulated grades. That being the case if you have this coin don’t expect it to bring in so much revenue.

These days it is difficult to find the no mint mark 1978 quarter in uncirculated condition. The rarity also depends on how the coin is graded. 1978 quarters graded MS 65 to MS 66 are rare and valuable so you’d have to grade any coin you have to find out.

Now let’s do a closer check on the value of the 1978 Washington Quarter value based on each type of coin. You will also have charts to help you understand the value and grades at a glance.

Newcomers into the world of coin collection and sale would wonder just where to sell their 1978 Washington Quarter. You can begin your search on the internet for the best spots close to you. You can also find places on the internet.

Note that your quarter would do better at auctions if they are graded. If the outlet you choose doesn’t offer grading services, you can get the services from other professionals.

Other places where you can sell your coin include the following places:

This represents one of the best places to sell your coin. The transaction is faster and they usually provide a good deal without the usual fees that internet auctions deduct from your sale. Also, you may not have to grade your coin before selling it to a pawnshop. The downside is you may not get premium prices for the coin.

You can organize your own yard sale. First, advertise the sale in a local paper or on your social media handles. This method of selling your quarters is effective especially if you have a large collection of coins to sell, not just a few pieces.

One of the first people to consult is coin dealers. First, be sure of the reputation of the dealer before letting go of your coins. A coin dealer will help you identify the coin, probably grade it and provide you with general helpful services that will help your coin get a good price.

The 1978 Washington Quarter was produced in excess of 800 million when you combine all the products from the three mints. If you have quarters that are graded MS 63 and higher, then you are definitely in profit. Hence grading can never be overemphasized.

A newcomer to coin collection can begin with the Washington quarter. The copper-clad quarters were first produced in 1965 so you don’t have so far back to go in collecting. And the coins don’t come in series in one year other than the types. It is important to not have too high hopes for the 1978 copper-clad quarters because, in the series of quarters, this is the least valuable.